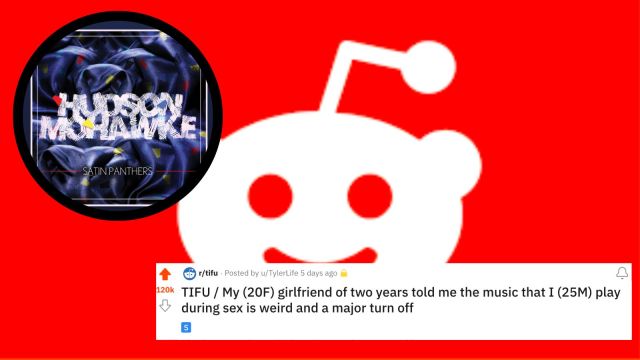 Unless you’ve been living under a rock, you may have heard of “Cbat” by Hudson Mohawke, which recently became a viral TikTok sound. It’s a song with the weirdest ‘squeaky-like’ electronic sound that’s accompanied by a simple drum beat. But despite its basic and simplistic nature, the song went viral lately, amassing nearly 3 million streams on Spotify, and led to this very old song making its debut on the Spotify viral charts.

But the reason for this song’s virality is really weird, funny, and absolutely not safe for work. And this is all thanks to two social media platforms that help brought the song outside the trap music circles. So, this is the story of how this simple 2011 trap song rose to popularity in 2022.

Why is the song going viral?

“Cbat” was released all the way back in 2011. Back then, it was just a simple trap song that attracted a certain type of audience. It’s not the type of song that you’d hear on contemporary radio, but eventually, that song would soon reach ears to a wider audience after the song was shared on social media thanks to a Reddit post.

On Sept. 1, 2022, Reddit user u/TylerLife (that is his real name btw) posted on r/TIFU (Today I F*cked up) that his girlfriend doesn’t like it when he plays the aforementioned song during sex. According to Life, this song helps him perform the best whenever he has sex with his partner. Unfortunately, it took his partner 2 years to voice out her distaste for the song and pretty much made the relationship awkward. He even shared the song in question, which was pretty much the cherry on top.

The song immediately caught the attention of fellow Redditors. However, another social media platform played a role that helped boost the song’s presence; which is where TikTok comes in. Recently, Reddit stories have become somewhat of a nuisance on the platform.

All you need is an AI or text-to-speech voice to read a Reddit story and have either a Minecraft Parkour or Subway Surfers video played in the background. These channels are easy to make to the point where Hank Green suggested blocking these channels if you don’t like seeing them all the time on your feed.

But for those who chose to ignore the YouTuber’s advice, the TikTok page redditrave posted the infamous TIFU post a day later and received over 3.1 million likes, and was watched over 28.3 million times.

From there, people from both Reddit and TikTok were curious about the song, which means Life’s not alone. Back in 2016, Panic! At The Disco’s Brendan Urie revealed to USA Today that this song helped him “get pumped” before his shows.

But the story doesn’t end there, as Life released a follow-up on the same subreddit. Apparently, the original post got so viral that it led to the breakup between Tyler and his girlfriend. Apparently, the girlfriend’s family saw the post, and since his Reddit handle has his real name and age, they instantly made the connection.

Ever since the post went viral on both social media platforms, people constantly asked OP to share his “lovemaking” playlist. And he definitely delivered. On Sept. 5, 2022, Life’s “lovemaking” playlist was released on YouTube, where 13 songs from artists such as Usher, Kanye West, and most notably, Hudson Mohawke were showcased.

And due to how fast things spread on TikTok, the song eventually made its way to Spotify’s Viral 50 – Global playlist. Even Hudson Mohawke was made aware of his song trending on social media, which persuaded the artist to change up his bio and celebrate the song making it to the official Spotify playlist.

From a simple Reddit post to TikTok fame, to the eventual end of a relationship, those were the stages of life that “CBat” had to go through before it went viral. But the reason why this song went viral wasn’t just the post itself, but more on people’s sheer curiosity. They wanted to know why this song was considered to be bad by OP’s ex. And it’s only upon listening to it that people understood why and perhaps had a good, long laugh.