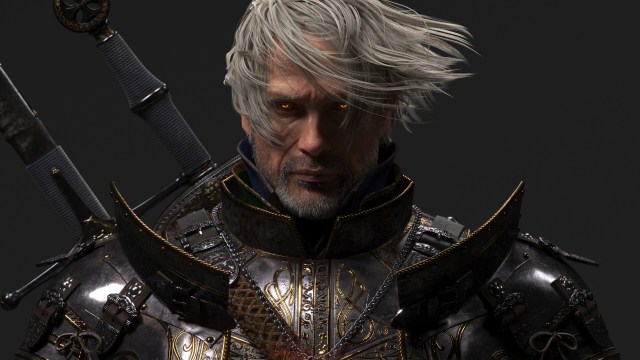 You know how some things when you first hear about them seem absolutely preposterous, but then they make total sense? When trains were invented people thought their hearts would explode from the speed and vibration. When wireless Wi-Fi was invented people assumed it would make them sick.

People are now claiming now that Danish actor Mads Mikkelsen would make a way better Witcher than announced replacement Chris Hemsworth. At first glance; what? The more you think about it, though, the more it makes sense. Mikkelsen brings a range and a depth to literally every role, so why not?

Let’s take a look at five Mads Mikkelsen performances that prove he’s worthy of getting a coin tossed to him.

Fantastic Beasts: The Secrets of Dumbledore

Back in 2020, Mikkelsen replaced a scandal-plagued Johnny Depp as Gellert Grindelwald in the Fantastic Beasts franchise.

Mikkelsen’s performance in Fantastic Beasts: The Secret of Dumbledore was widely praised as the best thing in the Harry Potter spin-off. Mikkelsen plays an incredibly powerful wizard with a complicated storyline that shows not only evil and rage, but tenderness underneath.

Fantastic Beasts: The Secret of Dumbledore proves that Mikkelsen can handle supernatural themes and storylines while still presenting a nuanced character. Part of the fun of Geralt in The Witcher is that while he’s inherently good, he’s also a murderer who kills things for money.

Mikkelsen would be able to pull out the more subtle parts of a Geralt performance, something Henry Cavill did very well in the role.

In 2016’s Doctor Strange, Mikkelsen plays a character named Kaecilius, a sorcerer who also knows kung fu. The role demonstrates Mikkelsen’s ability to play a character that’s physical and an ass-kicker. Mikkelsen does play villians frequently, but this one is squarely in an action franchise wheelhouse.

Mikkelson told EW that playing the character was a “dream… it’s flying kung fu! I didn’t hesitate…. it’s a childhood dream. Bruce Lee was my biggest hero and still is. At the age of 50, you get to do stuff that you probably should have done when you were 15. But hey, who am I to say no?”

This is a role that proves Mikkelsen could handle the necessary physicality for the part of Geralt. And presence? Mikkelsen has buckets of it.

Chaos Walking was a box office bomb, but once again Mikkelsen delivers a layered performance as mayor David Prentiss, a man with a dark secret.

Mikkelsen once again demonstrates his range in the movie. He somehow manages to appear kind and terrifying all at the same time, and provides another example of how much gravitas he would bring to the role of Geralt of Rivea.

We also get to see Mikkelsen on a horse and he looks great doing it! That’s one less thing he has to learn how to do, or would, if he somehow ended up in The Witcher.

In Rogue One, Mikkelsen plays Galen Erso, the man responsible for creating the flaw in the design of the Death Star that was ultimately used to bring it down.

Erso is a complicated character. He’s a part of the Empire, but fled and ended up witnessing his wife’s murder at its hands. He was forced to complete his work and eventually died in his daughter’s arms after passing along the secret to defeating the Death Star.

What’s great about this role is the duplicity required. He had to pretend to be working for the Empire all while trying to sabotage the Empire. The scenes where he has to witness his wife’s death are also heartbreaking. There’s no doubt that Mikkelsen could use these skills as Geralt.

Clash of the Titans

Clash of the Titans from 2010 is probably the most concrete example of what Mikkelsen as Geralt would look like. His hair is braided, he’s wearing medieval armor, and he’s a menace with a sword; all skills that would be necessary for The Witcher.

His natural ease with a sword and innate charisma shine through brightly in this film. He also tones down the ‘quiet and evil but compassionate’ act that he uses so often for something more valiant and hero-like. It also shows that he knows how to have a little fun in a role, and allows that to translate on screen.

The more you think about it the more it becomes clear: let’s lose Chris Hemsworth and get Mads Mikkelsen in The Witcher. While it’s a longshot, it’s also Hollywood, where pretty much anything is possible.