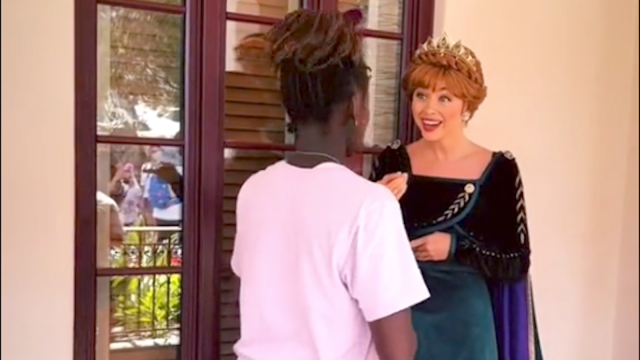 Disneyland truly became the happiest place on Earth for 11 year-old Zoe Tapley during her second family trip to the Anaheim, California amusement park earlier this summer. Upon meeting the character Princess Anna from the Disney movie Frozen, Zoe, who is Deaf, soon realized she could communicate without needing a sign language interpreter.

The encounter was captured by Zoe’s mother, Jeanette Tapley who shared to video on TikTok, saying, “Zoe has never been able to chat with a princess without Jesse or myself interpreting. This was magical. Thank you Princess Anna for making our trip so special!”

The magical moment sparked an avalanche of media coverage from outlets like CBS, Upworthy, and Good Morning America. Although it occured in July, the incident has once again been shared by the popular news outlet NowThis on Twitter, causing a whole new wave of joy from people on the internet.

Shortly after the video’s release, Jeanette Tapley shared a follow up video to TikTok, interpreting Zoe and Princess Anna’s conversation. She explains that Princess Anna introduced herself to Zoe by sharing her name sign and asked if this is the first time Zoe’s been to Disneyland. Zoe said this was her second time, and that she came with her family.

Name signs in the Deaf community are specific signs assigned by Deaf person to help identify someone without having to spell the letters of their name alphabetically. Princess Anna’s comprehension of not just ASL but Deaf culture is the cherry on top that makes this moment all the more special.

In a world where good news is often eclipsed by the bad, this wholesome encounter is a reminder that a camera need not be pointed at a good deed for it to exist, and that nothing is too small to make an impact on someone’s life.