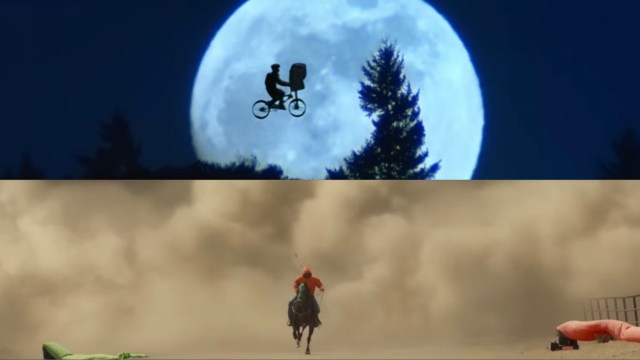 E.T. image via Amblin/Universal, NOPE image via Universal
Review of:

Since 2017, director Jordan Peele has been on a tremendous run. His Get Out has made him into a thinking man’s horror creator, has since earned him comparisons to other icons, and, now, the NOPE director is indicating he approves of at least one equation.

An article newly published by The Hollywood Reporter which features Peele alongside Chinonye Chukwu, Daniel Kwan, Martin McDonagh, Rian Johnson, and Tony Kushner, who reveals he likes the fact Peele’s latest work flips the Spielberg gaze convention on its head. In Spielberg films, main characters head towards the unknown. In Peele’s movie, characters try to stay away from the epic thing in front of them. As for Peele, he loves the analogy.

“‘The reverse of the Spielberg gaze’ is such a cool way to put it. Obviously, I’m hugely inspired by his work and filmmakers who shoot for the moon and go for magic. When I was writing in 2020, George Floyd protests were going on, so I also wanted to create a film that indicted industry that’s kept us out of conversation and present the dangers of bad miracles and chasing them, but also give my characters their weapon and agency to get there and reclaim. This was, in many ways, a love letter to those films, but at the same time, I found something in myself that I had to be honest about, that I’m chasing a spectacle.”

Later in the report Peele also weighs in on the merits of improvisation on a set. While this has sometimes resulted in better work being made, this is not always the case and, for Peele, it is fine to do, but you also have to be safe and keep with your structure.

“You definitely want the actors to feel like they are improvising. That’s when they’re doing their best. If you do enter an improvisational space, something you’ll hear a lot on a film is, ‘OK, let’s get one on-book, just for safety.’ As a writer, you’re trying to put the best script forward. As a director, you’re trying to be open and get energy out of it. So, the idea for me is always, as long as I get the protected version of the script done, then let’s also try to beat it.”

Peele will appear next in Abruptio. He has a number of projects in development and recently produced Lovecraft Country. His earliest work included some short films in 2008 before getting into Little Fockers in 2010, and he spent a number of years on Mad TV for Fox, then collaborated with Michael Key on Key & Peele on Comedy Central To date, his honors include an Academy Award for writing, a Britannia Award for directing, and an Emmy Award as well.

His most recent film NOPE was praised and Peele has since gone on record after its release about his hope for an extended cut of the movie. He also used his talents to bring back the Candyman horror franchise as a producer, though views of it are divided.