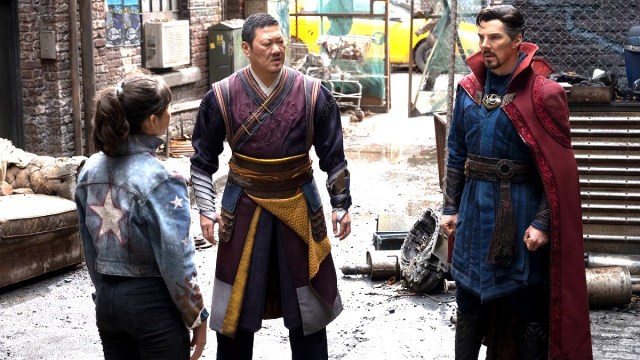 Doctor Strange in the Multiverse of Madness was a huge hit and made almost a billion dollars at the box office. That doesn’t mean it magically came together in an instant. There was a lot left on the cutting room floor, included a potential villain.

Posted from the Twitter account/fan page, Doctor Strange Updates, revealed concept art featuring an adversary who was in the original script but got cut out during rewrites: Nightmare.

The “Waldron” referred to in the Tweet is, of course, writer Michael Waldron, who said the addition of the Multiverse element made it hard to decide who would ultimately appear in the film, according to Nerdist. In addition to Nightmare, Waldron said another character named Phone Ranger didn’t make the cut either.

“I wrote a near and dear character to my heart, Phone Ranger, who’s just a ridiculous phone-based superhero. He met a grizzly end in the original draft of my script, but he didn’t make it in.”

Turns out there were even bigger plans for Nightmare, who was originally supposed to be the main baddie of the movie in Derrickson’s original script. Once the Multiverse aspect was introduced and Waldron took over the script, it became clear that the dream of Nightmare wasn’t going to make the cut. As Waldron told Den of Geek:

“There was different stuff. I think it’s been reported that, once upon a time, there was some talk of Nightmare and stuff like that. But when I came on board, it was a multiverse story. And so it was always about trying to figure out who that Multiversal adversary was going to be.”

Doctor Strange in the Multiverse of Madness is currently streaming on Disney Plus.