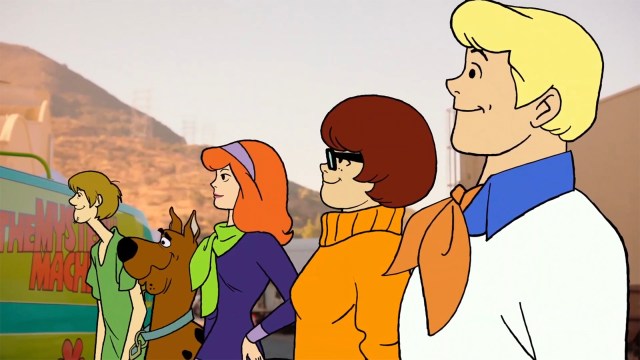 Ever since Scooby Doo, Where Are You? premiered in 1969, fans have had questions about the show. How can Shaggy understand Scooby? Is Scooby the figment of Shaggy’s stoned imagination? Why would a person eat dog biscuits?

A Reddit theory opened a can of worms by connecting the beloved cartoon to the Vietnam War.

You read that right. User bigelow6698 believes that Fred Jones and Norville “Shaggy” Rogers dodged the draft to keep from serving in the Vietnam War. That would make Scooby Doo, Where Are You? a pseudo-political show, since the show’s creators, via the characters, would then have been making a statement about one of the United States’ most senseless conflicts.

“Scooby Do is supposed to take place sometime in the late 1960’s, when the Vietnam War was going on. The entire gang looks like they are probably young adults. If Shaggy and Fred are between the ages of 18 and 25, they would be eligible for the draft.”

There’s no arguing the logic, and Reddit user Heretical_Cactus added that Fred’s parents may have kept him from joining the war effort while Shaggy could have suffered from PTSD.

“Fred’s (adoptive ?) parents are loaded, he paid to not be drafted

“Or he is on the run because he deserted”

Bigelow6698 isn’t alone in this line of thought. Three years ago, CNN published an article on the correlation between the show and the social turmoil at the time.

With so many questions hovering over Shaggy, the theory lent to explanations about the beatnik’s odd behavior. InfiniteEmotions pointed toward Scooby being a Great Dane as evidence that Norville Rogers was in the military. “Would explain his extreme reactions to vaguely spooky situations. Even Scooby could be explained because a lot of veterans with PTSD (or ‘shell shock,’ as it was known at the time) got large dogs.”

Probably the most thought-provoking response came from yourmartymcflyisopen. The user took the theory to heart and practically wrote an essay, detailing how the entire series may be happening in Shaggy’s imagination.

“Nah Shaggy served and watched people die, the entire show is actually his PTSD and drug fueled night terrors spilling into his every day life as hallucinations. Scooby-Doo is his service dog who he hallucinates as having a personality- the personality of his dead brother who was killed by the Vietcong, whos dream it was to open a sandwich shop after the war. The Monsters that they chase are a combination of 3 things depending on the type of monster and setting- 1. Shaggy chasing the dragon (another term for heroin use. Notice every monster is not actually a monster, it’s just an old dude in power who’s trying to hurt people (sorta like politicians), so there’s really no payoff since there’s never actually a monster, hence why they keep getting in this mess, shaggy keeps shooting up), 2. (If the episode is in a swamp, jungle, or is Asian inspired) Shaggy is having fictionalized flashbacks of his actual time in Vietnam, or 3. The monsters represent Shaggy’s demons and civilian post-war responsibilities, which he is always running from.

“Shaggy uses Marijuana and Heroin as a coping Mechanism which causes him to hallucinate Scooby-Doo talking, and makes him very hungry.

“Fred is a ‘Boyscout’ type because he represents one of Shaggy’s platoon leaders- a rich kid who wasn’t drafted, but signed up for the war thinking he would come out a hero, setting off traps and leading their gang (squad) to a victory, only to have the traps fail, and his ideas shattered by morally questionable guerilla warfare tactics, he played it too close to the book, and it got many men killed, including Shaggy’s brother, Scoobert (it’s not weird to think his brothers name could have been Scoobert, shaggy’s name is literally Norville).

“Velma is Shaggy’s therapist at the Veterans hospital, who walks him through his hallucinations and flashbacks by offering him his PTSD medication (Scooby-Snacks) before each session so he can brave his way through their discussion.

“And Daphne. I haven’t figured out a place for Daphne in this idea, feel free to add on.”

The Vietnam War theory certainly adds layers to the kids’ cartoon. Maybe it’s time to give it a second viewing.