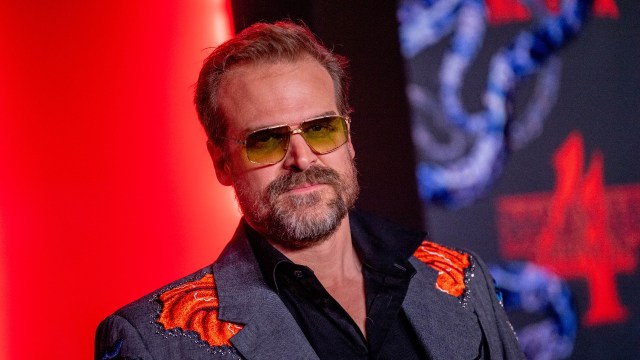 It’s safe to say that David Harbour owes much of his success to Netflix’s Stranger Things. Before 2016, he had landed some supporting roles in feature-films such as Brokeback Mountain (2005) and Quantum of Solace (2008), but it wasn’t until he was cast as Hawkins Police Chief Jim Hopper that his star truly began to shine. Shortly thereafter, he snagged big roles in Hellboy (2019) and Marvel’s Black Widow (2021). Stranger Things was also Harbour’s biggest exposure to child actors; he spent the most one-on-one time with Millie Bobby Brown, who plays Eleven, but he also shared several scenes with Finn Wolfhard’s Mike Wheeler. Although apprehensive at first, Harbour attests to being “blown away” when he worked with Wolfhard on Stranger Things.

It isn’t until Stranger Things 3, when Mike and Eleven officially start dating, that Harbour’s Hopper properly interacts with Wolfhard’s Wheeler. They share a handful of scenes together before then, mostly with other actors.

David Harbour shared with IndieWire further details about his time working with Finn Wolfhard. He mentions that he was “nervous” in the beginning, having never really worked with kids before and describes how impressed he was by Wolfhard’s innate freedom in his body, saying that he and wished he could do the same.

Early on, I was nervous about working with kids cause I’ve worked with adults a lot. You’re always a little bit nervous about show kids who are so presentational. I think it was really one of the first scenes I had with Mike — Finn [Wolfhard], and I remember him being so almost unaware of his body. He had this freedom where he was just moving his shoulders and his arms and clearly wasn’t thinking about doing it.

He just was free as an actor in a way that I hadn’t seen before, in a long time, and I certainly hadn’t felt, and I was blown away by that. I was like, “God, I wish I could do that. I wish I could be free and unselfconscious.”

It’s certainly rare for a veteran actor like David Harbour to be jealous of now-19-year-old Finn Wolfhard’s acting prowess, but that is undoubtedly a testament to how talented the Canadian actor is. It also serves as proof that the pint-sized Stranger Things cast are some of the best young actors around right now; not only blowing David Harbour away but also the entire world.

David Harbour and Finn Wolfward return as Jim Hopper and Mike Wheeler in Volume Two of Stranger Things 4, which arrives on Netflix on July 1.