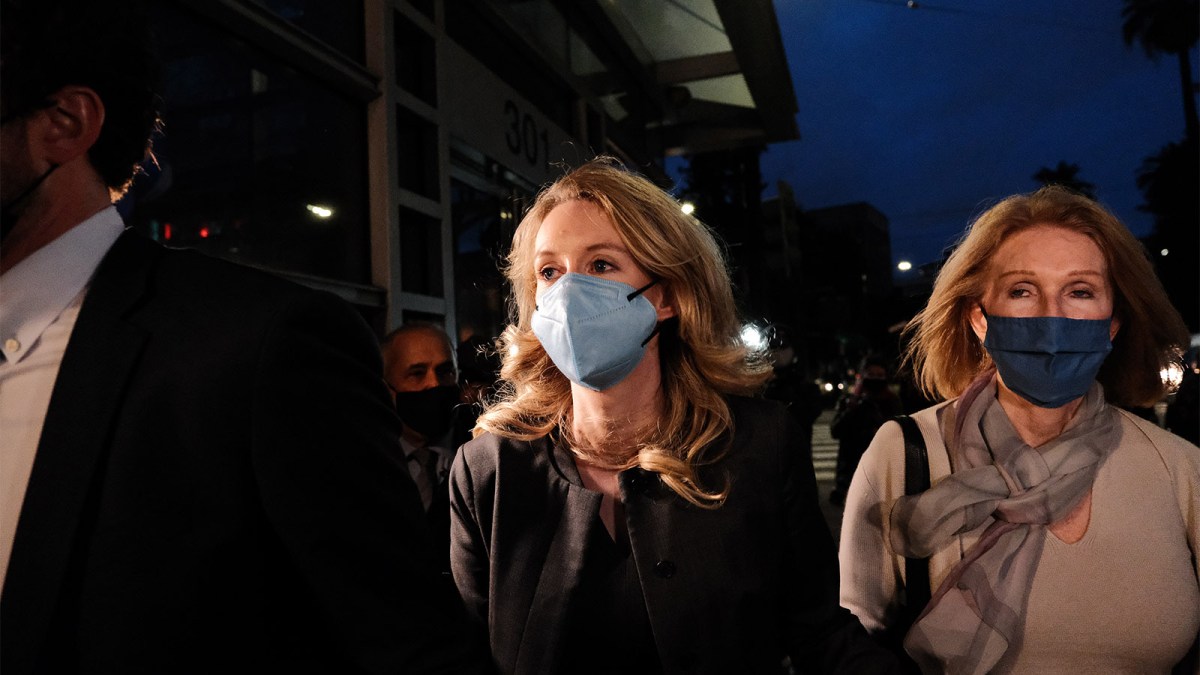 Forbes named Elizabeth Holmes in 2015 as the youngest and wealthiest self-made female billionaire in America — based on the estimated $9 billion worth of her now-defunct health technology company Theranos. And on Jan. 3, 2022, Holmes was found guilty on four out of 11 federal charges of defrauding investors.

Before the verdict was even announced, a feature film starring Jennifer Lawrence and directed by Adam McKay was being developed by Apple Studios, and a Hulu limited series called The Dropout starring Amanda Seyfried is set to premiere on March 3, 2022.

But who is Elizabeth Holmes? And why is there so much public fascination surrounding her and Theranos, to the point that her life and business endeavors inspired both a film and series?

The early life and education of Elizabeth Holmes

To fully understand the 37-year-old Silicon Valley entrepreneur’s meteoric rise and subsequent fall to disgrace, it’s best to start from the beginning. Interestingly enough, Holmes’ father, Christian Rasmus Holmes IV, was a vice president at Enron, an energy company that went bankrupt in Dec. 2001 due to an accounting fraud scandal.

In 2002, a year after Enron went bankrupt, Holmes began attending Stanford, studying chemical engineering and working as a student researcher and laboratory assistant. Following her freshman year at Stanford, Holmes worked in a laboratory at the Genome Institute of Singapore. It was here that Holmes first got the idea to revolutionize blood testing after testing positive for severe acute respiratory syndrome coronavirus (SARS-CoV-1) as a result of collecting blood samples with syringes.

By March 2004, Holmes had decided to drop out of Stanford and used her tuition money as seed funding for a consumer healthcare technology company that would eventually become Theranos.

The founding of Theranos

Due to her new fear of needles, Holmes was looking to design blood tests that used only small amounts of blood to ascertain instead “vast amounts of data from a few droplets of blood derived from the tip of a finger.”

Though several of her medicine professors warned Holmes that the blood testing technology she hoped to develop would be “impossible,” in 2003, she dropped out of Standford at age 19. She founded the Palo Alto-based company Real-Time Cures, later renamed Theranos. (The name itself is a combination of the words “therapy” and “diagnosis.”)

Yet somehow, Holmes managed to convince Channing Robertson, her advisor and the dean at Stanford’s School of Engineering, to come on board with her idea, and Robertson eventually became the company’s first board member.

The rise and downfall of Theranos

Holmes’ star in Silicon Valley continued to rise over the next several years. She raised $6 million to fund the firm by Dec. 2004, and by the end of 2010, Theranos had amassed more than $92 million in venture capital. Former Secretary of State George Shultz, who served in the Reagan administration, joined the company’s board of directors in 2011. Former Secretary of State and National Security Advisor under presidents Nixon and Ford Henry Kissinger also served on the board and invested $6 million. Over the following three years, Holmes was credited for forming “the most illustrious board in U.S. corporate history,” according to the San Fransisco Business Times.

By the end of 2014, Holmes had appeared on the covers of Fortune, Forbes, Inc., and The New York Times Style Magazine, and her name was associated with 18 U.S. patents and 66 foreign patents.

However, in Oct. 2015, the first of Holmes’ problems surfaced when the Wall Street Journal published a bombshell report about how Theranos had been struggling with its blood-testing technology and that her patented Edison device provided inaccurate results. Among other revelations, the piece claimed that the company had actually been conducting most of its testing using commercially available machines manufactured by other companies.

Though Holmes denied the claims, her legal woes began to pile up considerably from there.

In July 2016, the Centers for Medicare and Medicaid Services (CMS) banned Holmes from owning, operating, or directing a blood-testing service for a period of two years, six months after an inspection of the Theranos laboratory located in Newark, California, turned up operational irregularities with procedures, equipment, and staff proficiency.

The following year, the State of Arizona filed a lawsuit against Theranos on grounds that the company had concealed or misrepresented important facts about 1.5 million blood tests sold to Arizona residents. In April 2017, the company settled the lawsuit for $4.65 million to refund the cost of the tests along with $225,000 in civil fines and attorney fees.

In March 2018, the U.S. Securities and Exchange Commission (SEC) charged Holmes and former Theranos president and CEO Ramesh Balwani with fraud, claiming that the company advertised a faulty product while milking over $700 million from investors. Holmes settled the lawsuit, but the terms included surrendering complete voting control of Theranos, a ban on holding an officer position in a public company for 10 years, and a $500,000 fine.

In addition to attention-grabbing headlines about a blonde, 30-something woman who scammed billions of dollars out of investors, that’s just one component of the public fascination surrounding Elizabeth Holmes.

Like Apple founder Steve Jobs, whom she evidently admired, Holmes was known for wearing a trademark black turtleneck during all public appearances. Another defining characteristic is her deep, baritone voice, which has been the subject of countless debates. Though a few colleagues have come out over the years claiming that Holmes didn’t always speak in such a strange manner, her family has always maintained that her voice is authentic.

Many people have speculated that Holmes intentionally made her voice sound lower so that she would come off more masculine to be taken more seriously in a male-dominated field.

“I actually met her a while ago and I thought her voice was weird,” said Meghan McCain on a 2019 episode of The View. “Like, among other things, because it sort of sounded put-on, among a cacophony of other things I thought was weird at the time.”

“I never understood how she had this magic machine that could take a drop of blood, that could find all your diseases, but no one had ever seen it or tested it,” McCain continued, in a rare show of solidarity across the panel. “And I was like, ‘I could have magic beans in my house if you give me a billion dollars.’ And I never understood it, but I just think if you present yourself in a certain way, you can apparently win over many powerful people.”

It wasn’t until 2019 that Holmes became something of a household name, however, with the release of the documentary film The Inventor: Out for Blood in Silicon Valley, directed by Alex Gibney. The film premiered on Jan. 24 at Sundance and premiered on HBO on March 18.

U.S. Attorney Stephanie Hinds applauded the verdict in a statement via CNN:

“The jurors in this 15-week trial navigated a complex case amid a pandemic and scheduling obstacles,” she said, in a statement that was read aloud by a spokesperson outside the courthouse. “The guilty verdicts in this case reflect Ms. Holmes’ culpability in this large-scale investor fraud, and she must now face sentencing for her crimes.”

Holmes faces up to 20 years in prison in addition to a fine of $250,000 for each count, plus restitution.

Before her conviction, Holmes became engaged to William “Billy” Evans in 2019, the 27-year-old heir to Evans Hotels, and the couple welcomed their first child on July 10, 2021. Holmes has yet to be sentenced, so it’s unclear how much time she’ll actually serve or if she’ll even continue making moves behind bars. Surely, her next great idea is not far behind!