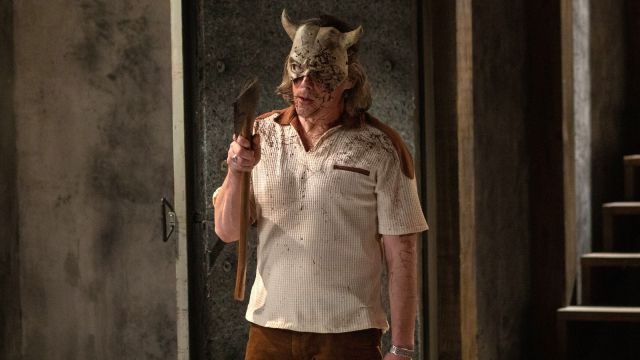 Ethan Hawke has no shame representing his biggest role of the year for Halloween, with him channeling horror’s surprise hit from 2022 for spooky season.

Hawke continued his fruitful collaboration with director Scott Derrickson for The Black Phone, landing one of the biggest box office hits of the year in the horror genre. Grossing $161 million from a budget of $18 million, it’s no surprise Hawke is in a celebratory mood on Halloween for the film.

While other stars dressed up as Rogue, Storm, Pamela Anderson, and Tommy Lee, Hawke went as The Grabber. Somehow, it’s still not as scary as Billie Eilish dressing up as a baby for her party. Hawke captioned his costume simply with “[l]ife imitates art. Happy Halloween” on Instagram.

Fittingly, The Black Phone finds its roots in one of horror’s modern masters. Joe Hill, son of Tabitha and Stephen King, wrote the original short story which Derrickson adapted for film. Derrickson joined the project after leaving Doctor Strange in the Multiverse of Madness due to creative differences with Marvel Studios, but has ended up making an arguably better movie.

Derrickson has spoken of a potential sequel to The Black Phone, with him in conversations with Hill over the potential future of the series. Whatever writing genetics are inherent in the King lineage spell good news for horror fans over the coming future. The helmsman’s previous horror films have included Sinister, The Exorcism of Emily Rose, and Deliver Us from Evil, as he continues to stake a name for himself as an auteur in the genre.

The Black Phone is available to stream on Peacock.