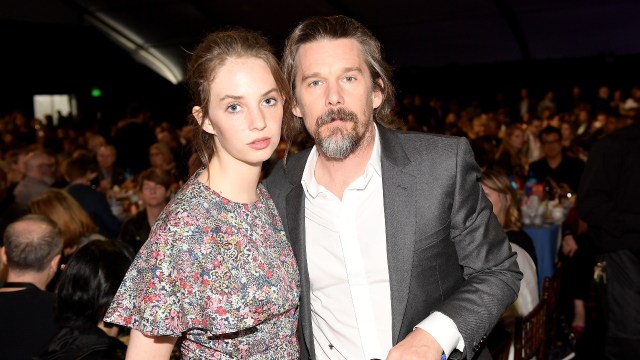 Hot on the heels of his latest horror/thriller The Black Phone, 51-year-old Texan Ethan Hawke has announced that retirement might be on the horizon after also starring in Marvel’s Moon Knight series as Arthur Harrow. Starting out his career in the science-fiction film Explorers, Hawke made a name for himself four years later with the 1989 drama Dead Poets Society. From then on, he landed roles in modern horror cult classics like Sinister (2012), The Purge (2013) and the aforementioned child abduction feature from Scott Derrickson, The Black Phone (2021).

Like father, like daughter. Hawke’s eldest, Maya Hawke — whose mother happens to be Kill Bill star Uma Thurman — has been keeping herself just as busy as her old man. Although she entered the public eye through a career in modeling, Hawke made her screen debut as Jo March in the 2017 BBC adaptation of Little Women. She rose to prominence after landing the role as Robin Buckley in Netflix’s hit science-fiction original series Stranger Things.

Speaking to IndieWire, Hawke has shared the valuable acting advice that he gave to his protégée and 24-year-old first born about the intricacies of filmmaking beyond the fundamentals of moneymaking and fulfilling contracts.

“I’m always telling this to my daughter Maya: It’s not just about this job. It’s about this ability to express yourself. It’s like a spider web. There’s this job, there’s that job, and that job. You step back 15 years later and there starts to be a career. When you look at the breadth of Newman’s career, it’s staggering to look at each individual performance. I can’t pick the performance that I think is the best. Newman’s genius is his consistency over 50 years and his ability to be excellent for so long. I found that inspiring — and intimidating.”

Honestly, Hawke’s advice could be applied to several careers — not just acting — and we could all afford to learn at the feet of the master. Right now, Ethan has wrapped filming on the Knives Out (2018) sequel Glass Onion: A Knives Out Mystery, and is currently shooting the pandemic drama film Leave the World Behind. As for Maya, she recently reprised her role as Robin in Stranger Things 4 and has numerous upcoming projects, including Nicol Paone’s The Kill Room, in which she shares screentime with mom Uma Thurman, Bradley Cooper’s Leonard Bernstein biopic Maestro, and Anderson’s forthcoming Asteroid City. We can’t wait to see the Hawkes in action again, even if Ethan is thinking about calling it quits soon.