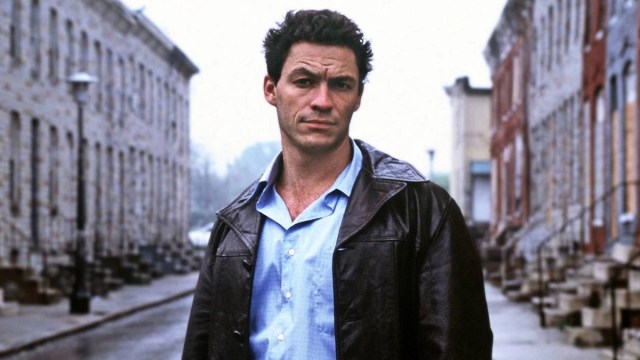 Given that it’s widely regarded as one of the best shows ever made, it’s not as if there are any bad seasons of The Wire. The show, which told a sprawling story of life in Baltimore, and most importantly of the drug dealers and cops who have such a large presence in the series, was never afraid to expand its scope in its attempt to create a sweeping condemnation of the numerous overarching systems, from law enforcement to education to the media, that fail individuals.

Every new season of The Wire introduced some new element of these systems, but the show never lost sight of the many charaters that occupied its world. Some seasons were better than others, but there was something beautiful (and plenty of depressing plot lines) in each and every one.

Widely-understood to be the show’s worst season, there is still plenty in the fifth season of The Wire that’s worth recommending. Season 5 adds journalism to the sprawling world of the show for the first time, and it’s that journalism-centered plot line that ultimately falls a little bit flat. Even if the specifics of the show’s journalism plot don’t totally hold up, the season still works because it adds the final piece to the puzzle of the show’s depiction of social, legal, and economic systems that fail the people they are meant to serve.

Season 5 is The Wire at its most complex, featuring a dazzling array of characters that it accumulated over the previous seasons. There’s a serial killer plotline that doesn’t make a ton of sense, but in its final moments, the show reveals not just how systems fail, but also how they perpetuate cycles of brokenness. There are modicums of hope, but for every one of those, there is someone who slips through the cracks. Nothing changes, and in the series finale in particular, it seems like nothing ever will.

The Wire‘s first season was tight and focused, and the first time the show started to expand its focus, it rubbed some people the wrong way. In season 2, we go to the Baltimore docks and meet a crew of regular guys who are just trying to make ends meet. For so much of the season, though, the stories of these dock workers seems to be almost entirely disconnected from the ongoing conflict between the police and the drug kingpins that defined the first season.

What ultimately redeems this season, though, is the way these stories ultimately converge. We see that the smuggling operation that has defined the show’s dock plot is connected to the drug operations that defined the show’s first season. What’s more, the characters we meet in this second season are just as vivid as the ones that were introduced in the show’s first, and season 2 was the first indiciation that The Wire would not be intimidated by the complexity of the city in which it tells its story.

For some, season 1 of The Wire may be the show at its best. This version of the series was almost entirely focused on a special task force inside of the Baltimore Police Department, and their attempts to infiltrate one of the city’s biggest drug organizations. It’s a story that has been told dozens of times before, but from its very first moments, we get the sense that The Wire is going to tell a different kind of story.

Even in its simplest form, The Wire realized that every character, from the heads of the task force and the drug ring to the lowliest dealers, mattered the same amount. The show knew that each one of its characters was a person, and deserved to be treated as more than a pawn in someone else’s grand scheme. The introduction of Omar, as well as the death of Wallace and its lingering side effects, would have ripples that would last through the rest of the series. The Wire was wonderfully complex, even when it was simple, and it was all the better for that complexity.

One of the most important systems to be introduced after the show’s first season was the political structure that drives the decisions that both cops and drug dealers have to live with. The third season does just that, and also introduces a competitor in Marlo Stanfield. These new characters added further complexity to The Wire, but they kept the story focused on the world of drugs and the people who are trying to clean up the streets.

The third season also features the introduction of “tolerant zones,” an innovative approach to drugs designed to give drug users a safe place to shoot up without being harrassed by police. It’s the rare idea inside the universe of The Wire that works, so naturally, it gets shut down by politicians for reasons that have more to do with optics than substance. Season 3 was The Wire operating close to perfection as a show about drug dealers that cared about the reasons behind everyone making the decisions they were making.

In some senses, season 4 of The Wire is an outlier; a significant portion of the series’ action shifts to Baltimore’s schools, and we come to understand how that system, above and before all the others that the show has already depicted, sets children on certain tracks that will ultimately define the rest of their lives. The Wire is, generally speaking, a pretty heartbreaking show, but that’s never more true than in the foruth season, as we see actual children forced to deal with a world that they didn’t build.

What’s more, the actors that the show casts in these young roles turn out to be uniformly terrific, and the show is smart about surprising us about which characters ultimately wind up filling the roles that we have already seen adults fill on the show. Few shows could pull off the kind of major pivot that we see on The Wire, but in season 4, we meet hugely sympathetic new characters that ultimately redefine the stakes of the entire series to date.