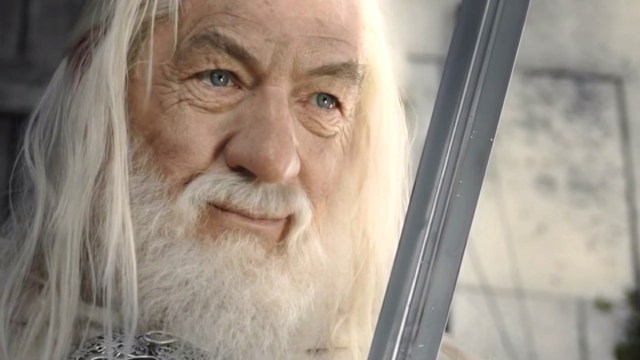 Image via Lord of the Rings: Return of the King

As the premiere of The Lord of the Rings: The Rings of Power inches closer, fans of the franchise are see-sawing violently between eager anticipation and cynical dismissal.

Fans of the books, as well as longtime viewers of Peter Jackson’s early 2000s trilogy, harbor broad concerns that the Amazon Prime spin-off series will butcher Tolkien’s legendary material. Discourse online has long been split down the middle, with half of the fandom willing to put their faith in Amazon Prime’s upcoming series, and the other half prematurely writing the show off as a dud before it even airs.

As this same conversation cycles around once again, one fan took to Reddit to comfort their fellow Tolkien nerds with a simple, but poignant, quote from Sir Ian McKellen. The man who brought Gandalf to life on the big screen has long been considered a legend for his careful consideration of the fandom behind the blockbuster release. Quotes from his time working on the Lord of the Rings trilogy often see him reminding his co-stars of moments from the book, and elements that fans will find important.

He is once again coming to the franchise’s rescue, this time with a quote he uttered more than 20 years ago. All the way back in 2000, in response to fan worry about Jackson’s approach to the films, McKellen attempted to alleviate concerns with a stellar point about adaptations. Now, as the same cynicism once again overtakes portions of the fandom, McKellen’s words are coming back around to comfort us once again.

In the quote, posted by user u/Late_Stage_PhD to the Lord of the Rings subreddit, McKellen noted that “enthusiasts” who’ve read and re-read the books a few dozen times will likely recognize every alteration made to the original story, but in doing so would “miss the point.”

“Peter Jackson’s movie does not challenge the novel’s supremacy any more than the distinguished book illustrations by Howe, Lee et al were meant to replace Tolkien’s descriptive words,” McKellen said. He brought up that recreations of the book in any artistic medium attempt to pay homage to the original, and “augment our appreciation of Lord of the Rings.“

He also brought up that adaptations, in all their forms, are “as old as literature,” noting up that even Shakespeare’s plays were often adapted from “stories, poems, or written history.” Every creative endeavor McKellen has ever ventured into has been approached with respect and the utmost effort to make a stellar final product. The quote makes it clear that he had faith in Jackson’s Lord of the Rings adaptations, and time would prove him right. While some fans find plenty of faults with the original trilogy, few can deny their supremacy among film adaptations. They are some of the best fantasy adaptations we’ve ever gotten — which is perhaps the culprit behind the broad trepidation with which fans are approaching Rings of Power.

McKellen’s words are offering some small comfort to fans harboring concerns about Rings of Power, and reminding them that we are simply rehashing the same concerns aired more than 20 years ago. Those cynical fans were proven wrong when the glory of Jackson’s trilogy finally arrived on-screen, and the same could easily happen when Rings of Power debuts on Sept. 2. Until the show officially drops, however, we can’t know for sure.