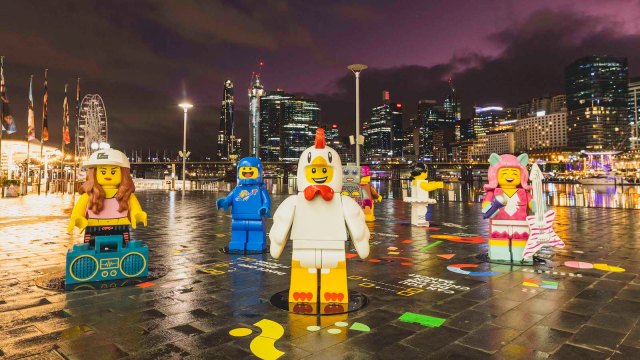 Have you ever been strolling aimlessly, lost in thought, and ended up walking straight into someone? Have you ever done that, except the person you walked into was inanimate, bright yellow, and had a giant hole in the head? If you haven’t, now’s your chance — giant LEGO mini-figures are popping up in some of the world’s most iconic locations.

In case you weren’t aware, LEGO is celebrating its 90th birthday and, in this pretty momentous year, life-sized, not-so-mini-figures are being built, all of them recognizable — Benny The Robot, Strongman, and then some.

But, these figures aren’t popping up because it is the company’s birthday. It’s to celebrate World Play Day, stressing the importance of playtime for both adults and children. In Sydney’s Darling Harbour, 14 figures have been built, each of which comes with its own element of play – moonwalking, hide-and-seek, shredding on the air guitar, and more. And they’ll be there until August 14.

Frankly, this seems like a pretty sweet trade-off. It’s easy to associate LEGO with sleepless nights building, frustration when it doesn’t seem to work because you misread the instructions, or how one simple step can lead you into a world of pain. But now, you can use LEGO to destress and decompress. Just don’t step on them.

In the meantime, or if you can’t make it to these life-sized blocky behemoths, you can revel in the recent creative ways people around the world have utilized their LEGO, building a to-scale model of one of the most iconic Pokémon, or somehow using it to recreate a brutal death scene from Doctor Strange in the Multiverse of Madness.

The LEGO world is your LEGO oyster.