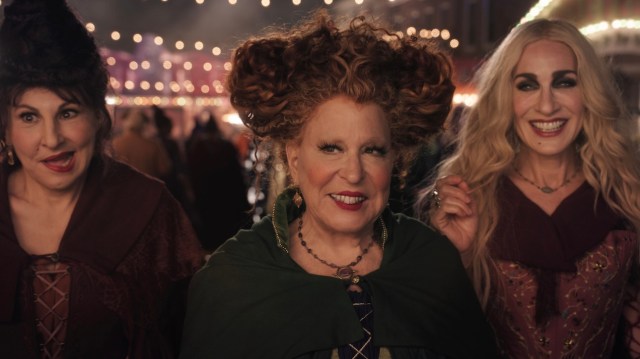 No matter what summer diehards may have you believe, Spooky Season is right around the corner, and Millennials have even more reason to celebrate the annual return of jack o’lanterns, trick or treating, and things that go bump in the night. After a jaw-dropping absence of nearly thirty years, Winnie, Mary, and Sarah Sanderson are back for Hocus Pocus 2. But while the sequel will feature many a familiar face, two of the stars of the original will sadly not appear.

According to director Anne Fletcher, neither Omri Katz nor Vinessa Shaw — who played teens Max and Allison, the Sanderson sister’s objects of torment in the original 1993 film — will be returning to appear in the long-awaited sequel. Although attempts were made to introduce the characters into the new story, ultimately it was too difficult to make an appearance, even a cameo, feel natural. Fletcher told Entertainment Weekly,

“We wanted to weave in all of the people that the fans loved, and when you sat back with all the ingredients and story, you’re like, how do we make this work? It was very difficult to try to have them be a part of it because we did talk about it — painstakingly. You’re trying to stay on track with story, even if they came in as a cameo. People would say, ‘They could be in the background!’ and I’m like, really? You’re going to put the leads of the first movie in the background and be satisfied? You’re not going to be satisfied, you’re going to be angry.”

Bette Midler, Kathy Najimy, and Sarah Jessica Parker will all return in their original roles as the Sanderson Sisters, as will Doug Jones, who reprises his character, the zombie Billy Butcherson, but no one else from the original will appear in the sequel, including Thora Birch, who played Max’s Halloween-loving sister, Dani. Katz and Shaw, who are both now 46, pursued acting following their appearances in the first film. Katz retired in 2002, and now runs a cannabis company in California. Shaw has appeared in films and movies regularly over the last three decades, including a recurring role in Ray Donovan.

The new film will follow a trio of Salem teenagers played by Whitney Peak, Lilia Buckingham, and Belissa Escobedo, who inadvertently summon the Sandersons back to life.

Disney Plus will release Hocus Pocus 2 on September 30.