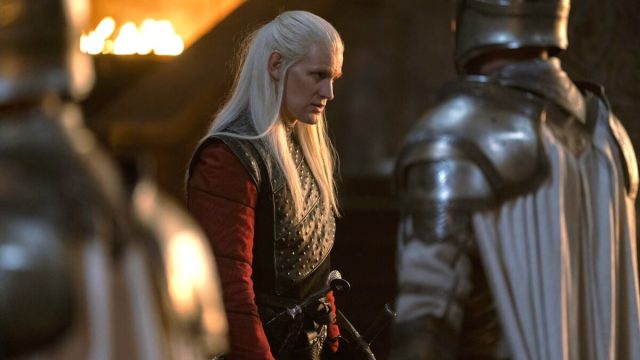 Fantasy as a genre has the ability to bring something new to the table — it is after all, completely made up. However, when it comes to costume design it can sometimes feel like they are recycled, with plenty of leather, loose shirts, and calf-high boots on display.

In the case of Matt Smith’s character in House of the Dragon, fans are certainly seeing a resemblance to another famous fictional character, and they’re not sure they’re okay with it.

One of the most distinguishing features of a fantasy character is the hair, with male characters often sporting shoulder-length or longer locks. Take Henry Cavill’s grimy, but sexy, silver shoulder-length hair in The Witcher as a prime example. Smith’s character in the Game of Thrones prequel, Prince Daemon Targaryen, sports the platinum blonde hair associated with the Targaryen family name, thanks to all that inbreeding. The color and style have fans drawing the obvious comparison with another blonde fantasy bombshell, Lord of the Rings‘ Legolas.

Some fans feel that the look does not translate well from Orlando Bloom to Smith, with it looking like he simply asked for a Legolas wig at his local costume shop.

This fan wonders if the hair is a permanent fixture or will a trip to the salon be on the cards.

Some feel like Prince Daemon looks like a budget Legolas that your mom promises are just as good as the expensive version.

Now it has been said, someone will write fanfiction based on this.

Not all fans are hating on the wig though, some are loving the look even though the comparisons remain.

This fan thinks Smith looks like a crueler version of the elf, and we all love to hate a baddie don’t we?

Similarly, this user is in love with the villainous character portrayed by Smith.

It isn’t just Smith sporting the platinum locks, and one Twitter user has gone and given them a collective noun.

It can make things a lot easier when you forget the many characters’ names.

It would appear that the wig is a bit like Marmite — some people love it and some people hate it. Everyone, however, seems to agree that the resemblance is strong and the jokes far too easy to make.

The first episode of House of the Dragon is now available to watch on HBO and HBO Max, with a new episode released every Sunday.