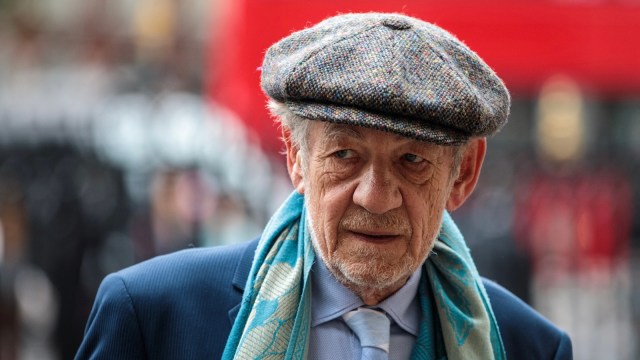 According to a statement made by the Lord of the Rings actor on his Twitter account today, Ian McKellen has been catfished into making a video appearance with what he believed was going to be a discussion with Ukraine President Volodymyr Zelenskyy, but was apparently Russian prankster duo known as Vovan and Lexus, who are supporters of Russian President Vladimir Putin.

According to McKellen’s statement, he received a message that appeared to come from London’s Ukrainian Embassy inviting him to participate in “a private discussion with President Zelensky.” After being encouraged by his own contacts in Ukraine, McKellen agreed to the meeting although he confessed to being surprised at being contacted. Over the course of the voice-only call, McKellen realized the meeting was, in his own words, a “dirty trick” and “declined to cooperate any further.”

Vovan and Lexus, whose real names are Vladimir Kuznetsov (Vovan) and Aleksei Stolyarov (Lexus), have employed this methodology before, in order to fool prominent western media figures into making absurd and outrageous claims regarding the conflict in Ukraine as well as Zelenskyy. In July, author Stephen King fell victim to a similar prank by the duo, as did J.K. Rowling the month before. Both authors had stopped publishing work in Russia following the country’s invasion of Ukraine in February.

The pair are not stand-up comedians, nor are they radio or television performers in Russia, and their stock in trade seems to be solely making prank calls against any and all who are critical of Russia or Russian policy. They “call themselves comedians” as McKellen notes, “which is surprising because their jokes aren’t funny.”