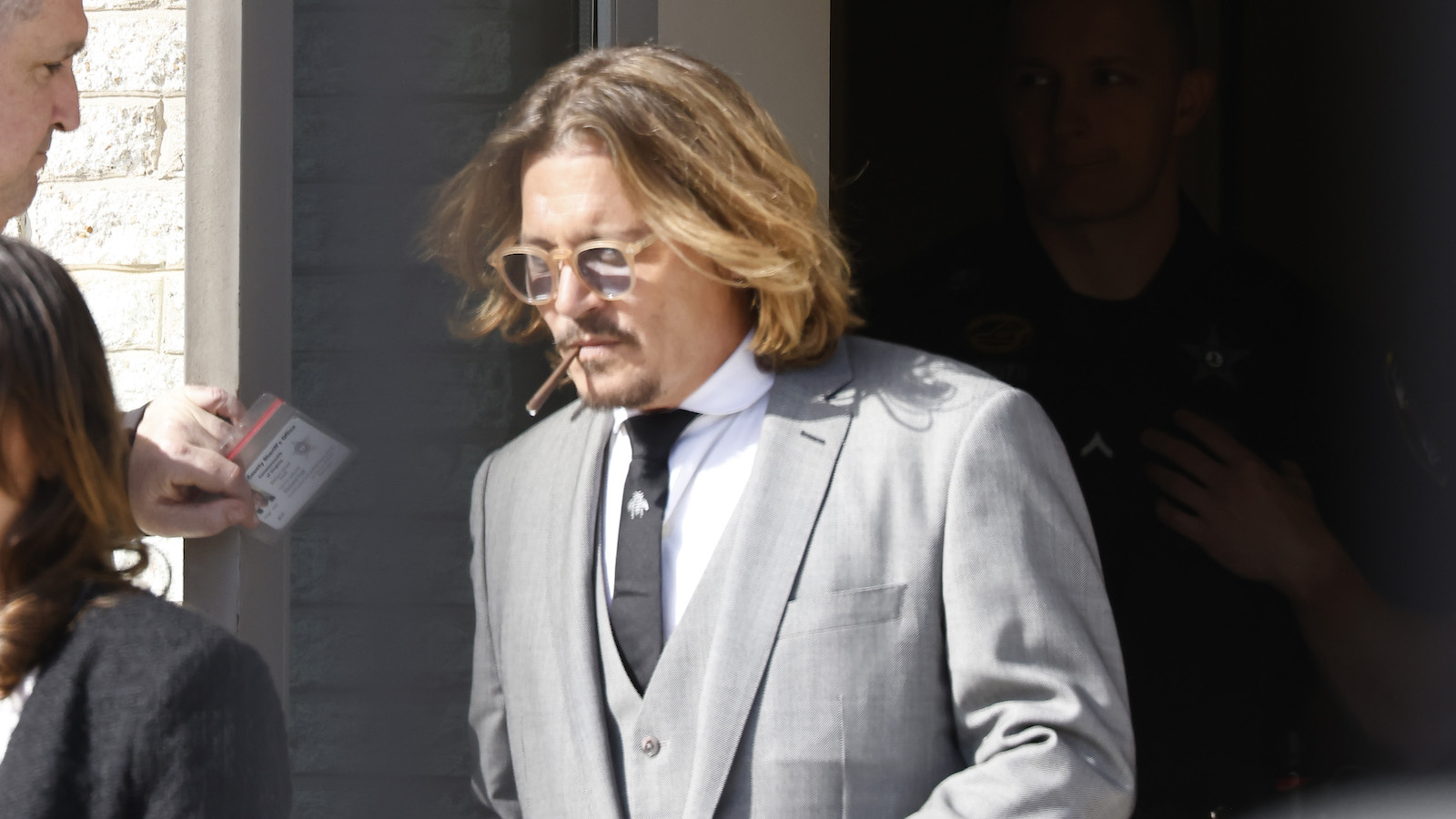 Johnny Depp is calling accusations of drug abuse leveled at him by ex-wife Amber Heard “grossly embellished” during a trial of dueling defamation lawsuits between the Hollywood stars.

Depp took the stand Tuesday in the highly-publicized trial that is unfolding in Fairfax, Virginia, where he earlier called Heard’s allegations of domestic abuse “lies” and “heinous and disturbing.” His testimony was live-streamed on the Law & Crime Network YouTube channel.

Depp is suing Heard for $50 million for defamation. The lawsuit centers around an op-ed Heard penned for the Washington Post in 2018, describing herself as a “public figure representing domestic abuse.” Depp isn’t mentioned in the article, but he argues he was implied as the abuser in question in the piece. Depp denies allegations of domestic abuse, saying the claim damaged his career. Depp’s lawyers say Heard was the abuser in the relationship, not him. Heard is counter-suing, also for defamation, for $100 million.

Depp relayed during his testimony that although he describes himself as “a very private person,” in part to help shield his children from the gaze of paparazzi, he felt it was important “to come up here and stand before you, sit before you all” for the sake of telling “the truth.”

Despite the global recognition for so many years, in part due to Disney’s Pirates of the Caribbean franchise catapulting him into another echelon of superstardom, Depp said he still isn’t used to the fame.

“It’s uncomfortable to hear my own name […] I went from ‘Johnny’ to ‘Johnny Depp,’” with the latter being an image that was “cultivated” by the media and a “commodity,” he said.

“I never wanted to be the poster boy. […] I don’t have that kind of confidence,” Depp said.

The actor also apologized, saying he felt “ashamed” of some of the remarks he made via text message, about which he said he is now “embarrassed.” Depp said the text messages were made in “the heat of the moment of the pain I was feeling” while in a dark place, and that he was using “dark humor” to deal with it. He attributed his writing style over text to being influenced by the gonzo journalist Hunter S. Thompson, a hero to Depp who later became his friend.

Though Depp did not specify the text messages he was referring to, Heard’s former assistant, Kate James, did acknowledge that Depp texted James a message after the pair broke up.

“Come over for a spot of purple and we’ll fix her flabby ass nice and good,” Depp reportedly texted James. When a lawyer asked James if she thought “spot of purple” meant wine and whether “her” meant Heard, James said she didn’t want to speculate.

“This is the way he writes. It’s very random and you don’t sort of question it. … He writes in a very abstract way,” James said in a testimony, via video link last week, referring to Depp.

Depp also detailed his history with drugs during his testimony. Throughout the trial, Heard’s lawyers’ have zeroed in on Depp’s alleged substance abuse. They say his denials of domestic abuse are not credible since he was prone to blackouts from alcohol and drugs, and therefore did not remember anything he did.

Depp acknowledged he experimented with drugs from a very early age, being influenced as a young child by his mother, who dispatched him to go fetch her “nerve pills” from her purse.

“So when I was 11 years old, I wanted to calm down and I didn’t know how to. So I…I bring my mom [her] nerve pills, I would walk away and take one myself to escape caring so much, feeling so much, to escape the..the chaotic nature of what we were living through.”

Depp had earlier gone into great detail about how his mother physically and psychologically abused him, his siblings, and his father growing up.

Despite such early experimentation with drugs, including marijuana at around 11 years old, Depp described his use of substances over the years as being “on and off.” He also said there were “many years” where he didn’t drink.

Depp said Heard mischaracterized his relationship with substances, calling her accusations “grossly embellished,” and saying “a lot of it is…it’s just plainly false.”

“I think it was an easy target for her to hit because once you’ve trusted somebody for a certain amount of years and you’ve told them all the secrets of your life, that information then of course can be used against you,” he said. “I am not some maniac who needs to be high or loaded all the time.”

He also said he was not using alcohol for 18 months, in the period before and during Heard and Depp’s stay in Australia, presumably referring to the time he was filming Pirates of the Caribbean: Dead Men Tell No Tales in 2015. It was during this stay in Australia, reportedly, when Depp got his finger sliced off, which Depp’s lawyers say happened because Heard threw a vodka bottle at him, while Heard’s lawyers maintain it was the actor who injured his own hand.

As an example of the professionalism Depp claims he maintains on movie sets, he insisted “there would be no way” for him and his co-star to be “wasted” the whole time during the production of Fear and Loathing in Las Vegas, even though the characters are on drugs for the duration of the story.

He cited Donnie Brasco as another example of professional rigor; in the film, Depp portrayed an FBI agent, and endured a rigorous training regime that required he eat five meals a day, drink protein shakes, and work out three or four hours a day in order to gain 20-30 pounds of muscle for the role.

“There’s been no abuse of substances on film sets,” he said.

However, Depp did admit he was addicted to the opioid analgesic oxycodone — which he referred to as “Roxys,” based on the prescription name brand, Roxicodone. He said the addiction stemmed from having to throw a “large golden” chair out of a window for Pirates 4, which injured his back.

“As I swung around to throw the, throw the chair out the window, I felt this immediate electricity from, from the bottom of my spine, down to down my left leg,” he said.

He was subsequently prescribed Roxicodone after failed attempts at getting chiropractic treatment. Depp said he “was a little bit worried,” due to having friends who had problems with heroin.

“I didn’t want to get bit by that snake. And I started taking the Roxys and I was bit by the snake,” Depp said. “And then before you know it that… that monkey is on your back to stay.”

He said he was “on the Roxys” for at least four or five years. Rather than being a habit in order to get high, Depp said he began to take it “only so [he] wouldn’t get withdrawals.”

During the course of his relationship with Heard, Depp testified that he eventually detoxed from the opiates, after which he has not taken them again, even after the finger injury. When that happened, he said he took “Motrin 800,” aka ibuprofen, instead of opiates.

Later on in the testimony, Depp said he would sometimes do drugs with Heard’s sister, Whitney Henriquez, saying the two would do cocaine together.

Depp detailed how he met Heard, which was on the set of the film The Rum Diary. The two shared a kissing scene, and despite both actors being in long-term relationships at the time, Depp said that was the genesis of the romance.

Once the relationship began, Depp said he noticed some strange behavior from Heard; Depp recounted her alleged reaction when she was ready to go to bed and he couldn’t sleep and wanted to go to another room to watch TV.

“Rather than go and just lay in a bed and stare at the ceiling, I would say, you know, I’ll just watch… I’ll be either watching TV or hanging out and that was just not acceptable,” Depp said. ”It would stir up some…some rather unusual reactions from her. I didn’t understand why.”

Earlier in his testimony, Depp said Heard got so ingrained in a routine of taking off Depp’s boots, sitting him down, and pouring him wine when he came home from work, that when he tried to take off his own boots one night, she got “visibly shaken.”

Depp also said he became friends with Heard’s friend group, too. One of Heard’s friends, Raquel Pennington, even ended up moving into Depp’s penthouse for free, the actor said.

Depp’s security guard, Sean Bett, said the fights between Depp and Heard had progressed over the years, according to his testimony on Monday. Bett said he even took photographs of injuries on Depp’s face, such as scratches and bruises, but never saw injuries on Heard or heard her complaining of abuse.

Depp’s personal doctor, Dr. David Kipper, also testified Monday that he never heard Depp complain about Heard physically abusing him, nor did he ever witness Depp physically abuse anyone, in his six years of treating him. Dr. Kipper’s nurse testified that Depp had been treated for “scraped and bloody knuckles” after punching a wall during a fight. Dr. Kipper also testified that Depp struggled with the detox from drugs.

Heard is also expected to testify at some point during the trial, which is likely to last more than a month. Other famous names on the witness list slated for testimony, either in person or via video link, include tech mogul Elon Musk, and actors James Franco and Paul Bettany.

Depp is expected to continue his testimony in court for a second day Wednesday.