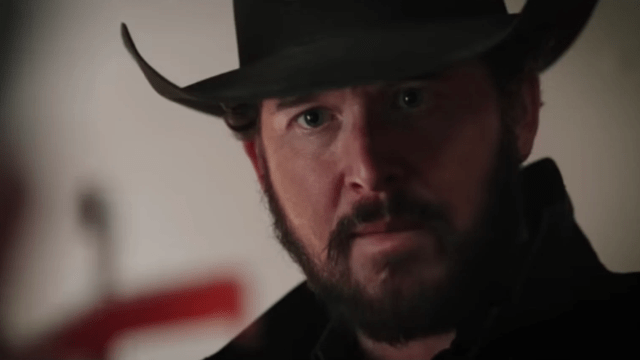 As the pop culture realm enjoys the last day of the weekend, Americans are honoring and remembering the 9/11 attacks that happened in 2001. Twenty-one years later, we stop to pay homage and tribute to the lives lost that day and in the months and years to come. Celebrities also join in to share messages of remembrance and hope each year.

The Yellowstone universe isn’t bursting with news today, but a social media post from Cole Hauser did resonate in the hearts of fans around the country and the world. An exhausted Brecken Merrill also shared an image after a long day of filming, so let’s dig in!

As Americans look back at the tragedy and triumph that followed, it’s important to remember the moments where love was on display — and where it ultimately won.

Hauser’s image sees three firefighters raising the American Flag at Ground Zero. Surrounded by wreckage and covered in debris, they raised the flag as a symbol of hope in the turmoil. The men were later confirmed to be Dan McWilliams and George Johnson from Ladder 157 and Billy Eisengrein of Rescue 2.

The image made front page news in several papers worldwide, and it’s one of the most widely recognized images from 9/11. The moment, frozen in time, brings tears to your eyes when you look at it.

Brecken Merrill breathes life into Tate Dutton, Monica, and Kayce’s son, and his journey through Yellowstone certainly hasn’t been easy.

All things considered, Tate is a very well-rounded kid, but that doesn’t negate the trauma he experienced or the darkness he faced at an early age. On the other hand, he’s also a child that enjoys time with family, riding horses on the ranch, and living as normal a life as you can when you’re attached to the Dutton name.

Merrill loves bringing Tate to life, and he is still enjoying the wild ride that is season 5. As a response to his image, someone asked him if season 5 was almost done filming, to which he responded: “no it’s the never-ending season,” with some added emojis.

Yellowstone‘s 5th season kicks off on Paramount on November 13 with a two-hour television event. If you need to catch up on all of the happenings at the Yellowstone Dutton Ranch until then, you can see the first four seasons streaming on Peacock now.