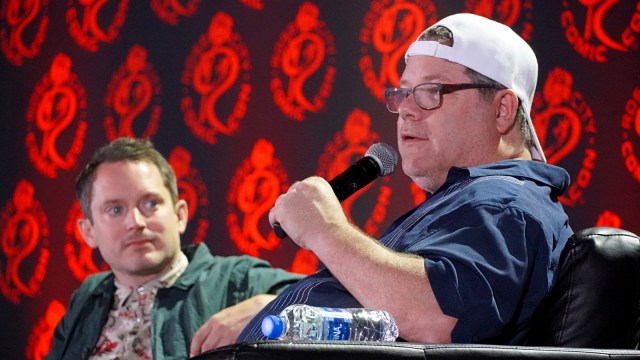 A star from Peter Jackson’s The Lord of the Rings trilogy is confirming a long-held fan theory that there’s something more than a friendship underlying the relationship between Elijah Wood‘s Frodo Baggins and Sean Astin‘s Samwise Gamgee.

Both Wood and Astin hosted a recent panel at Rose City Comic Con in Portland, Oregon, where a fan asked: “I watched Lord of the Rings for the first time a couple weeks ago…I just have to ask, are Frodo and Sam in love?”

However, it appears Samwise may still be in the halfling-sized closet, since the character actually gets married to a female Hobbit in The Lord of the Rings: Return of the King, Sarah McLeod’s Rosie Cotton. Astin gave a nod to this fact by adding, “Don’t tell Rosie.”

Wood didn’t remark on the situation, but gave an approving smile while seated next to Astin. In real life, both Wood and Astin are in relationships — but not with each other — and they each have children with their respective partners.

It has been over two decades since Wood first portrayed Frodo Baggins and Astin played his best friend, Sam, in Peter Jackson’s The Lord of the Rings: The Fellowship of the Ring in 2001. However, fans are still excited about the world of Middle Earth, based on author J.R.R. Tolkien’s original works of literature, thanks to no shortage of media representation, most recently Amazon Prime Video’s new show The Lord of the Rings: The Rings of Power, which takes place thousands of years before the events of the movie trilogy.

When taken all together, including 2002’s The Two Towers and 2003’s The Return of the King, Jackson’s trilogy practically redefined the scope of what a blockbuster film can truly be, with the latter movie even snagging a Best Picture Oscar at the Academy Awards, the first award of that caliber for a fantasy film, as well as scooping up ten other golden statues that same year.

Astin recalled how Steven Speilberg even congratulated him and the cast and crew at the time for pulling off such a milestone.

“I remember when Lord of the Rings won for Return of the King, and we went up on stage for Best Picture and it was like just such this great moment. And then the show was over and Speilberg, who had presented it, was standing there. And I was talking to Liv [Tyler] and him and he said ‘you guys did it.’ He says, ‘You did the thing. E.T. couldn’t do it. Raiders couldn’t do it. Star Wars couldn’t do it.’ He’s like, ‘You made fantasy, you know, this kind of critically acceptable [genre].'”

Recently, Wood, Astin, and other stars of Jackson’s trilogy spoke out in support of the decision for The Rings of Power series to have diverse cast members. The pair of actors, alongside Dominic Monaghan and Billy Boyd, have all been broadcasting the message on social media, “You are all welcome here,” with accompanying apparel that contains a logo of several of the pointy ears of the inhabitants of Middle Earth in a variety of different skin tones.