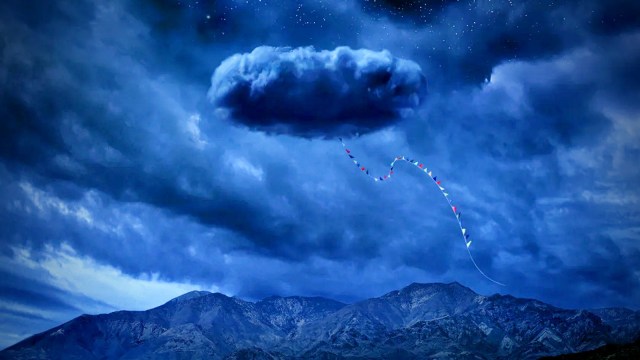 Midnight Mass director Mike Flanagan is giving a nod to another iconic horror director, Jordan Peele, after spotting a suspiciously stoic cloud — the same kind that served as a piece of camouflage for the UFO antagonist in Peele’s Nope.

“I see you @JordanPeele,” Flanagan wrote in a post on Twitter while sharing a couple of photos of the strangely solitary formation.

Few people outside Peele and Flanagan can utilize their name alone to market a horror film, but those two, in particular, are among the best directors working in the genre who can boast such a feat. As such, it’s an absolute delight seeing one director give a respectful nod to another, making us wish the two would perhaps collaborate one day.

A Peele-and-Fanagan co-production was evidently an idea one fan was begging the directors to make happen.

Another Twitter user shared a picture of a similar cloud from a decade prior. Should it turn out to be the very same cluster of aerial water condensation Flanagan spotted, I think we have official confirmation Nope was a documentary, not a work of fiction.

Recently, Peele has hinted that a sequel to Nope might happen one day, since the original film featured characters whose stories we’ve yet to fully explore. Sadly, Flanagan’s prospects for a prequel to The Shining have, by contrast, fallen through due to the box office disappointment of the excellent Doctor Sleep. Maybe if Peele and Flanagan teamed up, their powers combined could convince Warner Bros. Discovery to make a The Shining prequel show on a streaming platform somewhere about Scatman Crothers’ Dick Hallorann, Lord willing.