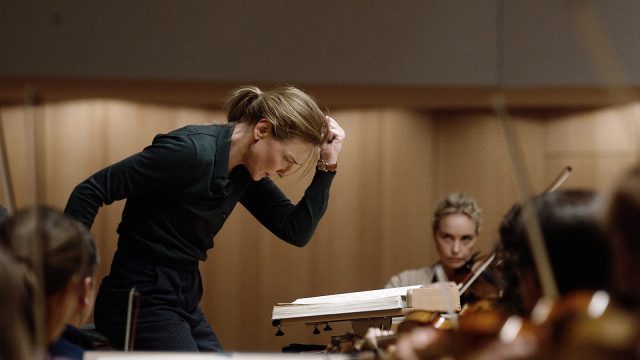 Image via EMJAG Productions
Review of: Review: ‘Tár’ Treats its Audience Like Adults

It’s an odd, if not true-to-life narrative choice. Your mileage may vary. Sometimes a movie has the guts to trust its audience with a challenging story, and that’s worth celebrating, even if it isn’t perfect.

There is a moment during the first moments of Tár, Todd Field’s return to directing when the facade that the titular character Lydia Tár (Cate Blanchett) presents to the world cracks. In a live interview with New Yorker reporter Adam Gopnik (playing himself), the world-famous conductor is asked what she chose to focus on while interpreting one of Mahler’s symphonies. Her reply is, “Love.” The answer earns a charmed response from the crowd watching her, but behind her eyes, there is nothing close to love, even if she believes she’s being honest — there is only a hollow approximation.

Tár is a winding story following the downfall of its main character when accusations of sexual impropriety come to light. When we meet her, the world of contemporary classical music is in the palm of her hand, and Lydia seems capable of manipulating anyone into actions that continue to benefit her. She is, by all means, an awful person. She dangles promises she doesn’t mean to fulfill in front of her colleagues, like assistant Francesca (Noémie Merlant) and business partner Elliot Kaplan (Mark Strong), lies to her partner Sharon (Nina Hoss), and treats everyone as if they are beneath her. Early on it’s subtle: a dismissive comment here, a lie there, but as the movie continues and her downfall escalates, her true nature comes to light.

We don’t see or hear the minute details of the allegations, only getting hushed asides, disjointed flashbacks, previews of emails being deleted, excerpts of tabloid reports at publicity crisis meetings, and Lydia’s haunting nightmares. In a lesser movie, we would get every detail and probably a re-enactment of the events, but here we’re left to pick up the pieces and solve the puzzle on our own. We’re also forced to follow Lydia in all her messiness as she navigates her descent. It’s a challenge sometimes, especially considering the film’s runtime of nearly three hours, but Blanchett is clearly giving us her all in bringing Lydia to light. Her arrogance, her mannerisms, and her increasingly unhinged behavior are all compelling to watch, even if we find her character reprehensible.

There is something terrifying and earnest in Blanchett’s performance, giving Lydia shades and depth far beyond what you would expect in a story like this. With Blanchett’s painstaking work and Field’s direction, Lydia almost becomes as complicated as a real person. It’s such a treat when a filmmaker trusts their audience enough to give us someone like Lydia as the main character. This is especially true in today’s cultural landscape where people expect the media they consume to be indicative of their own personal morals. While it’s a noble goal, it’s narrow — we wouldn’t have great movies, or stories, for that matter, if every tale was so prescriptive. The movie is also visually lovely: from the cold, modern interiors of Lydia’s home and performance spaces to her dreams, everything is precise and crisp when it needs to be. Other times, in Lydia’s dreams, the movie finds space to brush up against surrealism: there are blurred, distorted figures, and in one dream Lydia is sleeping on top of a bed in the Amazon, dreaming soundly until flames burst from her chest. I haven’t even gotten to the costuming, which is equally immaculate.

However, there are some elements of Tár that didn’t work for me. There’s dialogue attempting to use contemporary, socially aware lingo that is condescending early on and earned an eye roll from this critic. The run time is a challenge because the movie does take its time, making you feel every second. It wants you to watch Lydia’s house of cards burn down slowly, but even something as satisfying as her downfall can feel a bit laborious. The downfall itself isn’t a complete one (no specific spoilers here, but Lydia does continue to conduct, just in a very different capacity than at the beginning of the film). It’s an odd, if not true-to-life narrative choice. Your mileage may vary. Sometimes a movie has the guts to trust its audience with a challenging story, and that’s worth celebrating, even if it isn’t perfect.

It’s an odd, if not true-to-life narrative choice. Your mileage may vary. Sometimes a movie has the guts to trust its audience with a challenging story, and that’s worth celebrating, even if it isn’t perfect.