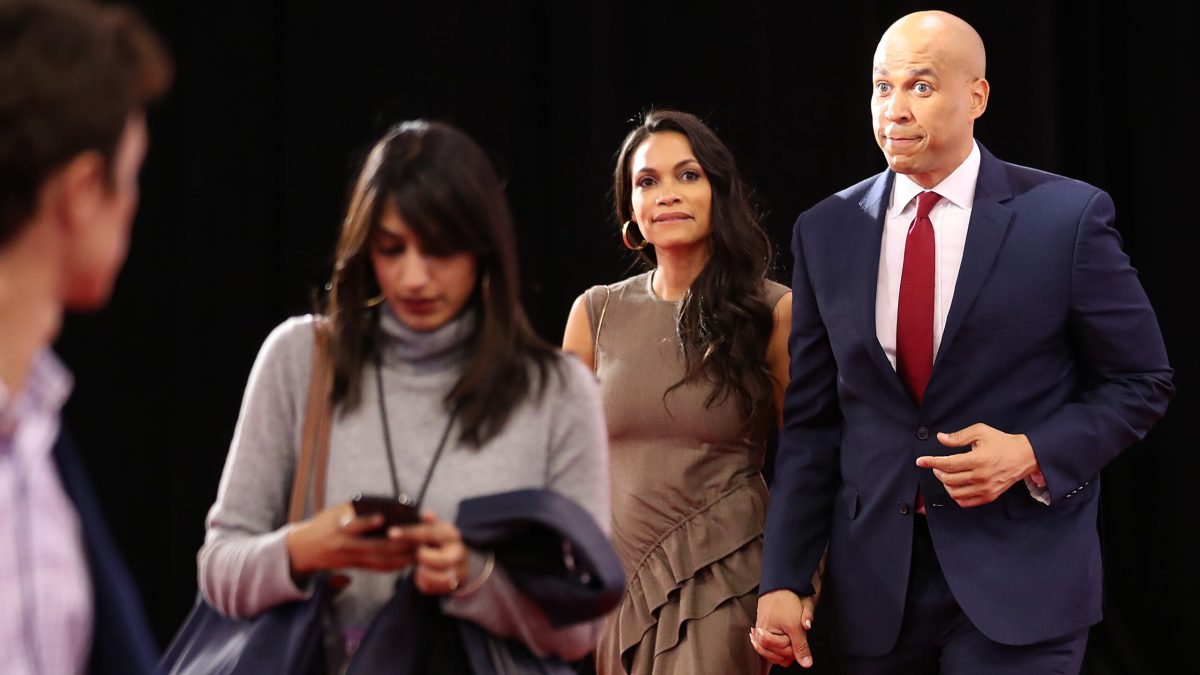 WESTERVILLE, OHIO - OCTOBER 15: Sen. Cory Booker (D-NJ) enters the Spin Room with his girlfriend Rosario Dawson after the Democratic Presidential Debate at Otterbein University on October 15, 2019 in Westerville, Ohio. A record 12 presidential hopefuls are participating in the debate hosted by CNN and The New York Times. (Photo by Chip Somodevilla/Getty Images)

People reported on Monday that the two won’t be celebrating Valentine’s Day together this year, seemingly throwing the chances of Dawson one day becoming First Lady out the window — as Booker was a Presidential candidate in 2020 and may perhaps run in the future.

The two met in 2018 at a political fundraiser, and it was confirmed that they were dating a year later. According to the Washington Post, reporting on the courtship, their meet-cute was more awkward than typical.

‘”Uh, how would I get in touch with you?'” Booker shared in the article, then relaying, “And she mercifully said something like, ‘Oh, you want my phone number?’ And my insides were like, ‘Hell, yeah!’ ”

Dawson publicly supported Booker after he dropped out of the 2020 Democratic nomination race ultimately won by now-President Joe Biden.

“Cory, you continue to inspire me every day,” she said, quote-tweeting his campaign suspension tweet.

“On this journey, you and your remarkable team have represented the best in us and I know you will continue to,” she gushed. “Thank you. I see you. I love you.”

Later that year, the two moved in together. This was the first time that Booker had “really lived with somebody,” he told Buzzfeed.

Booker’s thoughts on love seem to be healthy despite the breakup. Today, he shared a tweet about love this Valentine’s Day.

He wasn’t the only one to wish the world a Happy Valentine’s Day. Dawson is also active on Twitter today. She retweeted a nod to the 2019 Wonder Woman: Bloodlines animated movie, in which she plays the title character.

Perhaps we will know more later on about why they separated – though according to People‘s article, it happened on good terms and they remain friends. For now, we can wish them each a Happy Valentine’s Day and appreciate their mature approach to breaking up.