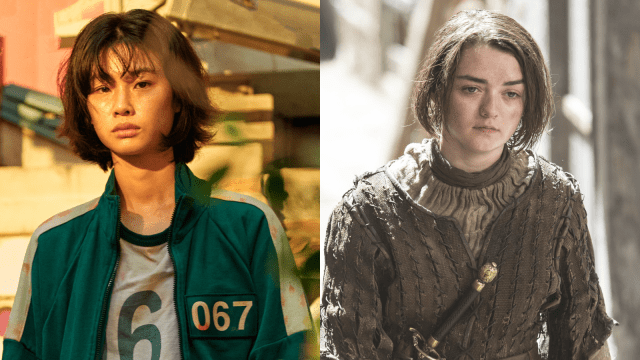 HoYeon Jung, star of the cultural phenomenon Squid Game, is preparing for her life outside of the series. The Korean actress and model was one of the breakout stars of the series and has since won a SAG and Critics Choice Award and earned an Emmy nomination for her role as Kang Sae-byeok. Now she is looking forward and taking inspiration from one of her favorite television show characters, Game of Thrones‘ Arya Stark to give her strength.

The actress appeared in W Magazine‘s third annual TV portfolio, which saw 21 prominent figures in television today pay homage to their own favorite characters from the small screen. Speaking to the magazine, Ho-yeun discussed how she actually came to Game of Thrones a little late, when there had already been seven seasons aired. Working as a model at the time, the star talks about how she binged the show in her off time.

“At that time, I was in New York. I didn’t have anything scheduled for almost a week, so I was just staying at home. I didn’t want to go out. I was so lazy. And then I started Game of Thrones, and even though I watched the whole day, still there were lots of episodes to see.”

One of the things that drew her to the show was the representation of female characters, in particular the small but deadly Arya Stark.

“And there are so many badass women characters. I chose Arya Stark because I liked her whole journey, especially when she goes out to find her own life. She finds everything herself; she always makes her own decisions. And I like the fact that she can fight like a professional. That’s a woman who, pretty much, I want to be.”

The actress is already taking life into her own hands, saying she feels like she is already halfway there, saying “I think I end up just doing whatever I want to do.” Her next project is in Alfonso Cuarón’s upcoming Apple TV Plus series, Disclaimer where HoYeon will be starring across from Cate Blanchett and Kevin Kline.

And though we all saw her demise in the show Squid Game, she could possibly make a return to the show with creator Hwang Dong-hyuk having suggested that she could come back as Sae-byeok’s twin.

Regardless of whether or not she returns to the show, the actress has a bright future ahead of her, and with a little help from Arya Stark, she is bound to carve her own way.