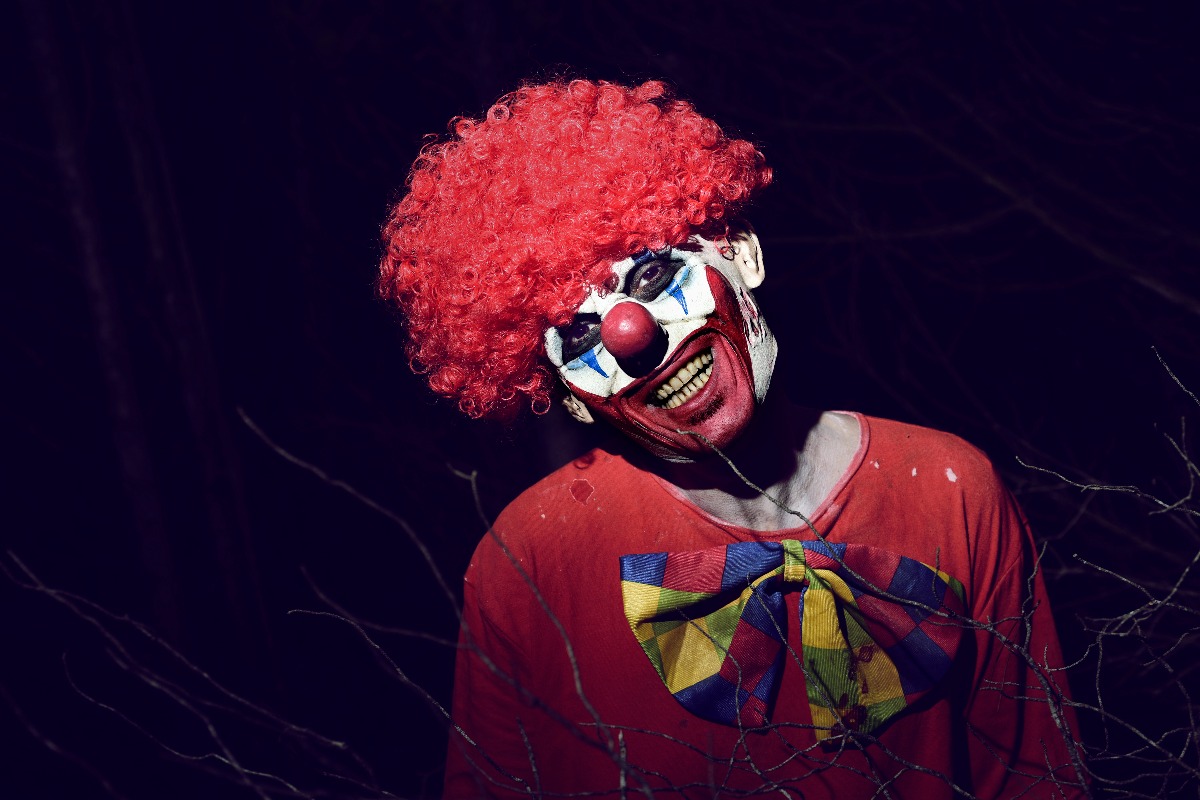 Clowns are weird, sometimes fun and but, most of all, they are scary. Originally culturally conceived as hilarious and carefree, at some point in the cultural zeitgeist, they morphed into something a lot more creepy and unsettling.

Of course, this wasn’t helped by horror classics depicting clowns as either murderous aliens or murderous humans or well, just murderous actually.

No one wants to see a man in bright red and white makeup holding a balloon in one hand and a kitchen knife in the other; not in a dark hallway, empty forest, or abandoned farmhouse. Fortunately, if you’re someone who loves a good scare behind the safety of a TV screen, there are a plethora of scary clown movies to tickle your scary bone.

And we’re not just looking at theatrical releases, either. This list covers documentaries and films with clown characters as well, to make sure that you’re exposed to all the best horrifying clown content around.

Let’s take a look at some of the best and scariest clown movies around.

No list of clown movies is complete without It, the absolute classic subterranean clown horror story. The movie was adapted from a 1986 novel of the same name written by horror legend Stephen King.

It’s a coming-of-age story about a group of kids who are terrorized by a mysterious white-and-red-faced being who lives in the sewers. While the imagery alone is enough to make you keep the lights on at night, it’s propped up by a spooky story about children in the town being terrorized by the being for centuries.

One of the highlights is a trip to a derelict haunted house that houses some especially scary imagery. Bill Skarsgård plays an exceptionally creepy Pennywise, and there’s a palpable heaviness to the proceedings that really give it some pop. He also can weirdly dance in a very scary yet memorable way. Keep an eye out for that.

Also worth checking out is the 1990 mini-series by the same name with Tim Curry taking up the mantle of Pennywise, but obviously, there’s no comparing to the original novel for real scare value.

Sure this isn’t a clown movie through and through, but it has such a creepy clown scene that it pretty much had to be included on this list. Director Steven Spielberg actually constructed a robotic evil clown doll for the film and it almost worked too well.

After the famous scene young actor Oliver Robins, played by Robbie Freeling in the movie, complained that he couldn’t breathe. Spielberg thought the young boy was improvising but realized something was wrong when the boy turned purple.

That’s right, the mechanical demon clown almost killed Robbie in real life. This would have been extra tragic considering that the movie already has a terrible amount of real death associated with it.

This amazing cult classic is one of those hybrid comedy/horror movies that hits all the right (and a lot of the wrong) notes. Yes, it’s campy and no one’s winning any awards in the acting department, but once you get past all that, there’s a pretty good horror premise under the hood.

The alien “Klowns” arrive at a small town and start putting people in cotton candy cocoons to drain the life out of them. The clowns are vicious and inviting all at once, a contradiction that makes the movie all that weirder.

While it’s not necessarily jump-out-of-your-seat scary, there are many of us out there who saw this as kids and had trouble sleeping with the light off afterward. It didn’t do great in its original theatrical run but it became a phenomenon when it went to video. Everyone should see it at least once.

Conversations with a Killer: The John Wayne Gacy Tapes

This is maybe the scariest of all clown stories because it’s real. Notorious serial killer John Wayne Gacy is suspected of having killed 33 boys and young men — the actual number is probably higher but remains a mystery to this day.

Gacy’s known as the Killer Clown because he was an actual children’s clown before anyone figured out he was actually a serial killer. This documentary contains real archival recordings of interviews after he was incarcerated.

One of the reasons Gacy was able to get away with his crimes for so long is he targeted vulnerable teen boys from poor households — targets he knew wouldn’t be a high priority for the police. He hid many of the bodies of his victims in his home.

If that’s not scary I don’t know what is.

This lesser-known gem has one of the more unsettling clown stories on this list. It’s based on a short film with the same title and it centers around a father who discovers a clown suit and decides to wear it for his son’s birthday party.

Unfortunately, the costume is cursed. The dad soon finds out the hard way when he can’t get the nose off of the suit and he finds himself stuck in it. Things go from bad to worse and exceptionally gorier as the story goes on, with a plot that involves dismemberment, cannibalism, and good ol’ family values.

While it’s a little tropey, the film is definitely worth a watch — especially if you want some gory clown action.

Definitely one of the cooler titles on the list, House of 1000 Corpses was directed by Rob Zombie, the musician who loves occult and esoteric car references, somehow combining those two things into a pretty excellent song.

While not completely an evil clown-centric movie, it does include the murderous clown legend Captain Spaulding. He’s appeared in a number of different movies like The Devil’s Rejects and 3 From Hell, but he really cuts his teeth here.

In the movie, he owns a gas station that sells fried chicken, next to a roadside haunted house. It was inspired by horror classics like The Texas Chainsaw Massacre and The Hills Have Eyes, so you know there’s going to be all the gore one person could ever want.

The plot for Stitches is fairly straightforward, but who needs a plot when you have scary clown murder? Stitches is the story of a birthday clown named Richard Grindle who’s killed at a children’s party after the kids make fun of him and tie his shoelaces together.

However, he’s part of a cult that resurrects him and when he comes back he goes after all the kids involved many years later. There are some incredibly juicy, gory revenge murder parts to this one; the death scenes in particular are inventive and inspired, definitely worth watching for their entertainment content alone.

Since its release in 2012, the movie’s become something of a cult classic and continues to delight and trouble audiences regularly.

This 1989 cult classic takes place right before Halloween. Three young boys are in an empty house and at the mercy of three escaped mental patients. The men murder three clowns and assume their identities.

Clownhouse was nominated for the Grand Jury Prive in the dramatic category at the 1989 Sundance Film Festival.

The movie was not without controversy, and it would probably have been more popular at the time, but director Victor Salva was convicted of sexually abusing one of the young stars.

Worried about the lack of diversity in the horror clown world? Killjoy scratches that itch, billing itself as “new urban horror.” A nerdy kid named Michael is beaten up and brings a clown doll to life in a ceremony to enact his revenge.

The clown goes on a killing spree for revenge, but also just because that’s what killer clowns seem to do. There’s no sugar coating — this is a low-budget movie that went straight to DVD, but it has no qualms about what it is and what it’s trying to do.

If you’re looking to watch a clown go crazy in an urban setting then this one’s for you. There are also a number of sequels to make sure the fun and horror never stop.

Sometimes all you need is a title to let you know what a movie is about. S.I.C.K. is an extremely low-budget horror film involving yet another killer clown.

The beauty of some clown horror movies is the low budget. There are a lot of people out there who love low-budget horror films, and this is one of the finest. The plot is about as straightforward as you can get with a horror movie — three people vacation in a cabin in the middle of nowhere and unfortunately there’s a killer clown on the loose to stalk them.

If you view it for what it is, you’re going to have a good time. If you want a movie with great special effects, quick action, good audio, and competent cinematography then you’re going to be upset. Definitely worth checking out — if you can track down a copy (don’t worry it’s on YouTube).