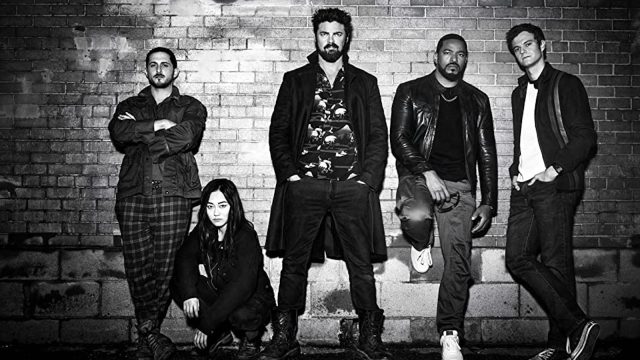 The Boys showrunner Eric Kripke is teasing the introduction of actor Jeffrey Dean Morgan in the upcoming season four with the first behind-the-scenes image.

“Welcome to the fam, @JDMorgan. We’re all SO PSYCHED to have you!! (This pic is from #Season4, now shooting)” Kripke captioned the photo in a Twitter post. The image features various actors from the show — including Jack Quaid, Laz Alonso, Tomer Capone, and Karen Fukuhara — flipping off the camera while Karl Urban is uncharacteristically refraining from engaging in the lude gesture, instead pointing with his index finger.

Anthony Starr, who plays everyone’s favorite breastmilk-obsessed antihero Homelander in the show, even commented on the pic, writing, “Great news!”

The news broke about Morgan’s involvement in The Boys earlier Thursday, but it was arguably a long time coming. Both Kripke and Morgan, who previously worked together on the show Supernatural, had long expressed interest in such a collaboration taking place.

Though Morgan’s role is still not known, it represents the actor once again helming a character based on a comic book. Morgan has carved something of a niche for himself in that sense, particularly for playing morally dubious characters. Perhaps most famously, Morgan played the dastardly superhero known as The Comedian in Zack Snyder’s 2009 film, Watchmen, based on Alan Moore’s graphic novel of the same name that arguably paved the way for a series like The Boys to thrive, as it similarly focuses on an angle of superheroes that examines what their real-world consequences for existing would be. Morgan also played Thomas Wayne in a flashback scene for Snyder’s Batman v Superman: Dawn of Justice.

Morgan’s most notable role these days is as a main character in The Walking Dead — also based on a comic book — as Negan, the character who was once the show’s main villain but has since gone through something of a redemption arc in recent seasons.