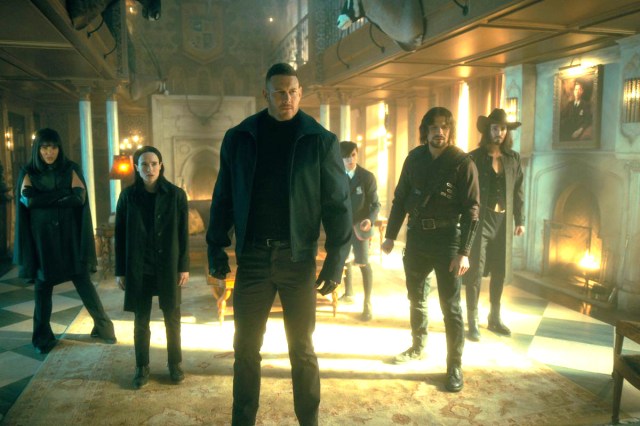 While the third season of the popular Netflix superhero family show The Umbrella Academy just premiered a few days ago, showrunner Steve Blackman is already thinking about the next season.

Blackman took some time out of his busy press schedule to talk to Collider about the future of the show and what that might look like.

I have a pretty good idea of Season 4. If we’re lucky enough to be picked up, I know where we’re going. Clearly, there will be a challenge for our Umbrellas to deal with a world where they have no powers. I think it’s safe to say they’ll figure out a way to get them back. But Allison is not in a different timeline, she’s in the same timeline. In fact, Ray and Claire do exist in this timeline now. That was the dark deal she made with Hargreeves, to help Hargreeves bring the family together.

The decision of course had consequences and there would be a lot to work out in a subsequent season.

This is what she got. She got a man who existed in the 1963 timeline, Claire existed in a different timeline, [and] they are now merged into this timeline. So she got the best of both worlds, but it had a price which is to screw her whole family.

Blackman also said that he has a pretty good plan moving forward for how he wants to handle the storyline, and that he’s consulted with comic book creators Gerard Way and Gabriel Bá about it, according to Newsweek.

We’ve deviated from the graphic novel to some degree, probably more this year than other years. You know, I love what Gerard and Gabriel do with “Hotel Oblivion.” Some of it was hard to sort of translate financially, as well as sort of how we would turn it into storylines, but I do have a very, very good idea of what I want to do next season.

Ultimately he said he would love to get to at least seven seasons. “I’m not sure how many more seasons we have, but I do have a Season 4 that I think the fans will love and, you know, a great ending, if it is to be our last season,” he said.

David Castañeda, who plays Diego on the show, told People that there’s so much to explore in another season, including what would happen to the group if they all lose their powers.

I honestly really do like the fact that we don’t have powers because The Umbrella Academy was never really about the powers. The power was just a little seasoning to [the show], [this season] has de-escalated and it’s become much more about, ‘Let’s just watch these people that we really love bantering with each other.’

Season 3 of The Umbrella Academy is currently streaming on Netflix.