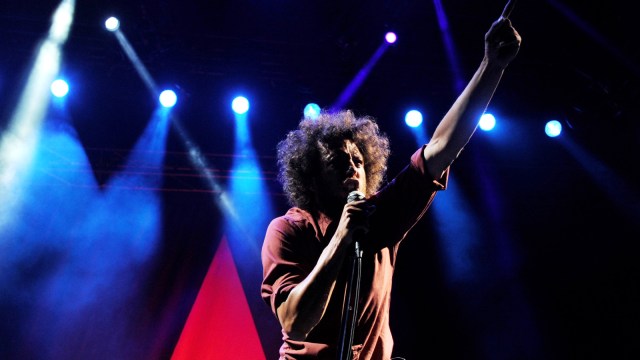 The 1992 Rage Against the Machine song “Killing in the Name” was inspired by police brutality and the Los Angeles riots from that same year, but over the past 30 years has become something of a catchall protest anthem. Case in point, two DJs at the Vancouver soft rock radio station Kiss Radio 104.9 FM have been playing the song since Wednesday morning, after the station owner allegedly laid off the entire staff to clear way for a new format.

Again, that’s alleged — because no one knew what was really going on for sure, and it hasn’t been ruled out that it wasn’t a stunt. But then again, if playing “Killing in the Name” on a loop for about 24 hours isn’t a protest even if it’s also a stunt, then we don’t know what is.

Freelance journalist Tracey Lindeman, who also penned a piece for The Guardian about the protest stunt, has been doing the lord’s work by documenting the phenomenon on Twitter since Wednesday afternoon.

“A soft-rock station in Vancouver has been playing “Killing In the Name Of” by Rage Against the Machine for hours on a loop,” Lindeman tweeted Wednesday, at the start of what would become a length Twitter thread. “Whenever someone calls in for a request, they deny it and replay the Rage song again.”

Lindeman continued, writing that she initially listed to the song “no fewer than eight times” while call-in listeners alternatively encouraged the DJ or pleaded with them to play literally anything else

When Lindeman herself called into the station, the DJs played coy and the subject of abortion was appropriately brought up. (The song also feels relevant in the United States, in particular, in light of recent events.) Shockingly, the DJs are indeed pro-choice.

The DJ also refused to comment on whether it was a stunt or a protest, nor provide his real name. “I’m not allowed to say. I’m just a guy in a booth, just letting the Rage play over and over,” said the DJ, who Lindeman says asked to be referred to as “Apollo” after the character in the Rocky films. “What do you think? Do you like it?” he asked.

For hours, the DJs had a blast with call-in listeners, as Lindeman and others documented.

Unfortunately, during the time of this writing, the loop finally ended, as it appears it was indeed a stunt to signal a format change.

But we don’t need to be sad because it’s over — instead, be happy that it happened in the first place. Look no further than the dozens of delighted tweets from those who caught the on-air protest-slash-format change to that effect.

Ex-Kiss Radio 104.9 FM hosts Kevin Lim and Sonia Sidhu allegedly penned a Facebook post the day before, indicating that they had been fired — though it’s still unclear if they had anything to do with the stunt.

“Our five years on KiSS RADiO has come to an end. KiSS is changing, and unfortunately, we were informed that we won’t be part of this new chapter,” the pair wrote. “Although this comes with mixed emotions, we want to express one overwhelming feeling: gratitude.”

Anyone who caught the song is likewise feeling some gratitude today — we wish them the best in their future endeavors.