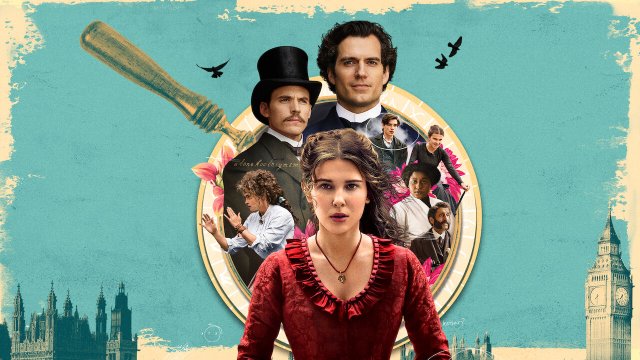 Netflix has announced that production on its much-anticipated Enola Holmes sequel has wrapped filming, with the news joined by a fresh behind-the-scenes clip. Fall 2020 saw the Sherlock Holmes reimagining, which stars Stranger Things‘ Millie Bobby Brown as the Great Detective’s intrepid younger sister, become one of the streaming platform’s most popular movies ever. So the hype is high for this next adventure for the Holmes clan.

“The sequel to Enola Holmes has officially finished filming!” shared the Netflix Twitter account this Friday morning. “Until it premieres, enjoy this first clue to Enola’s next great adventure.” The clue in question is extremely spoiler-free as the accompanying video captures the moment when Louis Partridge, who plays Enola’s love interest, the young Lord Tewkesbury, wrapped work on the film, sharing a dance with Brown in the process.

With the first film loosely adapting the opening novel in the young adult book series from Nancy Springer, The Case of the Missing Marquess, we can presumably expect the sequel to tackle book two, The Case of the Left-Handed Lady. There’s plenty more material for future movies after this one, too, as Springer has written five further books to date, with the most recent — The Case of the Black Barouche — publishing last year.

Though only Brown and Partridge are highlighted in this clip, we know that Henry Cavill is also back as Enola’s famous older brother, Sherlock, for EH2. Helena Bonham Carter is likewise returning as the family matriarch, Eudoria. Harry Bradbeer will direct once again. With production having only just concluded, it’s too early for a release date to be revealed just yet. However, we can maybe expect it to hit Netflix sometime later in 2022.

While we wait for Enola Holmes 2 to get here, Millie Bobby Brown will next be seen in Stranger Things season 4, due in the summer.