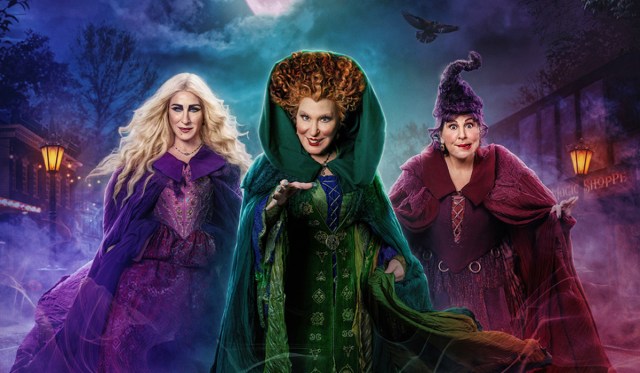 It’s been 29 years, two months, and seven days — right down to the day, and the witches are almost back, so there’ll be hell to pay. That’s right, in just a few spooky sleeps, Hocus Pocus 2 makes it’s long-awaited debut to an audience of adoring fans worldwide.

So as we practice our best witchy spells and summon spirits with song, Bette Midler is opening our eyes to a lyric we’ve aparently been singing wrong for almost 30 years! We can just hear Winnifred asking herself, “Why was I cursed with such idiot followers?”

In an Instagram post to celebrate the Sanderson sisters coming home again, Midler shared a character poster of her as Winifred and she used the following caption:

Yep, you read that right, she says “Hello SAILORS,” not ”Hello Salem,” and we’re as shocked as all of you. For years, whenever we listen to I Put A Spell On You, we’ve started by boasting our Hocus Pocus knowledge and adding the Winifred intro to the song. To find out we’ve been doing it wrong makes us feel about as brilliant as Ice and Jay throughout the film.

The only saving grace we feel is that we’re not the only ones. Fans in the comments section are shocked or accusing the head witch in charge of falling victim to one of the age-old horrors of the 21st century: a dreaded typo!

Could it be that Winifred said “Salem” in Hocus Pocus and it’ll be “sailors” in Hocus Pocus 2? That’s another theory floating around like the Sandersons on their brooms. Whatever the case may be, you don’t question Winifred, you bow down to her instead. That’s right, Sistahs, let your capes flow and your spells be enchanted, and work sailors into your witchy vocabulary; we just might need to get used to the new rendition!

You can watch Hocus Pocus and examine the lyrics for yourself while you wait for the highly anticipated debut of Hocus Pocus 2 coming to Disney Plus this weekend. Here’s to witches and haunts, spooks and scares, and the magic of Halloween.