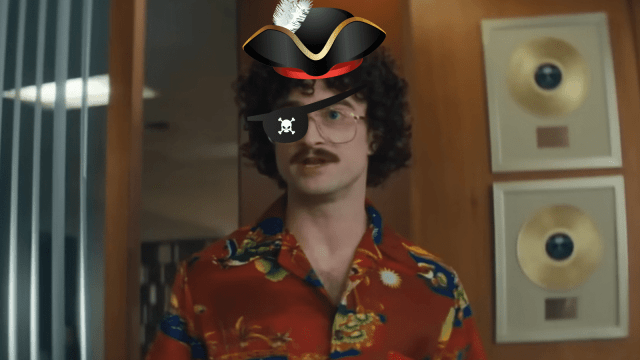 Weird: The Al Yankovic Story is now available to stream on the Roku Channel, and it is getting heaped with acclaim for audiences and critics, so it is naturally garnering a lot of interest.

The trouble is, The Roku Channel isn’t exactly available worldwide, so international fans have been wondering how they can get their hands on the movie without resorting to illegal measures.

Well,  the subject of the biopic himself, Weird Al Yankovic, issued a response to an Australian looking for answers to this exact question.

Yankovic appears to make mention of using a VPN to access the film, before clarifying that his intended abbreviation for VPN is ‘Very Probably No.’

The parody musician also acknowledges that fans eager to see the film likely have a torrent of questions about accessing it, however, Yankovic capitalized the word torrent. Perhaps he slipped on his caps lock key because surely he wouldn’t condone peer-to-peer sharing of his film?

In any case, Weird Al’s tongue-in-cheek response to the inquiry should hopefully light a fire under Roku’s butt to make the film available to international audiences, before they resort to doing what Yankovic absolutely didn’t suggest.

At the time of writing, Weird: The Al Yankovic Story is sitting at a critic score of 85 percent on Rotten Tomatoes, and has the coveted ‘certified fresh’ badge to its name.

Our review shared a similar sentiment, praising it for staying true to its absurd premise right up until the credits roll.