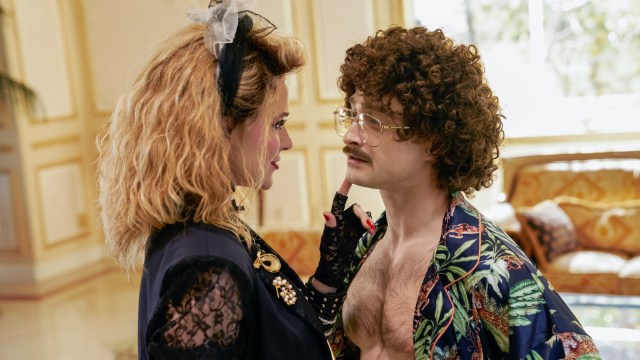 The Roku Channel
Review of: Weird

When news initially broke that The Roku Channel had picked up a Weird Al" biopic starring Daniel Radcliffe, people naturally scratched their heads. Now, it seems clear that everyone involved in the making of the film just wanted full creative control to make a fun, dumb movie, which the fledging streaming platform could more than deliver. The film is also a love letter, of sorts, to the real Yankovic, with Radcliffe lip-sync performing several of his early songs throughout the film.

Music biopic parodies and mockumentaries are hardly a new genre, which have become popular over the years thanks to films from This Is Spinal Tap to Walk Hard: The Dewey Cox Story. Typically, these parodies involve tortured artists who find commercial success, only to fly too close to the sun and come crashing back to earth — whether it be due to sex, drugs, and rock and roll, infighting with bandmates, or a combination thereof.

However, we can promise you that Weird: The Al Yankovic Story, which premieres on The Roku Channel this Friday, is the only music biopic parody you’ll ever see that features Madonna becoming the kingpin of a Colombian drug cartel after taking out Pablo Escobar.

Very loosely based on the not-real life of “Weird Al” Yankovic, Weird: The Al Yankovic Story was born as a 2010 Funny or Die fake trailer (which likewise produced the film) starring Aaron Paul as a gritty version of the titular parodist, with Gary Cole and Mary Steenburgen playing his disapproving parents. Here, in the hands of seasoned comedy writer Eric Appel making his feature directorial debut, this fake world is expanded to tell the story of the early life of the comedy songwriter, to his auspicious rise to fame and all of the trappings that came with it.

The film kicks off right in the action, with a flash-forward showing Yankovic flatlining on a stretcher, only to awaken with a gasp. But momentarily, the story goes back to where it began, with a young Alfred Yankovic doing his best a suppress his dreams of putting his own lyrics to other people’s songs. When his father (Toby Huss, The Adventures of Pete & Pete) hears him do a childlike parody of “Amazing Grace” (“amazing grapes,” natch), he tells him that what he’s doing is “confusing and evil” and that he should come work at the factory and learn to be a man.

Although his mother (Julianne Nicholson) initially discourages Al, telling him that he should “stop being who [he is] and doing thing [he] loves,” she eventually breaks down and buys him his first accordion with money she had squirreled away in a tin.

Yet, Al was not destined for factory life — one of the running jokes in the film is that no one knows what the factory actually makes — and when he comes of age, his parents kick him out of the house. The adult Yankovic (portrayed by an absolutely ripped Daniel Radcliffe) moves in with a trio of roommates who help inspire his first parody cover, “My Bologna,” set to “My Sharona” by the Knack.

Although the song quickly gains airplay, Al is initially rejected by the head of a record label (an extended cameo by the real Yankovic, reprising his role from the fake trailer) and thoroughly roasted by his assistant (Will Forte) — much to the hilarious chagrin of the real Yankovic, who momentarily gets snapped out of character by the barbs.

It’s only while playing at a seedy club that Al meets Dr. Demento (Rainn Wilson), who helps mold him into an overnight sensation, launching his career as a music parodist into the stratosphere. And that is coincidentally also about the point in the film where the similarities between the real and fictional Yankovic’s life come to an end.

The hook here, of course, is that the real-life “Weird Al” Yankovic has about as nice and wholesome a reputation as one can possibly have in the music industry. Unlike Radcliff’s Weird Al, who swigs whiskey straight from the bottle, has a torrid, tumultuous affair with Madonna (Evan Rachel Wood), gets himself arrested, and kills an astounding number of people — not necessarily in that order — the real Yankovic is a happily married husband and father who abstains from alcohol, drugs, profanity, and eating meat.

At one point, after reconciling with his bandmates near the end of the film, that point is driven home. “Name me one creative genius who doesn’t have a checkered past with drugs, alcohol, and a murderous rampage through the jungle,” one of his bandmates tongue-in-cheek tells him. The real Weird Al, on the other hand, is about as squeaky clean as they come.

But aside from everything else, it’s hard to understate how much damn fun everyone is having in this movie, which features a murderer’s row of comedic talent.

Without spoiling all of the cameos (speaking of Spinal Tap…), some of the more notable faces that pop up include Quinta Brunson as Oprah Winfrey, Conan O’Brien as Andy Warhol, Paul F. Tompkins as Gallagher (“So that’s Demento’s new protege? I hear they don’t even hand out raincoats and tarps at his shows”), and Thomas Lennon, in the role he was absolutely born to play, as an accordion salesman.

Notably, Michael Jackson, who inspired two of Yankovic’s biggest hits, is nowhere to be found in the film, for reasons that are probably apparent — although “Eat It” is featured in an LSD-inspired side-plot in which Weird Al decides he wants to write his own songs and lyrics. But while Jackson is mentioned throughout the second half of the film, we never meet him as a character.

When news initially broke that The Roku Channel had picked up a Weird Al biopic starring Daniel Radcliffe, people naturally scratched their heads. Now, it seems clear that everyone involved in the making of the film just wanted full creative control to make a fun, dumb movie, which the fledging streaming platform could more than deliver. The film is also a love letter, of sorts, to the real Yankovic, with Radcliffe lip-sync performing several of his early songs throughout the film.

Naturally, Weird: The Al Yankovic Story stays true to its absurd premise, right until the end, which finishes with a literal bang. When the credits roll, childhood photos of the real Yankovic provide some sweet nostalgia to counterbalance the nearly two hours of insanity that transpired before … until you realize that it’s more of the same, followed by an absolutely bonkers, albeit brief, mid-credits scene. Just like the man himself, nothing is what it seems.

When news initially broke that The Roku Channel had picked up a Weird Al" biopic starring Daniel Radcliffe, people naturally scratched their heads. Now, it seems clear that everyone involved in the making of the film just wanted full creative control to make a fun, dumb movie, which the fledging streaming platform could more than deliver. The film is also a love letter, of sorts, to the real Yankovic, with Radcliffe lip-sync performing several of his early songs throughout the film.