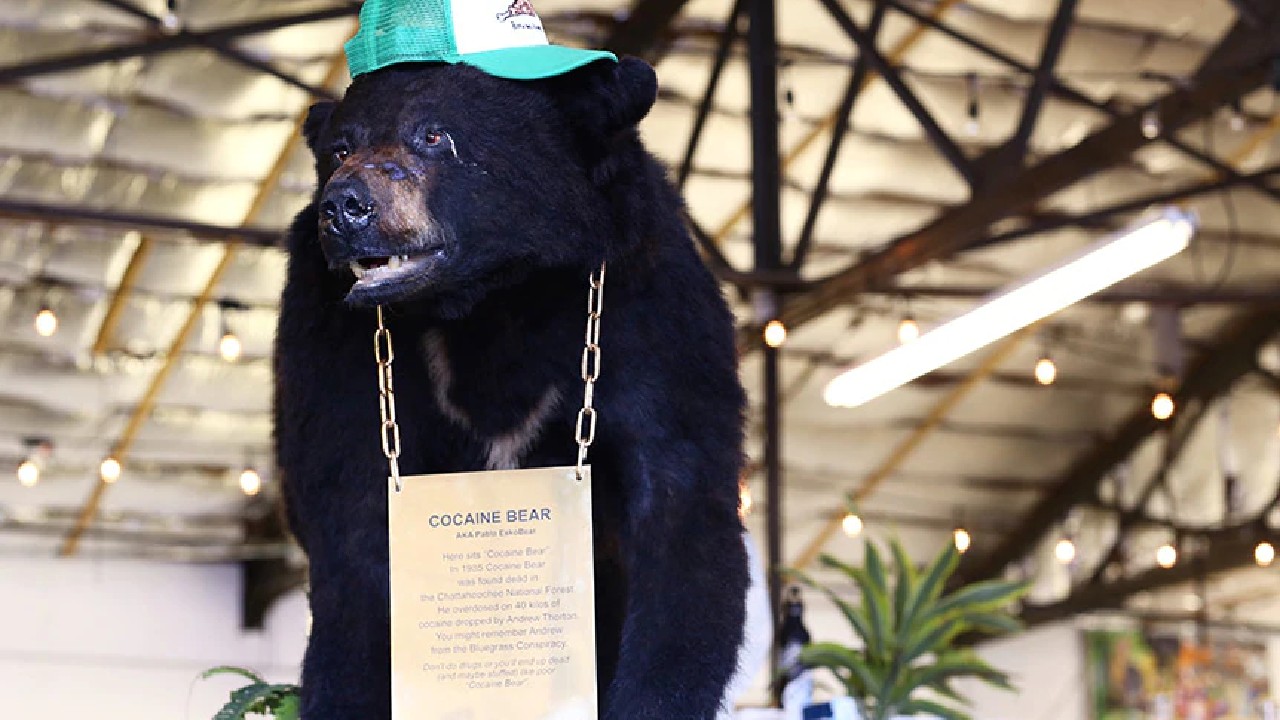 Image via Kentucky for Kentucky.

Cocaine Bear, from director Elizabeth Banks, is an upcoming thriller-comedy film about a bear on a drug binge that is touted as “based on a true story,” but what is the true-crime tale behind the upcoming movie?

Arguably, there’s as much myth surrounding the incident as truth, and given the fact that the film’s producers include Phil Lord and Christopher Miller — the directors behind the wonderfully meta-comedy, 21 Jump Street — we’re guessing the movie will lean into more of the fantastical elements.

Unsurprisingly, Miller and Lord have described the film as “insane” and “a lot of fun,” indicating that it will more than likely play up the premise for comedic effect.

It’s a matter of public record at this point that a black bear in the Chattahoochee National Forest in north Georgia did indeed consume cocaine when it stumbled upon a duffle bag full of 75 pounds of the 95-percent-pure white powder in 1985. What is not as clear is just how much of the stuff the bear actually ate.

According to Slate the bear, which only weighed 175 pounds, died within 20 minutes of eating the nose candy. A hunter came upon the then-dead bear, who later told a friend about it.

Despite the movie adaptation being described as showing the bear’s “coke-fueled rampage” for blood and more booger sugar, there doesn’t appear to be any evidence the ursine animal actually interacted with people while it was high on the stuff. At least not that we know of.

After the hunter’s tale spread via word-of-mouth, the Georgia Bureau of Investigation got involved and discovered the creature’s body on Dec. 20, 1985. At some point between the initial discovery by the hunter and GBI’s arrival, all of the remaining cocaine from the nearby duffle bag disappeared.

This is where it has since become difficult to separate fact from fiction since a store in Kentucky Fun Mall, called Kentucky for Kentucky, made a blog post claiming they spoke with a retired medical examiner who told them the bear’s stomach was “literally packed to the brim with cocaine.”

This claim has apparently led some people to conclude the bear did, in fact, consume the entire 75 pounds worth of coke from the duffle bag, as was cited in a CinemaBlend article, for example.

The truth is, the Kentucky for Kentucky article should be taken with a big ol’ grain of salt because it does not name the purported retired medical examiner they interviewed. What’s more, the store has what they claim is the bear on display, in taxidermied form, which serves as a tourist attraction. So it would behoove them to spin a legendary yarn about the animal, of which they sell themed merch. With all that said, it’s still entirely possible the bear’s stomach was ”packed to the brim” with coke, as the article claims, but it’s very doubtful all 75 pounds of the stuff was consumed by the bear, as there are other on-the-record accounts that contradict that notion.

The Slate article, citing archival newspaper clippings, explained that a GBI agent noted at the time: “The bear obviously didn’t eat 75 pounds of cocaine”. They also cited a second agent who also found the circumstances suspicious since there were a number of residue-free wrappers left in the bag. “Something ain’t right, I’ll tell you that,” the agent told reporters.

According to an Associated Press report from Dec. 1985, Georgia’s chief medical examiner Dr. Kenneth Alonso stated that the autopsy revealed the bear had absorbed only three or four grams of cocaine in its bloodstream. While the examiner did admit the bear may have eaten more than just the three-to-four grams, somewhat lending credence to the Kentucky for Kentucky blog post’s claim, Alonso also stated: “What happened to that duffel bag? […] The bear does not account for the full duffel bag.”

Just whose cocaine was it anyway?

The then-empty duffle bag, and the bear who succumbed to the illicit substance it once contained, were found within 100 yards of three other duffle bags full of cocaine, totaling 218 pounds, in that same forest.

The three additional duffle bags were found shortly after the owner of the drugs was also discovered in a manner that seems straight out of a Coen Brothers movie or an episode of Breaking Bad.

On the morning of Sept. 11, 1985, a man in Knoxville, Tennessee found a dead man sprawled out in his driveway, on top of his undeployed parachute, with no visible injuries to him other than dried blood that had trickled down from each nostril. The deceased person, who had a 77-pound duffle bag of cocaine strapped to his waist, was later identified as Andrew Carter Thornton II, who authorities believed was poised to return to the area to get the cocaine. That plan was botched when his parachute failed after having jumped from a plane that was returning from Columbia.

Fred Myers, the man who discovered Thornton’s body, later recalled he heard a crash around midnight the night before.

When his body was discovered, Thornton was wearing a bulletproof vest and night vision goggles. He also had in his possession two different pistols and ammunition, a stiletto knife, freeze-dried food, six South African gold coins, $4,500 cash, IDs with various names, a Miami Jockey Club membership card, and many inspirational epigrams, one of which read: “There is only one tactical principle not subject to change: it is to inflict the maximum amount of wounds, death, and destruction on the enemy in the minimum amount of time.”

Thornton was a former police officer and Drug Enforcement Administration agent who apparently switched sides midway through his career — literally breaking bad — and faced charges for alleged weapons theft and marijuana smuggling in 1981. According to the Federal Aviation Administration’s account, they believe he jumped from an altitude of 7,000 feet and got his parachute lines tangled with the duffle bags of supplies and cocaine strapped to him.

A plane that crashed in Macon County, North Carolina was discovered that same day, and it matched the key in Thornton’s pocket. The plane had been on autopilot, headed for the Atlantic, before Thornton bailed out over Knoxville. It’s also been speculated that Thornton may have been double-crossing his business partners, though it’s also entirely possible he was merely en route to deliver the drugs to distributors, as planned.

Thornton’s girlfriend, Rebecca Sharp, was charged with conspiracy for allegedly working with her boyfriend to make the deliveries, and even poised to pick him up from Knoxville. The charges were eventually dropped when a judge ruled that she made a confession under duress while speaking with an agent who presented himself as a Colombian cartel representative. The definitive account of the entire affair is covered in Sally Denton’s 1990 book, The Bluegrass Conspiracy.

As for the cocaine bear, he lives on in the afterlife, in taxidermy form, at the Kentucky Fun Mall in Lexington, Kentucky, and was even the star of a viral ad for the shopping center in 2016.

Prior to becoming a tourist attraction at the mall, the stuffed cocaine bear’s owner was country legend Waylon Jennings, according to Kentucky for Kentucky’s website.