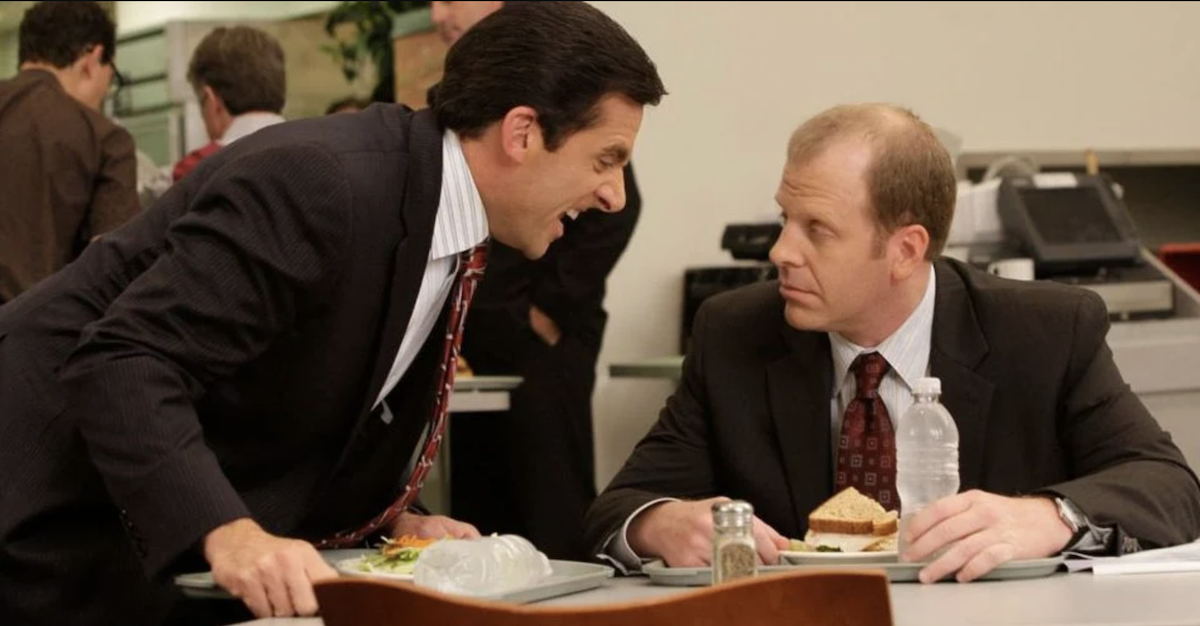 There’s a lot to be said about the toxic relationship dynamics between Michael Scott and Toby Flenderson on The Office. Diehard fans of this hilarious show know very well that Michael was never Toby‘s biggest fan. In fact, Michael spent quite a bit of time showcasing just how much he despised Toby any chance he got.

People who are new to the show might be a little confused about why Michael hates Toby so much, since Toby is such a gentle and sweet-spirited fellow. He comes to work, puts his nose down, and tries not to cause a stir. Here’s what you should know if you’re curious to know about the ongoing (and completely one-sided) feud between Michael and Toby on The Office.

Why does Michael hate Toby so much on The Office?

The short and simple answer for why Michael despises Toby so much is the fact that Toby works for HR. In other words, he’s a corporate-level employee who sits in the back of the office to keep an eye on things. Michael isn’t too happy with corporate employees in general, since he feels they constantly block him from having fun, telling crude jokes, and running his office in an edgier way. Michael gets in trouble for forwarding inappropriate emails, mimicking racially insensitive comedy bits, and spanking an employee (whom he’s also related to) as a form of corporal punishment.

Every time something like this happens, Toby is there to try to steer Michael in the right direction and get him back on track in terms of being an appropriate boss in the workplace. At various times, Michael has referred to Toby as “the worst human being ever” amongst other cruel titles. He also labeled Toby an “evil snail,” a “convicted rapist,” and more. Michael’s nicknames for Toby are beyond mean. Being told he has to follow rules in the workplace makes Michael feel trapped in a box. For this reason alone, Michael‘s frustration with Toby constantly brews inside him. According to Michael, his job is to “make the office fun, while [Toby‘s] job is to make the office lame.”

Does Toby hate Michael back?

From a viewer’s perspective, it doesn’t seem Toby ever had any ill will towards Michael. Even though Michael constantly bullies him and treats him like trash, Toby remains objective and calm through everything. One incident that totally proves Toby doesn’t truly hate Michael is the time he offered to provide Michael with therapy-style counseling after the corporal punishment incident.

If Toby really wanted to get rid of Michael permanently, he had plenty of opportunities to get Michael fired. Instead of pushing the agenda of Michael being an unfit boss, Toby never said anything at all or reported anything serious to the corporate offices in New York City. This leads viewers to believe the hatred was not mutual. Michael definitely hated Toby, but Toby didn’t hate Michael back.

What are the worst things Michael has done to Toby?

One of the worst, yet hilarious things, Michael did to Toby was throwing him a “fabulous” going away party. Michael was more excited than anyone else in the office to learn that Toby was planning to move to Costa Rica. He hosted a bash in the office parking lot filled with delicious foods, carnival rides, balloons, and a giant karaoke machine. Michael hit the stage to perform an edited rendition of Supertramp‘s “Goodbye Stranger.” He changed the words to “Goodbye Toby” and happily let the world know he was more than ready for Toby’s departure. Michael also took the chance to announce to everyone it was the best day of his life seeing Toby leaving the office.

In that same episode, Michael gifted Toby a rock in a box with a label that said “Suck on this.” Michael’s original intention was to give Toby the gift in private, but to his dismay, Holly and Pam were both witnesses to the horrible moment of bullying. Michael had to try and pretend he wasn’t behind the cruel joke and per Pam’s suggestion, he ended up handing over his nice watch to Toby as a replacement present. When Michael later found out from Jim Halpert that Toby was back at the office a few episodes later, he completely lost his cool.

The new HR directory, Holly, got sent back to Nashua after David Wallace discovered her relationship with Michael, and it opened up the door for Toby’s return to HR. Fans of The Office will never forget Michael‘s response to the news when his jaw dropped and he repeatedly screamed the words, “NO! GOD, NO!” In an attempt to get Toby fired (and possibly arrested), Michael realized the smartest idea he could come up with would be to plant marijuana inside Toby’s desk. Michael purchased fake weed from some of the men working in the warehouse and after planting it inside Toby’s desk, he called the cops. Fortunately, the cops immediately knew there was nothing more than salad inside Toby‘s desk, so he didn’t end up getting in any trouble.

When Michael found out about a financial surplus in the office, everyone began arguing about whether they should get new chairs or a new copier. Toby chimed into the conversation suggesting the money be spent on an asbestos screening in the office since asbestos is a silent killer. Michael responded by telling Toby he was actually the “silent killer.” Obviously, Toby walked right into that joke, but it still stands as further proof that Michael really despised Toby and all of his ideas. When Michael was discussing the casino night fundraiser with the office and wondering if children should be added to the guest list, Toby shut that idea down really quickly.

He reminded Michael that there would be alcohol, gambling, and food catered by none other than Hooters on the premises. For these reasons and more, Toby didn’t feel it would be appropriate for kids to be present. Michael responded by asking Toby, “Why are you the way that you are? I hate so much about what you choose to be.” This moment perfectly encapsulates the truly toxic dynamic between Michael and Toby. When describing Toby to the cameras in a one-on-one moment, Michael utilized the moment to bash Toby‘s marital situation also. He said, “Toby is in HR, which technically means he works for corporate, so he’s really not part of our family. Also, he’s divorced, so he’s really not part of his family.” This isn’t the first time Michael mentioned Toby’s divorce either.

He let Amy Adams’s “hot girl” character know Toby was divorced in season one as a way of making her lose interest. in the episode when Michael was being forced to give a deposition for Jan’s legal case against Dunder Mifflin for wrongful termination, he sat next to Toby during their lunch break. In an effort to make Michael feel better, Toby began describing a traumatic memory he had from court when he had to choose between his parents during their divorce. Instead of listening to Toby open up about his painful past experience, Michael simply pushed Toby’s tray of food onto the floor. It was cruel, but hilarious for viewers at home to see.

In season six Michael interrupts Toby’s meeting to let everyone know that if he had a gun loaded with two bullets, he’d choose to shoot Toby twice, rather than Hitler or Bin Laden. If this doesn’t reveal just how much Michael despises Toby, what else does? Another moment that might solidify the fact that Michael truly always hated Toby is when everyone in the office traveled to Niagara Falls to celebrate the wedding of Jim and Pam.

Instead of sharing a hotel room with Toby, Michael ended up spending the night in the hallways of the hotel by himself. Toby offered up one of the twin beds in his hotel room, and Michael simply couldn’t stomach the idea of spending the night anywhere near Toby. Michael was quick to remind Toby that he should get used to sleeping alone since it’s something he would likely be doing for the rest of his life. It was extremely mean, but Michael got what he deserved for the rude comment when he was stuck homeless in the hotel for the weekend.

Do Michael and Toby ever end up on good terms?

A genuine friendship between Michael and Toby never came into play throughout all nine seasons of The Office. Michael couldn’t stomach the idea of being friends with someone so dull, awkward, and boring. He also didn’t like the idea of having Toby in the office since Toby was always doing his best to stick to corporate rules. From Toby‘s perspective, he and Michael could have probably developed a friendship had Michael ever started acting a little nicer towards him. Michael left The Office with Jim, Dwight Schrute, and plenty of other people as his friends, but Toby definitely was not one of them.