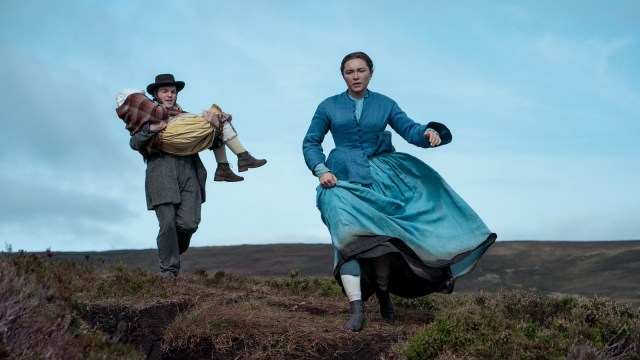 Image via Netflix
Review of: LFF Review: 'The Wonder' is a windswept fable of female empowerment which demands audiences invest

'The Wonder' is a windswept period piece headlined by Florence Pugh on formidable form. Surrounded by an exceptional company of ensemble players in Toby Jones and Ciaran Hinds amongst others, this is a film worthy of emotional investment.

Tempestuous, windswept, and allegorical are just a few words which spring to mind when it comes to The Wonder. A faith-driven character piece starring Florence Pugh and directed by Sebastian Lelio (Disobedience), which calls into question the role of power and belief in contemporary society.

Adapted by Alice Birch (Normal People) from Emma Donoghue’s novel, The Wonder debates science versus religion alongside media’s influence on public perception. As Lib Wright, an English nurse paid handsomely to watch Anna O’Donnell (Kila Lord Cassidy), Pugh is nothing short of magnetic on screen. Armed with medical training, but beset on all sides by the blinkered beliefs of an isolated Irish community, the film requires audiences to invest.

Faced with opposition from an overbearing council of so-called experts, including Doctor McBrearty (Toby Jones), Lib is belittled because of her gender, professional station, and adherence to scientific fact. This openness to reason and logic clashes consistently with the locals, as she attempts as ascertain how Anna can survive over four months without food.

Much of The Wonder hinges on chemistry, either between Anna and Lib, or more specifically between Lib and William Byrne (Tom Burke), who represents a journalistic angle in this miraculous fireside fable. Director Lelio also adds to the visual atmospherics throughout by embracing the rugged beauty of this unforgiving landscape.

Alongside the issues of belief which are dealt with, The Wonder also addresses grief in a very profound way by forcing Pugh to dig deep when confronting a mother’s loss through the judicious use of symbolism and ritual. A single pair of knitted booties, a spoonful of sedative, and one bead of blood quell her pain, before she drifts into a revelry banishing her anguish through substances.

These scenes make up for the pedestrian pacing which permeates The Wonder, as days and nights meld together with only minor moments of conversational dialogue. Jones and an underused Ciaran Hinds are given little to do apart from look angry, disapproving or indifference as this story unfolds. Hampered as they are by rigid social structures, which defined gender roles at that time.

Following some dramatic revelations which soon see the health of this miracle child deteriorate, The Wonder then turns its attention to other things. It calls into question the herd mentality of contemporary society, who would rather avoid painful truths and embrace accepted notions than be progressive. On the surface it may seek to celebrate human creation, but beneath this facade lurks a film where forward thinking and cultural advancement are shunned by the fearful.

A world in which some would rather watch people die, then admit that they had made a mistake. A place where petty minded bureaucracy and indoctrinated committees hide in their ignorance, hording power and public opinion to maintain a status quo. Those are the ideas which linger in frame as Lib uncovers Anna’s secret, berates her mother Rosaleen (Elaine Cassidy), and seeks to save this little girl.

In many ways, this feels like a perfect companion piece to Lady Macbeth, also written in part by Birch, that proved to be the breakout role for Pugh back in 2016. In both films, the idea of female subjugation and restrictive gender roles are explored by an actress who effortlessly demands your attention. Having successfully made her way into the mainstream through Marvel, roles in Don’t Worry Darling and Dune: Part Two will only consolidate her appeal and star power.

By mixing and matching small indie projects with broader period pieces and mainstream tentpoles, Pugh is exercising that power creatively to get projects made. Just as George Clooney and Brad Pitt have done through their respective production companies, it is only a matter of time before the actress starts venturing into that arena herself and consolidating her energies.

Surrounded by a solid ensemble of cast iron characters actors, The Wonder tries to address some serious issues beneath the guise of a beguiling period piece. What audiences are ultimately left with equates to a moral fable with female empowerment holding things together. It calls into question matters of identity both semantically and otherwise, but unfortunately gets weighted down by an over-earnest adaptation of the source material.

LFF Review: 'The Wonder' is a windswept fable of female empowerment which demands audiences invest

'The Wonder' is a windswept period piece headlined by Florence Pugh on formidable form. Surrounded by an exceptional company of ensemble players in Toby Jones and Ciaran Hinds amongst others, this is a film worthy of emotional investment.