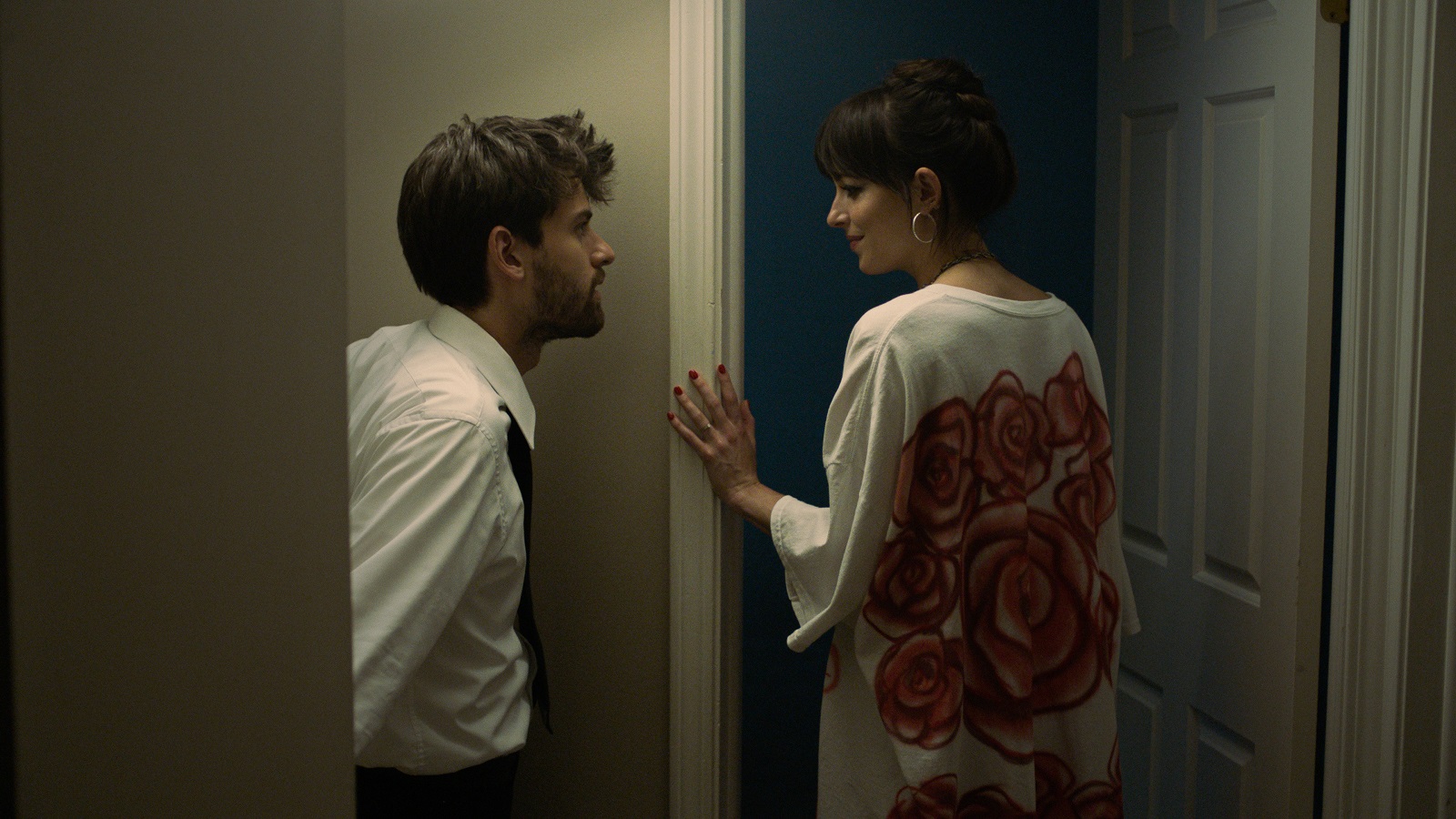 Nobody makes movies like this any more, but they should!

Cha Cha Real Smooth is not only a staggering achievement from Cooper Raiff, who has barely hit the halfway mark in his twenties but also features a career-best performance from Dakota Johnson in a role that only seems simple because she makes it look easy. Written, directed, and starring Raiff as the disarmingly charming Andrew, this Apple original rests squarely on his shoulders.

Just out of college and sharing a bedroom with his brother David (Evan Assante), Andrew floats through life berating stepdad Greg (Brad Garrett), bickering with his mom (Leslie Mann), and hosting bar mitzvahs. Occasionally he seeks solace in the arms of Macy (Odeya Rush), a friend with benefits, who offers him comfort in his apathy. Beyond that, Andrew fills his nights working out ways to leave the country in pursuit of girlfriend Maya (Maya Pedroso Saquel), currently studying overseas.

On paper, Cha Cha Real Smooth should be nothing more than an average twenty-something melodrama with hints of John Hughes. However, this rite of passage character piece is consistently elevated by Cooper Raiff who ensures that it never descends into an angst-ridden navel-gazing exercise by populating his film with savage shots of reality.

Beyond the family unit, which is sketched with uncanny accuracy, Raiff is savvy enough to give Johnson (Domino) layers she can peel back during the course of her performance, layers that allow her the freedom to use silence and eye contact with as much force as any amount of dialogue. Domino might reveal herself as fragile to audiences, but at no point does she relinquish power or control in encounters they share.

When they first meet at the bar mitzvah of a mutual friend, it is all about other people connecting and sharing time together. Children and adults are encouraged onto the dancefloor by Andrew, who bonds with everyone while Domino and Lola (Vanessa Burghardt) sit in a corner. When he naturally encourages them to join the others, there is no hint of flirtation on either side, but instead, it becomes about getting Lola to join in.

That is the genuine beauty of Cha Cha Smooth, as it builds an emotional connection through an organic moment, rather than a convoluted ‘meet cute’ scenario. Johnson is magnetic as Domino, managing to be both beguiling yet equally maternal as a mother to her autistic daughter, bringing an understated tenderness to their scenes together, which Burghardt consistently steals with comic timing and a disarming naturalism.

As affections between Andrew and Domino peak, Raiff makes some smart dramatic choices that intentionally subvert expectations without losing any poignancy. There is no denying the on-screen chemistry between them, while conventional romantic cliches are slightly sidestepped in favor of something with more class. Domino’s fiancée Joseph (Raul Castillo) may feel like a formulaic twist in another film, but in the hands of this director, even he is afforded some dignity.

Even in the latter stages of Cha Cha Real Smooth, when convention dictates a tried and tested path should be taken, it still manages to surprise. There are dramatic revelations and tears shed, but any and all denouements feel earned rather than invented. Within this film, optimism constantly trumps any negativity, even when conversations turn towards teen pregnancy and clinical depression.

In this movie, these are themes offered up to enrich and deepen connections, not weaken or undermine characters in crisis. Cha Cha Real Smooth feels different for a number of reasons, but primarily because Raiff is not afraid to make brave choices. By allowing connections, either romantic or otherwise, to reveal how flawed everyone is beneath the mask they choose to show others.

This is why as the friendship between Domino and Andrew plays out, it does so from a perspective of grounded reality, where these two people recognize that their time together is fleeting. A more perfect personification of romantic love and its temporary nature would be hard to find because normal romantic comedies never work that way.

Cha Cha Real Smooth is perfect because it never set out to be anything close to a rom-com. Raiff focused instead on what it is that brings people together, which has more to do with attraction than anything else in cinema.

Review: 'Cha Cha Real Smooth' is a dramedy which breaks the mold

Nobody makes movies like this any more, but they should!