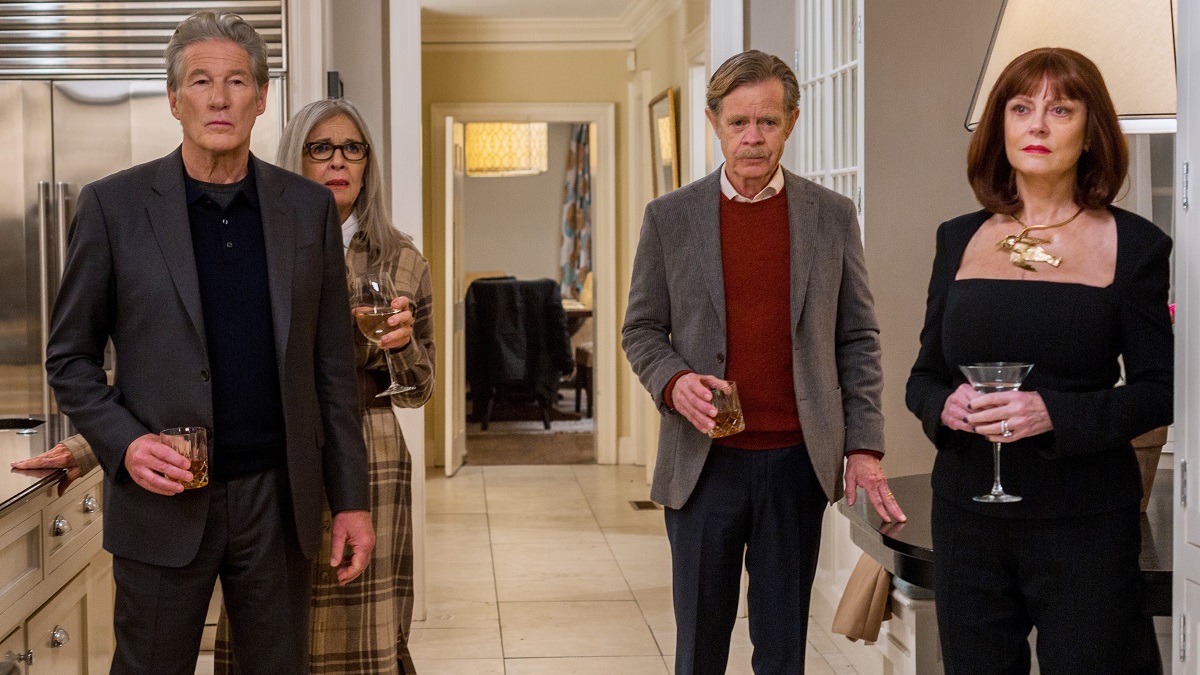 Maybe I Do, which hits selected theaters on Jan. 27, might only feel like a concoction built on relationships, but there is more on offer here for audiences than might be apparent at first glance.

Adapted and directed from his own play into a sharply written piece on the foibles of long-term partnerships, Michael Jacob offers up Maybe I Do featuring Sam (William H. Macy), Monica (Susan Sarandon), Howard (Richard Gere) and Grace (Diane Keaton). Each one is disillusioned with their marriage and seeking solace elsewhere from their respective partners. Where the twist comes, which features prominently in a plot-heavy trailer, is that their children Allen (Luke Bracey) and Michelle (Emma Roberts) are due to marry.

In truth, that might not be the whole twist, but if you throw in that these parents have never met – then a cliché ridden trip into farce seems imminent. Thankfully, with two Oscar winners in Keaton (Annie Hall) and Sarandon (Dead Man Walking), combined with the Oscar-nominated Macy (Fargo) on laconic form – Maybe I Do proves worthwhile.

Much of this incisively scripted dramedy hinges on the always watchable veterans chewing scenery. Whether that refers to Sarandon going full-tilt harpy, or Macy pulling off downtrodden and drily sardonic simultaneously. In the opposite corner, Diane Keaton retains an unerring sense of optimism as Grace, even when she is faced with infidelity from her husband Howard.

All of this plays out in relation to the imminent nuptials of Allen and Michelle, who are embracing their own issues of self-doubt just as their parents are delving into some awkward truths. In all honesty, Maybe I Do might have some interesting things to say about long-term relationships, marital infidelity, and connections in general – but this is low-temperature stuff.

Compared to Closer, directed by Mike Nichols, this never really goes as far as some audiences might like. Instead, it avoids confrontation and recrimination in favor of reconciliation alongside some situational comedy. Although the four leading actors all get their moment to shine, aside from Sarandon, there is minimal scenery chewing and more focus on scripted nuance.

In many respects, Roberts and Bracey get sidelined in favor of their paternal co-stars. On every front, it is immediately obvious how much fun these actors are having. The on-screen chemistry between all concerned is a real pleasure to see, as they each play off one another and the running time flies by accordingly.

For those seeking a comparison, perennial classics including Terms of Endearment or Broadcast News spring to mind, where a real sense of ensemble pervades every frame. In fact, there are certain points at which the actors seem almost too good for the material they have been given. That being said, there is no overstating the fact when it comes to how much they elevate every moment on screen.

Gere still has the wherewithal to embrace the roguish elements of Howard, who was looking for excitement and got more than he bargained for. Keaton seems equally at home toning down the more outlandish elements of her natural charisma, to play second fiddle to an understated Macy. In a wonderfully nostalgic moment, Sam is the epitome of isolation, as he seeks solitude from his overly boisterous wife in cinema. His need for quiet pursuits in comparison to Monica’s clandestine trysts with Howard, provides a perfect counterpoint to Grace when they first encounter each other.

As these two strangers bond over a shared passion, it becomes apparent that Maybe I Do is a film of moments. It addresses the idea of time being a finite commodity as people get older, meaning that who we ultimately spend our time with becomes increasingly important. As much as that undercurrent is played down in favor of more lighthearted moments, there is still some depth to be gleaned beneath the façade.

This might not be Carnal Knowledge in tone or Our Friends and Neighbors in intention, but lurking below the surface of Maybe I Do is something worth exploring. For now, audiences will have to make do with this considered slice of comedy-drama, which throws up some familiar questions without actually digging deep enough to offer up anything conclusive.