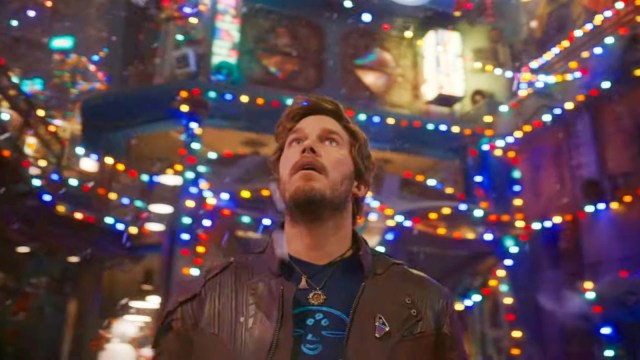 Photo via Marvel Studios
Review of: Review: 'The Guardians of the Galaxy: Holiday Special' fails to answer some important Marvel questions

'The Guardians of the Galaxy Holiday Special' is a huge disappointment. Chris Pratt, Pom Klementieff and Dave Bautista might be in attendance alongside other familiar faces, but the story James Gunn has concocted is unbelievably thin. In truth, only Kevin Bacon seems to be having any fun.

The Guardians of the Galaxy Holiday Special, which hits Disney Plus on Nov 25, might be the answer for some Marvel fans as it kicks off with some promising animated sequences – before segueing into a live-action return to Knowhere.

Having established the importance of Christmas in those crucial opening minutes, an alien rock band injects a little life into proceedings with a rousing musical number. This is the first of two original songs which blatantly tries to distract audiences from the shameful lack of substance on show. For the first time ever, James Gunn is on autopilot here, as these franchise favorite characters scratch around trying to justify their involvement.

Having seen Peter moping around Kowhere still attempting to process the loss of Gamora, Mantis and Drax decide that kidnapping his hero might help improve his mood. A great running joke on its own when surrounded with other story elements, but one that falls flat quickly without anything approaching dramatic support from elsewhere.

In truth, any fault for the lack of substance in this holiday special sits with Gunn, who tries to make Bacon’s kidnap maintain momentum for over 30 minutes. Bautista and Klementieff might work hard to cement their feature film chemistry while exploring Hollywood in search of the Footloose figurehead, but to be honest, they struggle.

Although Mantis and Drax provide some mildly amusing moments of comedy in their time on Earth, there is no getting away from the fact that there is no story. Bacon might appear to be having a ball playing versions of himself, but beyond some strangely appropriate meta moments, The Guardians of the Galaxy Holiday Special does exactly what audiences would expect.

If there are any highlights to be clung to in this flagrant Christmas cash-in, they come in the form of Maria Bakalova (Bodies, Bodies, Bodies) who makes a fleeting vocal appearance as Cosmo the Spacedog. In the brief scenes she shares with Rocket, audiences will be distracted by their comedic chemistry, which should hopefully be expanded on in when Guardians Vol. 3 hits the big screen.

Elsewhere, high points are rather thin on the ground, barring some top tier one liners and staggering production design. Beth Mickle, who is the mastermind behind this audacious slice of world-building, really adds value by transforming Knowhere into a Yuletide utopia. Festive lights, an immense sense of scale, and a glimpse of the wider universe comes through in the latter stages of this show, as Gunn intentionally embraces Christmas clichés.

At that point, having borrowed Bacon from outside his home in Hollywood and deposited him on Knowhere, any pretense at story beats or anything approaching drama is jettisoned. As much fun as this special might be for audiences who want to see their Guardians celebrating Christmas, this really feels like a wasted opportunity.

Gillian amounts to some very talented window dressing as Nebula, while Michael Rooker and Sean Gunn are also underused, even when they participate in this wafer-thin story line. Beyond that, perhaps the biggest crime here is ignoring Pratt, who normally brings so much to the screen as Peter Quill.

Gone are the witty one-liners, sardonic asides and over-inflated arrogance which defines this space pirate. For much of this holiday special the actor simply stands around, while events happen around him, rather than escalating as a result of his involvement. Not only adding to the sense of indifference which some people may feel during this show, but compounding it afterwards as retrospect begins to reveal how lazy this ultimately feels.

For any Marvel fans hoping to discover nuggets of plotline prior to volume three — be warned, the cupboards are bare. This may have all the component parts of a Marvel special with potential, but for most it will feel like a wasted journey to Knowhere. Hopefully, this misguided attempt at a festive special is no reflection on things to come for the Guardians of the Galaxy.

Review: 'The Guardians of the Galaxy: Holiday Special' fails to answer some important Marvel questions

'The Guardians of the Galaxy Holiday Special' is a huge disappointment. Chris Pratt, Pom Klementieff and Dave Bautista might be in attendance alongside other familiar faces, but the story James Gunn has concocted is unbelievably thin. In truth, only Kevin Bacon seems to be having any fun.