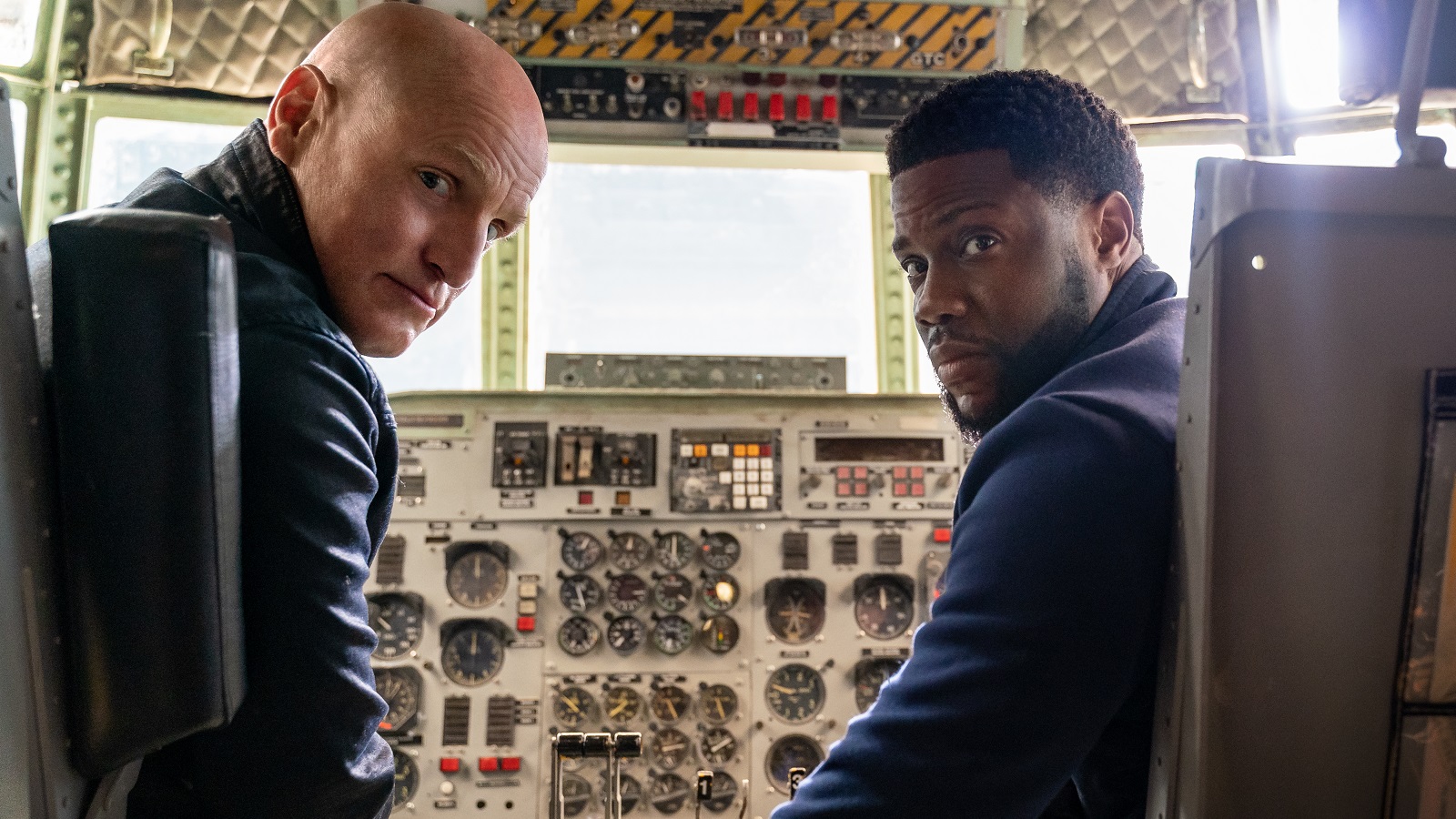 Cr. Sabrina Lantos/Netflix © 2022.
Review of: Review: 'The Man from Toronto' is Hollywood action comedy at its blandest

Kevin Hart and Woody Harrelson could have been a dynamite double act, they just needed a much better movie to prove it.

Netflix has bet big on Kevin Hart, handing the actor and comedian an Adam Sandler-sized deal to develop and star in a slew of exclusive projects, but it would be fair to say the results have been mixed. His stand-up specials fared exceedingly well, and Fatherhood became one of the platform’s most-watched original films ever, but True Story was quickly forgotten about, and now The Man from Toronto is destined to suffer a similar fate after it spends an inevitable few weeks on the most-watched chart.

Similar to the aforementioned Fatherhood, Patrick Hughes’ rote action comedy isn’t an in-house Netflix production, with Sony selling the distribution rights off to the streamer in April of this year. That might have been a wise move, because the pandemic-era box office is still struggling to regain consistent momentum outside of franchise fare, and there’s every chance The Man from Toronto would have flopped given the reported $75 million budget, not to mention the fact it’s in with a genuine shout of being named as the most formulaic genre film of the year, if not the entire 2020s so far.

From start to finish, there is absolutely nothing in this movie that you haven’t seen at least a dozen times before, and they were done better on almost every single one of those occasions. Hart’s Teddy Jackson is a would-be entrepreneur who deals exclusively in terrible ideas, which has left him doing marketing for a local boxing gym, and things have gotten so bad that Jasmine Matthews’ wife Lori confesses that her colleagues have substituted screwing up with the word “Teddy’d”.

In an effort to celebrate his spouse’s birthday in the most lavish fashion possible, Teddy rents out a remote cabin, or at least he thinks he has. When he gets there, he stumbles upon a torturous interrogation waiting to happen, where he goes along with being “the man from Toronto”, who we were previously introduced to in one of the very first scenes as being played by the always-welcome presence of Woody Harrelson.

Sure enough, the black-clad assassin isn’t best pleased with somebody using his identity when there are contracts to be fulfilled, before the two end up forging a tenuous alliance to manufacture an outcome that works to both of their benefits. Rest assured; if you think you’ve got an inkling for where things are heading from the second the two leads are officially acquainted, you’ll almost certainly be right on the money.

Of course, it goes without saying that the odd-couple actioner only has a finite amount of tropes and trappings, but it would have been nice had The Man from Toronto even tried to bring a new perspective or fresh insights from the table. Instead, we get a facsimile of countless other titles, and at points it genuinely begins to feel that the screenplay was written by a bot that had been fed on a steady diet of very similar scripts.

That’s not to say it’s an abjectly awful thing, but sometimes a swing and a miss is a superior option to playing it unrelentingly safe. Hughes is a competent director, of that there’s no doubt, but he’s never made a better film than his feature debut Red Hill. In what surely isn’t a stroke of coincidence, it’s also the only entry in his behind-the-camera oeuvre that’s anything other than a star-powered actioner, with The Man from Toronto fitting right in with his Expendables 3, The Hitman’s Bodyguard, and Hitman’s Wife’s Bodyguard.

Hart sticks to his tried-and-trusted persona, cracking wise and becoming increasingly exasperated as events continue to spiral out of control. As a result, that leaves Harrelson to play the straight man, which isn’t the best use of his talents when history has regularly shown that the actor’s strengths in broad comedic fare are maximized when he’s allowed to lean into his offbeat charisma and twinkle-eyed charm. It also doesn’t help that the humor is too broad and scattershot to generate more than a snigger or a smirk.

There are plenty of visual effects, but they’re barely passable. There are rapid-fire gags, but very few of them stick. There are a handful of fight scenes and action-driven set pieces, but only a smartly-constructed brawl towards the end of the third act packs a real punch. Each and every moment of note contained within The Man from Toronto will only make you think of the other times you’ve seen similar things, and have you longing for the movies in which they happened instead.

An aerial escape sequence with a conveniently placed mechanism to dispatch of the villains? Air Force One has you covered. The two heroes face off against a rival while Hart jumps, climbs, and falls from a myriad of structures suspended high above the ground? Jackie Chan made a career out of it. In the very same scene, he gets shot in the ass à la Bad Boys II. Kitchen and utensil-based brawls? Take your pick. A shadowy and highly nefarious organization led by an enigmatic figure who hides their identity until their real intentions are exposed? Seen it plenty of times. Their distrust and dislike gradually thaws before a mutual respect is formed? Yawn. And yes, there are even fart, poop, and vomit jokes thrown in for good measure.

You may have noticed that this review has barely touched on plot outside of the basic setup, and that’s because it doesn’t matter in the slightest. It’s standard Hollywood hokum that forces our heroes to move from location to location with plenty of double-crosses and opportunities for heart-to-heart bonding peppered along the way, but it’s hard to care about The Man from Toronto because the end product is clearly the result of filmmaking by committee, without a shred of personality, inventiveness, or urgency on display.

Hart is capable of better, and Harrelson deserves better, so we can only hope the duo had fun during shooting, because there isn’t a great deal else to recommend outside of the pair’s best attempts at trying to wring some modicum of entertainment value from the scraps they’ve been given to feed on. The Man from Toronto is virtually guaranteed to play well on Netflix for a while, but then it’ll simply vanish into the ether, never to be seen or heard from again.

Review: 'The Man from Toronto' is Hollywood action comedy at its blandest

Kevin Hart and Woody Harrelson could have been a dynamite double act, they just needed a much better movie to prove it.