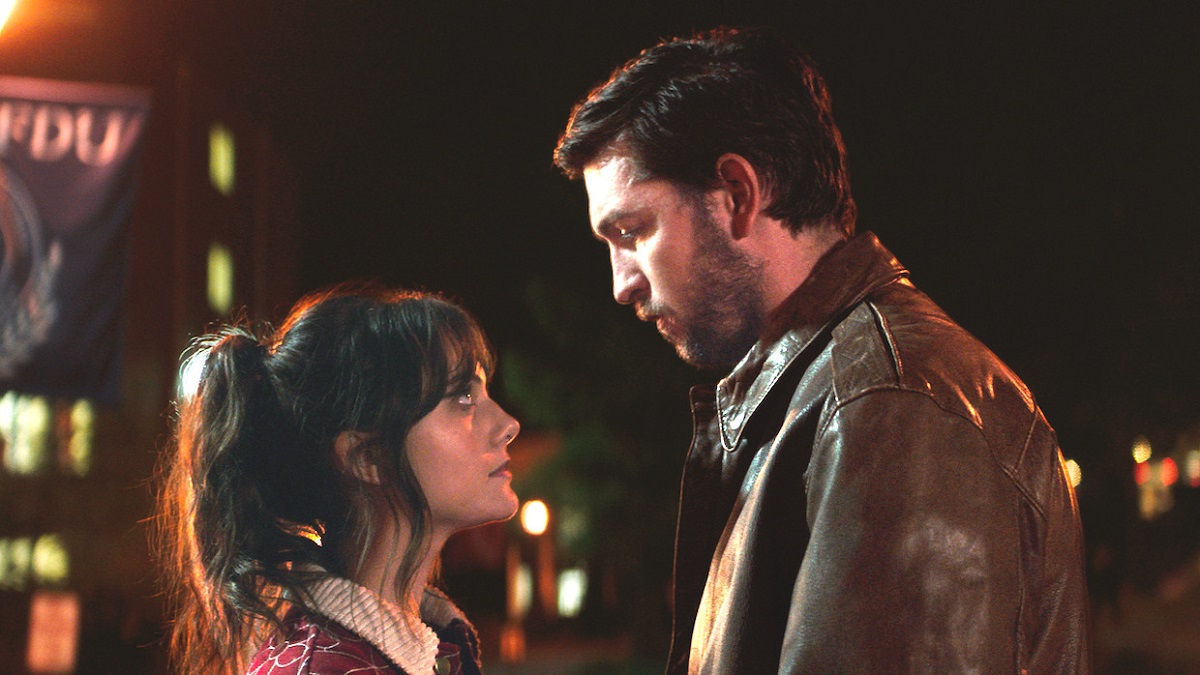 Director Susanna Fogel (Booksmart) and writer Michelle Ashford have created a contemporary talking point in Cat Person, which is sure to promote furious debate this year at Sundance.

Headlined by Emilia Jones (CODA) alongside Nicholas Braun, it explores the world of online dating, with specific emphasis on age gap relationships. Jones’ Margot works the concession stand at her local cinema, which specializes in nostalgic double-bills, and film seasons shaped around certain film stars. Each evening she confers with friends over text message, rating male patrons according to certain criteria.

There is a freshness to this film which circumvents conventional tropes, addressing the shifting sand of app-based dating in 2023. With her best friend Taylour (Geraldine Viswanathan), Margot discusses the possibilities of dating an older man, with a certain degree of rose-tinted naivete, which is only compounded when Robert (Braun) draws her attention one night as he insists on buying Red Vines.

Older, taller, and endearingly awkward on the surface – he appears to fulfill all her requirements. Despite warnings from left and right, Margot embarks on a text-based flirtation with him, which leads to an implied intimacy between them. Director Fogel is savvy enough to mix things up, visualizing every nightmare scenario which Margot imagines in her head, ramping up tensions or playing it for laughs from moment to moment.

At no point are there any illusions about the tightrope topics Cat Person seeks to address, but by offsetting audience expectations through the judicious use of comedy, it makes for a less uncomfortable watch later on. That both Jones and Braun play their roles with such care and consideration, also goes some way to opening up the discussion without judgement.

That being said, Cat Person proves to be an uncomfortable watch despite the narrative devices which seek to alleviate anxieties. Watching the two actors kiss is an excruciating experience, which intentionally goes on far too long, which in turn forces audiences to make a judgement call.

So much of Cat Person requires complicity from the viewer, since Ashford seeks to garner a response by manipulating points of view. The knee-jerk reaction to their relationship, depends on your generational perspective, even though people with significant age gaps found ways to connect long before online dating apps.

Where the real debate lies here, is whether or not internet technology in contemporary society makes people untrustworthy. As much as the early stages of their relationship is conventional aside from the age gap, our accessibility as a society means people are always available. Privacy in an everyday sense is non-existent, meaning prospective partners and former beaus can find anyone online. These are interesting times and the lines are becoming increasingly blurred.

Beyond that, what Cat Person manages to do, despite some intrusive visuals and out of body conversations played out by Margot, is promote debate rather than cast aspersions. Even when pleasant text messages are replaced with panic stricken counter measures, director Fogel still manages to keep tonal control.

Living legend Isabella Rossellini, who has a brief cameo as college professor Dr Z, makes quite the impression, while her ties to this subject matter link back to David Lynch’s Blue Velvet. Another intriguing performance, which exists outside of the narrative, features Fred Melmed (Barry) as Dr. Resnick.

In his all too brief appearance, both Robert and Margot discuss their relationship, by dissecting internal thoughts, which then feed back into the story. This heightened segue, which seeks to normalize all their fears for audiences, adds another layer of debate around this discussion without diluting the overall impact.

Even though the latter stages of Cat Person might seem a touch melodramatic, as houses catch fire, and physical confrontations take center stage, that debate never really goes away. The question of which persona people put out into this world, combine with questions of consent, leaving any answer distinctly open ended.

There is an inherently powerful message conveyed in this film, which tackles a number of contentious topics with care and consideration. With Cat Person, no one is making a bolder statement than Jones in taking on this role, who embodies all the concerns with a genuinely thought-provoking performance. Elsewhere, Braun shows an equal amount of backbone in navigating his way through some dangerous waters as Robert.

If audiences were feeling particularly masochistic, they could always tee up Cat Person with Promising Young Woman – two of the most powerful female stories in recent memory. How about that for a debate-filled double-bill to consider?

Powerful, provocative, and libel to promote debate - 'Cat Person' is a film with plenty to say. Directed by Susanna Fogel and adapted from the short story by Kristen Roupenian, this features Emilia Jones and Nicholas Braun in a hard hitting tale.