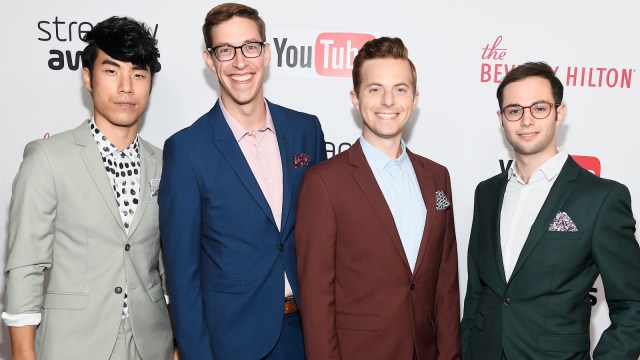 As The Try Guys continues to produce new content on YouTube, fans of the popular channel are wondering whether one of its founding members, Ned Fulmer, will remain a part of the team in light of disappointing news of his extramarital affair.

The Try Guys originated as a BuzzFeed web series in 2014, and chronicled the adventures of its four members, Zach Kornfeld, Keith Habersberger, Eugene Lee Yang, and Ned Fulmer, who were all employees of BuzzFeed at the time. The array of content ranged from experimenting with nail extensions to getting their bones cracked by a chiropractor. The account currently boasts 7.8 million subscribers and hundreds of billions of views across its numerous videos. In 2018 the guys officially left BuzzFeed to create their own production company and have since produced regular content under the 2nd Try LLC umbrella.

On Sept. 27 news broke that founding member Ned Fulmer engaged in an extramarital affair with a coworker by the name of Alex Herring, who is a producer for The Try Guys. Fulmer, who has been married to his wife Ariel since 2012 and with whom he shares two children, released a statement on Twitter addressing the news.

“Family should have always been my priority, but I lost focus and had a consensual workplace relationship. I’m sorry for any pain that my actions may have caused to the guys and the fans but most of all to Ariel. The only thing that matters right now is my marriage and my children, and that’s where I am going to focus my attention.”

Now more than ever, long-time followers of The Try Guys are wondering whether Fulmer will remain a part of the team or be exiled, especially since sharp-eyed fans have picked up on his disappearance from recent videos. Here’s what we know.

The Try Guys officially became The Tri Guys as of Sept. 27, 2022, as confirmed by the brand’s social media accounts. Ned Fulmer, who’s been an active and integral part of the YouTube channel since 2014, was formally booted from the team as a result of “a thorough internal review,” stating an inability to “see a path forward.”

Following the news, Fulmer’s wife Ariel released a statement of her own, thanking those who’ve reached out to her.

Perceptive followers of Ariel noticed that the mother of two removed “wife” from her Instagram bio. Since then, dots have been connected and past quotes unearthed, making her situation all the more brutal. The news of her husband’s affair first broke after one Reddit user posted a series of screenshots of the scandal in question.

Whether Ned and Ariel will work through these new challenges in their marriage is yet to be seen. However, one thing is certain: Ned Fulmer is no longer a Try Guy.