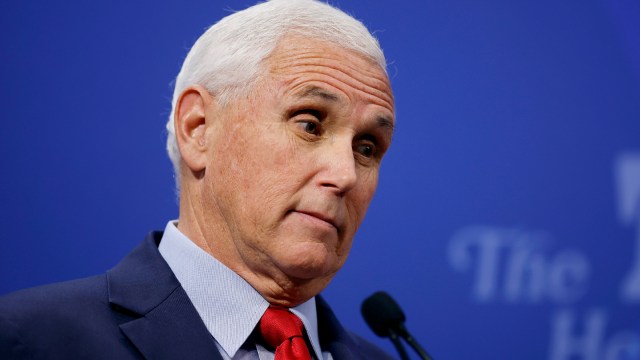 With the 2024 United States presidential election just two years away, both conservatives and liberals are waiting on bated and/or terrified breath to see who the Republican nominee is going to be. And while former Vice President Mike Pence has not officially thrown his hat into the ring just yet, on Wednesday night he expressed who he doesn’t care to vote for — not so shockingly, his old boss Donald Trump.

Pence made the remarks while speaking to students at Georgetown University about the future of conservatism. After his 30-minute long speech, the Indiana native took questions from members of the audience, one of whom asked if Pence would vote for Trump if he becomes the 2024 nominee.

His answer was uncharacteristically candid, as Pence typically evades questions when it comes to the former commander-in-chief. “Well, there might be somebody else I’d prefer more,” he answered, smirking, amid gasps and cheers from the crowd.

“What I can tell you is I have every confidence that the Republican Party is going to sort out leadership,” Pence continued. “All my focus has been on the midterm elections and it’ll stay that way for the next 20 days. But after that, we’ll be thinking about the future, ours and the nation’s, and I’ll keep you posted.”

On one hand, good for Pence, we guess, for taking a stand against a bully? But on the other hand, no sh*t Pence isn’t voting for Trump. The man literally sent his army of thugs after him during the Jan. 6 insurrection, who chanted “hang Mike Pence” as they stormed the U.S. Capitol. And they probably would have done so, had it not been for the quick thinking of the Secret Service — and let’s face it, a good dose of luck — who ushered Pence and his family away to a secure location mere seconds before encountering the angry crowd.

So while some on the internet have applauded Pence for the bravery in his remarks, others are pointing out that it would be pretty messed up if he did admit to planning to vote for Trump — which, let’s face it, he probably will anyway, if it comes down to brass tacks.

As such, there has been no shortage of comments from those on Twitter who were quick to remind Pence that Trump called for his murder.

And while the subject matter may indeed be grim, at least one person came out with a pun at the ready.

It’s still anybody’s best guess whether Trump can rally enough support to run in 2024. Not to mention, all of the various scandals the 76-year-old former president is currently embroiled in — between the Jan. 6 hearings and a $250 million fraud lawsuit, and let’s not forget the tiny matter of Trump hoarding top-secret classified documents at Mar-a-Lago.

But if Trump was on the fence about running whatsoever, Pence’s comments might just have swayed him out of pure spite — with or without his vote.