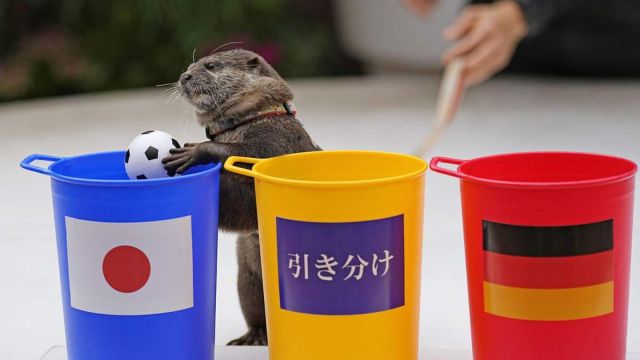 Memories of Paul the Octopus from 2010 have been reinvigorated after an otter managed to foresee one of the 2022 FIFA World Cup’s biggest upsets to date.

Before four-time champions Germany took on Japan in their first group-stage game, animal psychics were again called upon to use their mystical powers. The small otter, Taiyo from Japan, was a patriotic sidekick, with him tipping the Asian nation to beat Germany in an adorable moment.

Much like in 2010, the world has forgone actual, proper predictions and put their faith in animals to help them work out who will win in the biggest tournament on Earth. Presented with an adorable small ball and three buckets adorned with flags of Japan, Germany, and one with “draw”, Taiyo cemented themselves as one of the greatest analysts of all time.

Japan beat Germany 2-1 with a late comeback, making them just the second Asian nation to secure a win at this World Cup. The Blue Samurai previously got past the group stage in 2018 before being knocked out by Belgium. Germany, however, has now lost to Asian opposition two tournaments running.

Whether or not the Germans will seek to reanimate Paul the Octopus is up in the air, as they hope to find a new edge in the tournament they’re widely seen as favorites to win. The octopus famously predicted the winner correctly 85 percent of the time in 2010, including Spain winning the final.

Taiyo will have plenty of pressure on them now, with the eyes of the world firmly watching. Whether or not they have the ability to perform will be put to the test. Taiyo’s octopus comrade died just months after his correct predictions, proving the price for knowledge is massive.

Japan’s next game is against Costa Rica who were soundly beaten 7-0 by Spain.