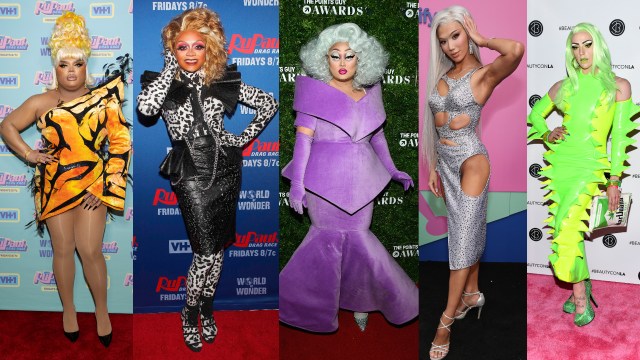 If you can believe it, RuPaul’s Drag Race All Stars is going into its eighth season, which means more fan-favorite queens from years past will battle it out for their chance to be inducted into the Drag Race Hall of Fame.

Coming off the jaw-dropping, all-winners seventh season, the bar is set higher than ever for RuPaul and the producers to step their you-know-what’s up and give the people what they want: another fantastic season full of top-notch drag queens.

Some of the best queens the show has seen have already come in and out of All Stars, so from afar it might look like there aren’t very many queens left to compete. While that’s kind of true, that doesn’t mean there still aren’t queens who wouldn’t hesitate to duke it out for another battle for the crown.

Ahead of the season’s premiere, we’ve compiled a list of 12 queens whom we believe could fit just right in. None of them have officially been confirmed yet, but we think they should be. In order by season, here’s who we think would do great on RuPaul’s Drag Race All Stars 8.

After her surprise appearance as a lip-sync assassin in All Stars 6, Laganja practically secured herself a spot in All Stars 8 should she agree to it. Hailing from the House of Edwards, Laganja and her signature, “Yes, Gawd!” is just what this new season of All Stars needs to really make it shine.

Whether she’ll actually come back is up in the air. If she does, not only will she get the chance to redeem herself from her missteps in season six, but she will also be a clear front runner. And this time, she will not feel attacked, “okurr?”

Can someone please explain why Darienne Lake hasn’t been on All Stars yet? We’re waiting…

Exactly. There’s no good reason why Darienne hasn’t returned to the franchise, especially since she placed top four in her (incredibly talented) season and wowed the judges with some of the most iconic rap lyrics. She has comedy, wit, and the kind of sass All Stars 8 needs to spice things up. Now that she’s on our radar, we can’t imagine the season without her. Our fingers are literally crossed.

Known for her signature anime-style makeup and razor sharp tongue, Kim Chi was, is, and always will be a Drag Race fan-favorite queen. She went toe-to-toe with Bob the Drag Queen and Naomi Smalls in the season eight finale, which is no easy thing to do. Should she return for All Stars 8, she could very well make it to the top again, especially after six years of polishing her drag.

After making it to the top four in season nine and going head-to-head with Sasha Velour, Peppermint solidified herself as a legendary Drag Race queen. Even though she skated by with just one challenge win, it’s been five years since she graced the runway, and there’s no doubt she’d come back stronger than ever. She’s only one of two queens to make it as a runner up with just one challenge win. Her affinity for writing lyrics, her top-notch lip-syncs, and five years of polishing her drag could mean the difference between one win and the win.

If Kameron Michaels isn’t considered a lip-sync assassin after lip-syncing for her life four times in a row and still making it to the finale, then we don’t know what to call her. She is the only queen in Drag Race “herstory” to do so.

Of course, that also meant Kameron landed in the bottom four times, but somehow that never diminished her value. She’s the only muscle queen to make it on RuPaul’s Drag Race. In the name of representing the full spectrum of drag performers, it’s time to bring her back.

She’s a little shy, a little awkward, and with four years between her season and All Stars 8, she really could come back and win it all.

If there’s anyone who would wear the crown proudly, it’s Madame Butterface—ahem—we mean Asia O’Hara. She showed unprecedented compassion to her fellow queens on her season. Sometimes that led others to think they could walk all over her, but Ms. O’Hara is no one to be messed with. She could very well make it to the finale, and if RuPaul slaps her again, she could own the show.

Crowned Miss Congeniality of her season, Nina West is considered a beloved queen in Drag Race herstory. She may have landed only sixth place, but she snagged two challenge wins. Her campy-yet-classy looks and roll-off-the-tongue humor makes this Columbus, Ohio, queen a dark horse should she enter All Stars 8. We don’t know about you, but we could really see her giving all the other queens a run for their money.

Every season needs a good lewk queen, and Plastique is that and more. She serves face; she serves moves; she serves body to the fifth power to the cosign (get it?). Also, she’s the drag daughter of Alyssa Edwards, so seeing her and Laganja in the same season would be the kind of call back we need to relish in the glory days of Drag Race past. Whether or not Plastique will win, well, that’s to be determined. Perhaps we’re just selfish and want to see her serve more lewks.

We are telling you right now, Heidi N Closet will be on All Stars 8.

Okay, we don’t actually know that for sure, but the producers of the show would be fools not to bring her back. Her southern charm, gap tooth, and sense of humor made her not only Miss Congeniality of her season, but also one of the biggest fan-favorite drag queens in Drag Race herstory. She didn’t make it to the top four, but she is only one of three queens in Drag Race herstory to lip-sync for her life four times.

Season 12 might’ve been the most tame, drama-free (and some may say boring) season of Drag Race, but it also had some of the finest performances of the entire series (“I’m That B***h,” anyone?). Gigi Goode might not be able to lip-sync the house down boots, but her eleganza looks can run circles around some of the other queens. Not only is her snatch game and Madonna: The Unauthorized Rusical a staple of recent Drag Race seasons, but hers is the creative mind behind many of season-13 winner Symone’s looks as well. Those finale outfits? Yeah, that was Gigi Goode.

Somebody has to go home first.

No, we’re just kidding. We love LaLa Ri, but we don’t love her “bag look” (what compels a person to think that’s a good look?), and she is a fierce lip-sync performer. If she manages to clean up her act a bit, then she could really do well in All Stars 8. No shade, we really do love her. The potential for greatness is there. Plus, her huge fandom could sway the producers to bring her on the show. We’ll have to wait and see.

Let’s just call a spade a spade: nobody anticipated Kandy Muse making it past the third week of season 13, not with her runway looks and weekly challenges. The potential was there, but the potential to go all the way? Yeah, no.

Before any Kandy Muse fans get upset, she did eventually step up her game and surprise everyone. She brought comedy, controversy, and entertaining lip-syncs. By the end of season 13, most people were like, “Yeah, okay, I can see why she’s here.” Now she’s a fan-favorite drag queen.

Everything about her screams “made for TV.” What reality show wouldn’t want to have her? Plus, who knows, maybe we’ll get another viral Untucked episode like the one shown above. If anyone will spice up All Stars 8, it’s Kandy Muse.