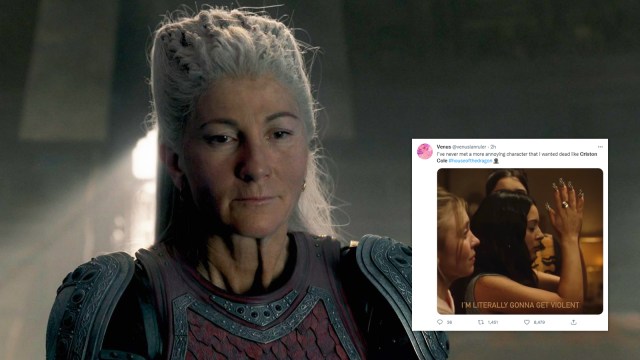 Warning: This article contains massive spoilers for House of the Dragon episode “The Green Council”

Another week means another batch of fresh House of the Dragon memes and while the latest episode was mostly setting up things to come, it still had plenty of moments that social media has thoughts on.

Before we jump into the chaos here is a warning that we will be discussing things that took place during episode nine so spoilers are a given. If you’re worried about being spoiled make sure that you’ve seen the episode before continuing on.

During the episode, we got to see the politics unfold as King Viserys’ death led to Alicent and the small council installing her son Aegon as the new King — of course, this wasn’t without contention.

As those who fought against this decision were slowly taken out Rhaenys escaped her imprisonment and rebelled in her own way which quickly cemented her as the MVP of the episode.

Of course, this wasn’t all that went down. There was also Aegon action, some title jealousy, and even a foot fetish that showed up. Here is all of the action covered by fans on social media.

The new King is here

Criston Cole just gets more hatable with each episode.

The end is near…

While episode nine wasn’t the most action-packed episode to date, it appears that the finale will have you covered on that front. A new preview for the episode showcases all of the dragon action we should expect to see when it launches next week.

In the meantime, you can relive all the action by streaming House of the Dragon on HBO max now.