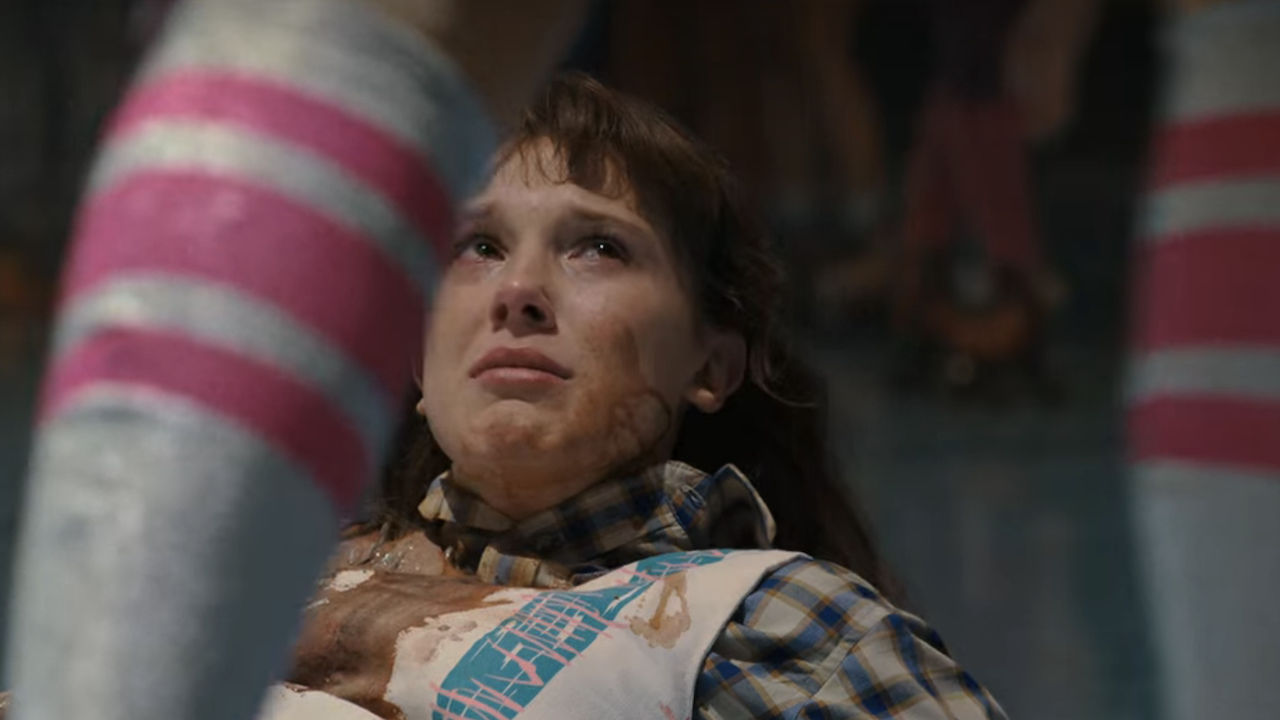 Stranger Things is notorious for its inclusion of pop culture references and a nostalgic vibe that bleeds into each season. And with the fourth season finally here, a whole new batch of Easter eggs are keeping diehard fans intrigued — and considering this season has a major horror vibe, these particular eggs are familiarly spooky and reference plenty of classic horror movies that were insanely popular during the ‘80s.

While some Easter eggs are relatively easy to spot, others are more hidden and require eagle-eyed viewers to pinpoint their location and overall significance. And after season three included a juicy Beetlejuice Easter egg, the creators upped the ante by including a variety of clues that pay homage to vintage horror. Here’s an in-depth guide on the nightmarish Easter Eggs in Vol. 1 of Stranger Things season four.

The Evil Dead franchise was one of the most popular horror franchises of the ‘80s, so it only makes sense that the legendary Sam Raimi vehicle would make an appearance in a Stranger Things season surrounded by horror tropes. During the season four premiere episode, fans get a glimpse of Will, Jonathan, Joyce, and Eleven at their new house in California. And during a scene in Jonathan’s room, where he’s trying to lead the marijuana smoke out of his window, a poster for The Evil Dead is seen on his wall.

While Nancy Wheeler is chatting to Eddie Munson’s uncle Wayne about the murder of Chrissy Cunningham, Wayne compares Victor Creel — a former Hawkins resident who was believed to have killed his wife and children — to Michael Myers, the infamous masked killer from John Carpenter’s 1978 masterpiece Halloween.

Additionally, when Max is walking through a graveyard in the Upside Down, she passes by a tombstone that presumably reads “Myers,” which is another reference to the classic horror film — and could likely be the grave of Michael’s older sister Judith.

A Nightmare on Elm Street

Seeing as the Duffer brothers specifically stated that A Nightmare on Elm Street was a major influence for season four, it’s certainly not a surprise that there are many subtle references to the legendary slasher franchise. For one, season four’s monstrous villain Vecna is a lot like Freddy Krueger, in which he uses dream scenarios and manipulation to stalk his victims.

Another Elm Street Easter egg occurs when Dustin and Max are talking to Robin and Steve inside of the video store, where a life-size cardboard cutout of Freddy Krueger can be seen in the background. Another Easter egg for the Wes Craven vehicle is when Nancy Wheeler becomes stuck in the Upside Down with Vecna, which echoes the main protagonist Nancy in A Nightmare on Elm Street.

One interesting Easter egg in Stranger Things 4 is the name of new character Eddie Munson, who serves as the leader of The Hellfire Club, an interactive Dungeons & Dragons club that Dustin, Mike, Lucas, and Erica all play. As for the Easter egg, Eddie Munson’s name is similar to Eddie Munster — a memorable character from the ‘60s sitcom The Munsters, who was a child werewolf.

Wes Craven’s Scream stands as one of the most influential horror movies of all time, and Stranger Things faithfully echoed a memorable bird’s-eye view shot in the newest season. When Chrissy’s dead body is carried on a stretcher, the camera carefully follows from above and matches the legendary scene from the 1996 original movie.

A major threat for Eleven in the fourth season of Stranger Things is fellow classmate Angela and her group of cronies that bully Eleven at her new school in California. This plot point features a strong similarity to 1976’s Carrie, where a girl with telekinetic powers gets bullied at her high school, only to take revenge by setting the school’s gymnasium on fire in a fit of rage. Considering Eleven possesses similar powers, and gets a chocolate milkshake dumped on her (similar to pig’s blood in the movie), this marks one of the most interesting Easter eggs.

The Silence of the Lambs

In the thought-provoking fourth episode in the new season, Nancy and Robin travel to a local mental hospital to speak with Victor Creel, the man who experienced supernatural occurrences in his home. As the duo walk down the hallway to Victor’s cell, they pass by several strange inmates that evoke fear and verbally harass them — which strongly mimics the infamous scene in The Silence of the Lambs where Clarice encounters Dr. Hannibal Lecter for the first time.