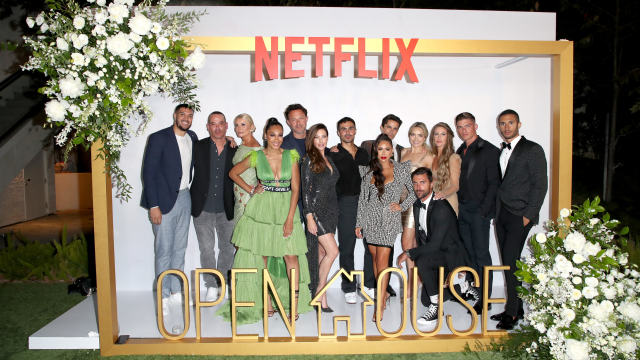 Netflix is expanding its reach on glamorous homes, cars, and real estate agents with a new addition to the Selling Sunset family in Selling the OC.

Selling Sunset first captured viewers’ attention everywhere in 2019. Through five seasons of drama, friendship, heartache, romance, and next-level homes for sale — the Oppenheim group has taken us on a journey through more than a scenic California real estate market.

Jason and Brett Oppenheim have kicked off the new real estate venture in Orange County, California, and they’re going for the gold. Selling the OC will soon introduce fans to a new location, new office, and new eager agents.

What do Jason and Brett Oppenheim have to say about the new cast?

Jason and Brett are close friends with the agents at the office, and it’s expected that they’ll also create close bonds with the new agents. Working in a career field as intense as real estate means they quickly see the best and worst in one another.

In a chat with PEOPLE about the upcoming new series, Jason said they do something better than the cast of Selling Sunset in terms of opening up.

Brett followed up by saying that the new cast benefited from seeing what worked for the Oppenheim group in Los Angeles and what didn’t, and they certainly used that.

“They had the confidence of seeing that if you’re yourself, you’re going to come across as yourself for the most part. That allowed them to be more comfortable, which also led to arguably a better season one than we had. They came out of the gate more comfortable and stronger.”

Having a stronger bond with one another and a stronger sense of self in the game will help them as they make the real estate market their own.

Who are the new cast, and where can you find them on Instagram?

Selling the OC will introduce 11 new cast members in the “Selling” family, and it will be a wild ride. The trailer for the first season shows high-profile homes, high stakes, and high levels of drama — and we’re already invested.

So who will be bringing the heat to the OC? Let’s take a look

Fierce, fabulous, and feisty — Polly Brindle is bringing high class and a top-notch attitude to Selling the OC. She’s a dog lover, a seriously powerful real estate agent, and someone who values time with loved ones.

Kayla Cardona can’t believe Selling the OC is almost here, and we can’t either. Cardona is passionate about real estate, loved ones, and fitness — and she’s going to bring the fire to Netflix next week.

Mother, real estate agent, and animal lover — Alexandra Hall is ready to sell homes (on screen) and win over audiences when Selling the OC begins streaming this month. She’s as confident as she is gorgeous and she’s never fully dressed without her winning smile. Hall will undeniably bring a passion for real estate to the Oppenheim Group.

Keeping up with trends in real estate is just another day for Gio Helou, a man who intends to waltz into Selling the OC with passion and talent. Helou has already had a powerful bell-ringing moment, and if that’s any indication of his dedication, we’ll see several in the upcoming series.

Realtor, powerhouse, and total beauty, Alexandra Jarvis is ready to show you her skill at the Oppenheim Group. Her Instagram profile shows that she’s already been part of a “record sale” with the brokerage, and we’re sure it’s not her last.

Brandi Marshall is a real estate agent with the Oppenheim Group, and Selling the OC will showcase her talent, zest for luxury homes, and her love for her family. She has the drive to be successful no matter what, and that can-do attitude is exactly what she needs to thrive in this market.

Ready to light the real estate market on fire for audiences worldwide, Sean Palmieri is a realtor for the Oppenheim Group and a talented one at that. He seems like a total charmer and a driving force for the agency.

Real-estate agent and nature lover, Alexandra Rose brings her A-game to each sale at the Oppenheim Group. She plays as hard as she works, and it’s evident that she’s a significant player in the real estate game.

Dog mom, real estate agent, and overcomer — Lauren Shortt is powerful beyond what you might initially expect. She’s a heavy hitter in the Oppenheim Group and has a story of survival and gratitude for the life she lives today. We have a feeling Shortt will be an easy fan favorite.

Tyler Stanaland calls himself an ocean dweller and home seller, and you can tell there’s not much he loves more than a day at the beach. He’s also a dog lover and husband to an actress you might just know and love — Brittany Snow. His drive and passion for real estate will likely be at the forefront of the series.

Austin Victoria brings power, passion, and a zest for luxury to Selling the OC — and, new to the area, he’s familiar with the real estate market. He’s passionate about friends, family, fitness, and selling homes. Victoria is playing no games when it comes to making the moves, and we’re sure we’ll see some stand-out moments from him.

You’ll be able to get very familiar with the newest Oppenheim agents because Selling the OC is gearing up for a premiere on Aug. 24. If you can’t wait until then, Selling Sunset is streaming on Netflix now. You’ve got just enough time to binge it while you wait to meet the new Oppenheim Group realtors. They’re not here to play — unless they’re at the beach.