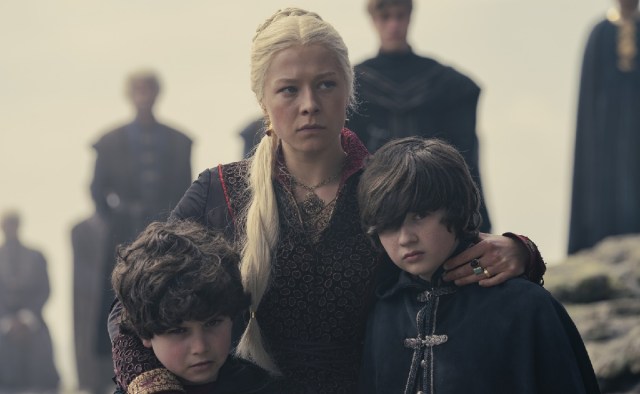 Warning: This post contains spoilers for House of the Dragon and Fire & Blood.

House of the Dragon is notorious for multiple time jumps throughout its first season. Many time jumps bring about many casting changes as characters inevitably age and with a seemingly revolving door of child characters, viewers are bound to get confused about which kids are which.

After the six-year time jump in episode eight, we haven’t had any more sizable jumps so, thankfully, these actors seem like they’ll be around for a while. However, seeing children become young adults within the span of an episode has made it necessary to clear up some of that confusion.

Rhaenyra is one of the important characters in the show and her children are featured prominently, specifically in these later episodes of the first season. As viewers of the season finale know, her children play an important role in the upcoming Targaryen civil war as well. Here’s a list of all of Rhaenyra’s children in the show House of the Dragon.

Jacaerys “Jace” Velaryon is the oldest son of Rhaenya and Laenor Velaryon, officially. It’s an open secret that Jace’s father is actually Ser Harwin Strong, his mother’s lover. As the oldest son, Jace is the heir to the Iron Throne after his mother (or he would be if not for Alicent naming her son Aegon the current king) and currently resides in Dragonstone with his family. As of episode 10, Jace is currently heading to the Eyrie and then Winterfell to remind the houses residing in the North that they are meant to support his mother’s claim to the throne. We can only hope that he fares better than his brother on his diplomatic journey.

Lucerys “Luke” Velaryon is the second child of Rhaenyra and Laenor, but happens to bear a strong resemblance to Ser Harwin Strong just like his older brother. When he was 5-years-old, he famously blinded his uncle, Aemond Targaryen, in one eye after the older boy broke his nose. This eventually comes back to haunt him in the season finale when Aemond ends up (somewhat inadvertently) killing Luke and his nephew’s dragon Arrax when the two meet at House Baratheon on their individual quests to convince the House to support their family’s respective claims to the Iron Throne.

Joffrey Velaryon (the tiny one in the above picture), is the youngest son of Rhaenyra and Laenor, but we think you know what that means by now. Joffrey, almost certainly another son fathered by Ser Harwin Strong, was named after the Laenor’s late lover, Joffrey Lonmouth who was murdered at their wedding by his own brother. As of episode 10, Joffrey hasn’t done much and if the book is anything to go by, he won’t be allowed to do anything during the Dance of Dragons for some time.

Aegon Targaryen is the first son of Rhaenyra and her second husband Daemon Targaryen (who’s also her uncle but that’s par for the course with the Targaryens). The two marry after they both lose their spouses in pretty tragic circumstances and have children together. They name their first son together Aegon after the first Targaryen king, Aegon the Conqueror. As Alicent also named her first son Aegon, she is obviously not happy about this choice but we don’t think Rhaenyra cares much for the opinion of her former best friend turned stepmother. Aegon, like his younger brother, is very young in the first season of the show so he hasn’t had much of a chance to do anything of note yet.

Viserys Targaryen, not to be confused with the late king pictured above, is the second son of Rhaenyra and Daemon. He is still a baby as of episode 10 of House of the Dragon so he hasn’t done much in the show. He is named after his grandfather/uncle, King Viserys Targaryen.

Visenya Targaryen is the third child and only daughter of Rhaenyra and Daemon. In the season finale, Rhaenyra goes into early labor after hearing news of her father’s death and her half-brother Aegon claimed the Iron Throne and was subsequently named King. Rhaenyra (graphically, please take caution if you haven’t watched the episode yet), gives birth to a stillborn and buries her child the same day. The show doesn’t make it clear, but according to Fire & Blood, the queen gave birth to a girl and named her Visenya.