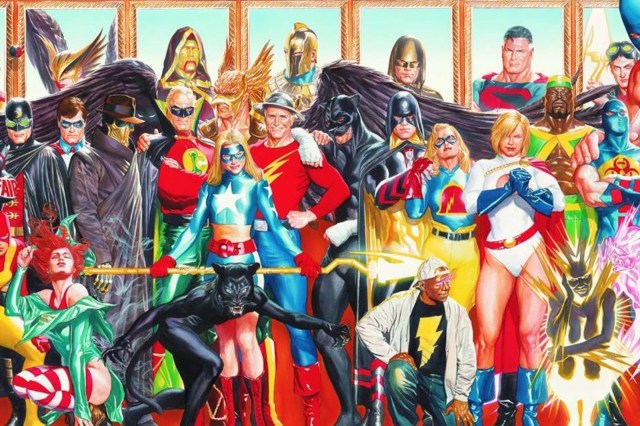 Before there was the Justice League of America, there was the Justice Society of America. Comprised of iconic characters predating many of today’s favorites, the JSA has stood the test of time with many incarnations of the team rising over the decades, and they’ve had multiple live-action appearances. The Dwayne Johnson-led Black Adam features the JSA but it will not be the first.

It all started with the JSA’s history in the Golden Age of comics. Before becoming DC Comics, National Comics and All-American Comics created the comic book series All-Star Comics which featured various superheroes. These stories introduced Flash/Barry Allen, Green Lantern/Alan Scott, Hawkman, and many more to the world and changed the course of DC Comics forever. All-Star Comics issue #3 from Gardner Fox and Sheldon Mayer was released in the winter of 1940 and the team officially formed.

The members consisted of the Flash, Green Lantern, Doctor Fate, Hawkman, Atom, Hourman, Sandman, and the Spectre who came together to meet for dinner first before going to protect the world against great evil. Their origin was heavily influenced by World War II. The JSA fought Adolf Hitler himself after the German chancellor wreaked havoc with the magical Spear of Destiny. His goal was to use it to control all of Europe, and when Franklin Delano Roosevelt learned of it, he enlisted a group of “Mystery Men” to stop him. This group of super-powered individuals would later officially become the JSA, and its stories like these that prove comic books have always been political.

The JSA has been gaining popularity in the 21st century and it has branched outside of the comic book pages. Here are all the live-action appearances this legendary super-team has made.

The superpowered teen drama Smallville had a smorgasbord of superhero cameos, and seated at the top of that list has to be the JSA. JSA characters had been appearing in the show since season four, but in the season nine two-parter, “Absolute Justice,” members of the team officially come back together. In this universe, the JSA were secret crimefighters from the 1970s who had since retired and some heroes had even died. Hawkgirl was killed in battle and Hawkman went after the killer, Joar Mahkent (Icicle), which left the villain in a catatonic state. After the team refused to unmask themselves at the behest of the government agency Checkmate, they went on the run and disbanded to save themselves.

In “Absolute Justice, Part 1,” Sylvester Pemberton, formerly the Star-Spangled Kid, finds Chloe Sullivan and reveals what he knows about Clark and his superteam. Icicle appears and kills Sylvester, sending Clark and Chloe on an investigation. Clark discovers the former JSA base of operations and in “Absolute Justice, Part 2,” he meets Doctor Fate, Hawkman, and Stargirl. Doctor Fate and Hawkman aren’t so certain about returning to their superhero lives because of their difficult past, but Stargirl is adamant about catching the killer that’s hunting them down. To make matters worse, Lois Lane learns about Checkmate and its dangerous director, Amanda Waller.

The Justice Society of America had its World War II history restored in the Arrowverse. They were formed by the U.S. government as a top-secret organization of super-powered heroes who fought villains and Nazis alike. They answered to the President of the United States and their headquarters was a training facility disguised as an abandoned warehouse. The team included Hourman, Commander Steel, Obsidian, Stargirl, Dr. Mid-Nite, and later, Vixen. Hourman was the leader of this group and he has the power of super strength for one hour at a time.

In Legends of Tomorrow season 2, episode 2, “The Justice Society of America,” the Legends discover a time aberration affecting the JSA and travel to Nazi-occupied Paris to help. When the two teams meet, they get into a fight and the JSA wins because of their years of teamwork and practice compared to the fresh-faced Legends. Nate/Commander Steel II meets his grandfather and has to keep his lineage a secret because it would affect the timeline, but when items start vanishing from their persons, the Legends realize they’ll soon fade away and they must complete this mission before it’s too late.

DC’s Stargirl takes place on Earth-2 and the series begins with the death of the Justice Society of America. Starman, Hourman, Doctor Mid-Nite, and Wildcat battle the Injustice Society of America, a team of supervillains bent on world domination. Only Pat Dugan, Starman’s sidekick Stripesy, lives to tell the tale — or more accurately keeps it a secret. Ten years go by, Pat has a son, Mike, and marries a woman named Barbara Whitmore. Barbara’s spunky daughter Courtney isn’t Pat’s biggest fan and to make matters worse, she has to move from California to Blue Valley, Nebraska.

In her new home, Courtney finds a box and finds the Cosmic Staff, Starman’s powerful weapon, and takes it out for a spin. The staff is sentient and she practices with it, using it to fly around and perform gymnastic moves. Pat finds out and tells her about his sidekick days and Courtney adopts the name Stargirl, inspired by Starman, but things get serious quickly. The ISA, led by Icicle, has returned and they’re planning to restore traditional values by killing millions of people and manipulating the rest of the population. Stargirl then commits to forming the new JSA; Hourman II, Wildcat II, and Dr. Mid-Nite II, who are all kids her own age that take up these mantles to stop this growing threat.

The Justice Society of America will be featured in the Black Adam movie with the purpose of taking the titular anti-hero down. In the trailer, it’s Amanda Waller (Viola Davis) who approves the team traveling to Kahndaq to get the job done, and it’ll take the combined might of Doctor Fate (Pierce Brosnan), Hawkman (Aldis Hodge), Atom Smasher (Noah Centineo), and Cyclone (Quintessa Swindell). This is the first time Cyclone has ever appeared in live-action, and a version of Atom Smasher appeared in The Flash season two, episode two, “The Man Who Saved Central City.”

Hawkman has a notoriously convoluted history in the comics that has gone through many iterations. His origin story will be streamlined in Black Adam. Hawkman is a Thanagarian who reincarnates every time he dies, but he won’t have any previous connections to Black Adam, who existed 5,000 years ago. He’s a driven leader with a strong sense of justice, but Black Adam makes him question his methods. Thankfully, Hawkman’s partnership with the sorcerer supreme Doctor Fate helps point him in the right direction when times get tough.