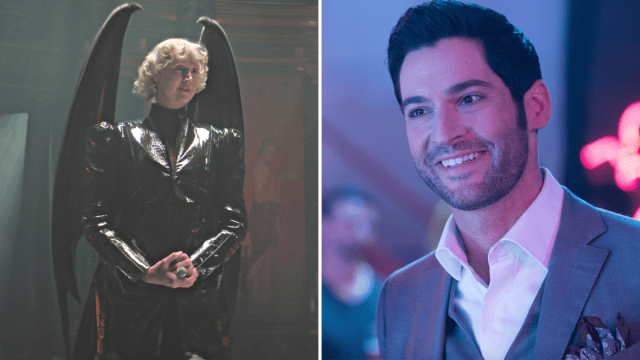 Netflix’s The Sandman is finally about to premiere this August, bringing to life the seminal comic book saga that began over 30 years ago. The Sandman comics have always been hugely popular with fans as they occupy their own unique corner of the DC universe, exploring the beings far more powerful than mere lowly superheroes, like Dream himself and his immortal siblings, the Endless.

But Netflix viewers already have some knowledge of the celestial side of the DC world thanks to Lucifer. The supernatural detective drama, starring Tom Ellis as the titular fallen angel, originally ran on Fox before Netflix picked it up for its final three seasons — which proved to be a mighty fine move as Lucifer stands as one of the streamer’s most enduringly popular shows.

Those who pay attention to the credits will notice that The Sandman creator Neil Gaiman receives a mention in the opening credits of every Lucifer episode, alongside Sandman artists Mike Dringenberg and Sam Keith. DC comics readers may be familiar with the relationship between the two, but if you’re coming into The Sandman cold, then you might be wondering how Lucifer links up with the brand-new series. So, let’s examine if and how these shows are connected.

For starters, yes, there is a connection between Lucifer and The Sandman as the hit Fox/Netflix show is a loose adaptation of Neil Gaiman’s version of the King of Hell from his Sandman universe. Specifically, the series used the spinoff Lucifer comic book as a launching pad.

In that comic, written by Mike Carey, Lucifer has grown bored with ruling the Underworld and has relocated to Los Angeles, running a nightclub called “Lux.” Gaiman previously established this development in Sandman Vol. 9, “The Kindly Ones.”

This basic set-up was reused for the TV series, although a police procedural element was added in, with Lucifer now aiding the LAPD in solving crimes on the side. While supporting characters like Amenadiel, Lucifer’s angel brother, and his demon friend, Mazikeen, were lifted from the comics, most — e.g. Lucifer’s love interest Chloe Decker — were original creations for the screen.

Nevertheless, Netflix’s Lucifer paid homage to its roots when Neil Gaiman himself provided the voice of God for an episode in Season 3. When God finally appeared in the flesh in Season 5, however, Dennis Haysbert took over the role.

Are the two Netflix shows set in the same universe?

While it’s true that Lucifer is based on The Sandman universe’s depiction of the Devil, it has been confirmed that Netflix’s The Sandman doesn’t share any continuity with its sister-series Lucifer.

When it was first announced that the show would be coming to Netflix, fans thought that it might lead to a crossover with Tom Ellis reprising his role. As it so happens, Game of Thrones star Gwendoline Christie ended up being cast in the part. While Gaiman has previously admitted that Ellis was briefly considered for the show, producers ultimately elected to go in a different direction in order to remain more faithful to the source material.

The EP restated his thinking behind the recast in response to a fan on Twitter. “Because [Ellis’] Lucifer, while inspired by the Lucifer in Sandman, is so far away in terms of Sandman continuity by the end of LUCIFER, that it’s easier on everyone to go back to the version in the comics,” Gaiman explained. “And this way you don’t know what our Lucifer is going to do. Tom’s is lovable.”

While the two series might both stream on Netflix, Lucifer and The Sandman are not part of the same canon. Nonetheless, they are connected by their status as DC productions. The CW’s “Crisis on Infinite Earths” event established that every single piece of DC live-action screen media is set within the same multiverse. Lucifer‘s Earth, for example, was categorized as Earth-666 (obviously).

“Crisis” revealed that Ellis’ Lucifer had experience with encountering beings from other Earths, sharing a history with Earth-1’s John Constantine (Matt Ryan). So, while it’s unlikely to become a reality, fans can always make it part of their headcanon that Ellis’ Lucifer and Christie’s variant have met at some point off-screen.

The Sandman launches Aug. 5 on Netflix. All six seasons of Lucifer are available to stream now.