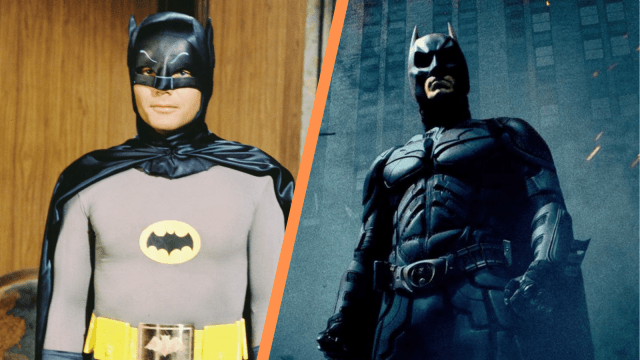 Christopher Nolan’s The Dark Knight trilogy is known for being a darker and more grounded adaptation of Batman, particularly in comparison to its live-action predecessors by Tim Burton and Joel Schumacher, and, even further back, the 1966 TV series starring Adam West.

Which makes this scene comparing the final big action set piece of Nolan’s trilogy to an episode of the Adam West series all the more hilarious, comparing Bale piloting the bat to get a nuke as far away from Gotham as possible, to West goofily tossing a bomb in the ocean.

The tweet was shared to Reddit by u/Key_Squash_4403 and sparked a discussion around how the TV series from the 60s may have had more of a lasting influence on future takes on the caped crusader than is immediately obvious, despite its campiness in comparison to its successors.

In particular, u/LittleYellowFish1 pointed to a post made by u/ChamarMoore last week highlighting the similarities between the reveal of Heath Ledger’s Joker in the iconic bank robbery sequence during the opening of The Dark Knight to Cesar Romero removing an extremely similar mask in the Adam West era.

The best portrayal of Batman over the years has been a point of contention among fans for the longest time, but one of the men who have donned the bat cowl, George Clooney, had a few thoughts on who played Bruce Wayne best while speaking at the Roybal Film & Television Magnet School.

Nicholas Cage has been expressing interest in playing a very obscure Batman villain which would almost certainly bring back some of that Adam West-era campiness. Robert Pattinson is expected to continue his stint as the caped crusader in the confirmed sequel to this year’s The Batman.